Australia, the oldest continent on earth, is home to many interesting species such as kangaroos, emuls, spiny anteaters and punk hair grasses. But that’s not all. Its oldest continent is also home to the oldest known form of life. So much so that scientists believe that the origins of this form of life go back to the beginning of time.

The scientific name for these creatures, also known as living fossils, is stromatolite. The Greek word “stroma” means bed, mattress; “lithos” means rock. Stromatolite literally means “layered rock”. These ancient rocks are believed to be three quarters of the age of the solar system.

To simply describe it, stromatolites are stony structures built by colonies of microscopic organisms called cyanobacteria, which have the ability to perform photosynthesis. As sediment builds up in shallow water, bacteria grow there. These bacteria bind sediment particles together. These layers, whose thickness is measured in millimeters, pile on top of each other, eventually resulting in huge boulders.

These small creatures have a very important task for the history of the Earth: to breathe. Using the sun’s energy, these bacteria began to produce oxygen, bringing the total amount of oxygen in the Earth’s atmosphere to around 20%. In this way, they provided the necessary conditions for all other living beings on earth.

SOME LIVE, SOME FOSSIL

Living stromatolites can only be found in a few salty lagoons and bays on Earth. Western Australia is famous for its different types of stromatolites. Some of the stromatolites here are still alive and some are fossilized.

The oldest known stromatolite fossils in the world are located about 1,000 kilometers to the north, near Marble Bar in the Pilbara region. These fossils are about 3.5 billion years old. Considering that the age of our planet is calculated at 4.5 billion, they are the only living things that have witnessed what the Earth was like long before the emergence of plants, animals and humans, when the continents were still forming.

In addition to Australia, it is possible to encounter stromatolites in shallow waters in places like Brazil, Mexico, America, southern Kazakhstan, the Ural Mountains, and the Bahamas. In Turkey, there are stromatolite formations at the bottom of Lake Salda. The lake gets its blue-green color from here. 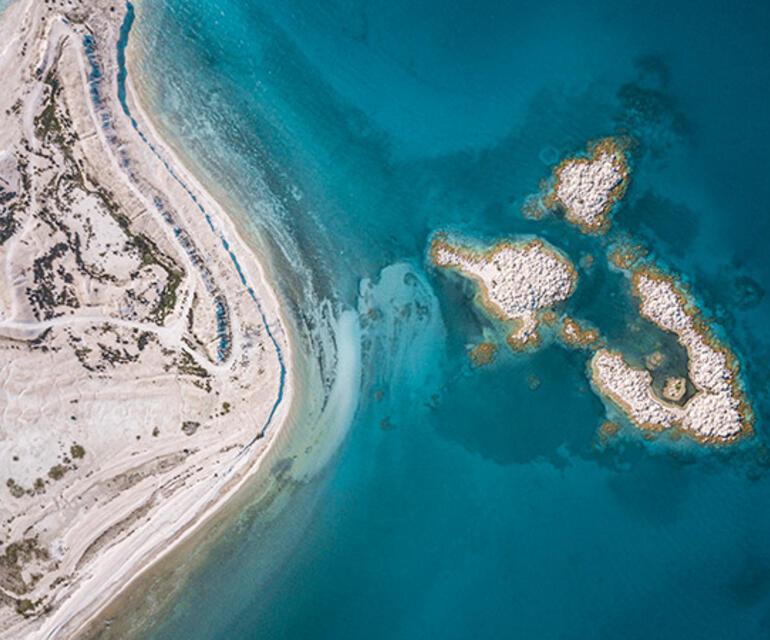 In addition to Australia, it is possible to encounter stromatolites in shallow waters in places like Brazil, Mexico, America, southern Kazakhstan, the Ural Mountains, and the Bahamas. In Turkey, there are stromatolite formations at the bottom of Lake Salda. The lake gets its blue-green color from here.

LAKE THETIS IS FAMOUS FOR ITS STROMATOLITES

One of the areas where stromatolites are concentrated in Western Australia is Lake Thetis. From afar, stromatolites look like herds of turtles with their heads underwater.

The depth of the lake is just over 2 meters and the salinity level is twice that of the sea. When the sea level collapsed during the last major ice age, there are about 4800 years ago, Lake Thetis isolated itself from the rest of the water. The shores deepened, the dunes of the beach surrounded the water and formed the lake. It is estimated that the stromatolites have been there for about 3500 years.

Thanks to the bridge built over the lake, tourists visiting the area have the chance to see the stromatolites from above.

The 1.5 kilometer walking path around the lake is also open to tourists. However, it is forbidden to get too close and touch the stromatolites. Because in the past, some of the significance of these ancient ruins have been damaged by people walking carelessly over them. Therefore, contact is no longer allowed. 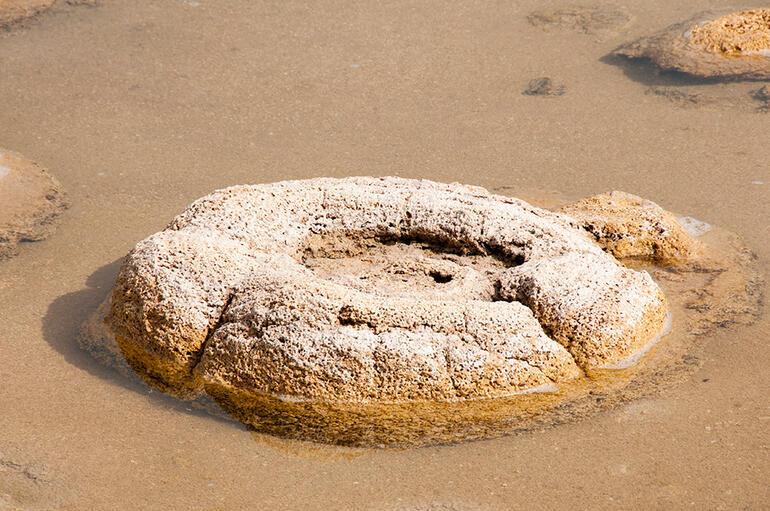 Another remarkable feature of this region is thrombolites, which are relatives of stromatolites. During the evolutionary process that began about 1 billion years ago, stromatolites gradually disappeared, giving way to these young cousins.

Western Australia is also home to one of the largest thrombolite sites in the world. Clifton Lake is also the largest trompolite area in the Southern Hemisphere.

This region recently caught the world’s attention thanks to a documentary. Known for his studies in particle physics at the University of Manchester, Prof. Brian Cox traveled to Clifton Lake for the documentary “Wonders of the Universe”, which he hosted. Thanks to his fascination with thromboliths, which Cox describes as “strange rock masses in shallow water”, many travelers have flocked here to see what Cox calls “the first life on Earth” again.

The word thrombolite comes from the same root as thrombosis. Thrombosis is the medical term for what we call a “clot” in everyday life. Thrombolites look like a blood clot, while stromatolites have a layered appearance.

A former University of Western Australia scholar, Dr. Linda Moore, says stromatolites, whose ecosystems were on the verge of extinction, began to decline as more advanced marine life emerged and proliferated. Predatory amoebas and other single-celled organisms called foraminifera (holes) used their finger-like appendages to wrap themselves around stromatolites, disrupting their layered structure.

Stromatolites needed salt water to survive in which other species could not live. Thrombolites came to the fore in this adaptation process. They managed to survive and reproduce in waters less salty than the sea. Thanks to their clot-like tissues, they were able to coexist with other microscopic creatures. The origins of the Clifton Lake thrombolites, which are now 2000 years old, date back to the earliest thrombolites. 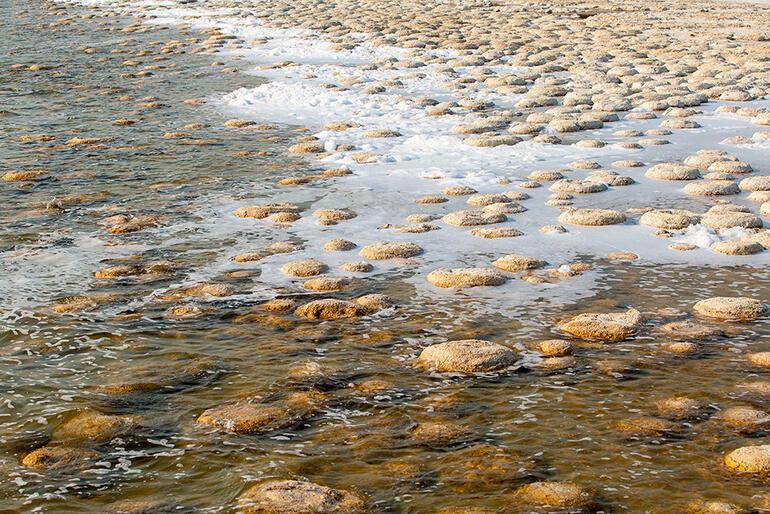 LIFE STARTED WITH THEM FOR THE PEOPLE OF THE REGION

Here, too, tourists have the chance to see the thrombolites up close, thanks to the pier that stretches across the lake. If you look closely, you can clearly see that the small bubbles of oxygen are rising above the water, that is, the thrombolites are breathing.

The origins of Thromboliths are told in the myths of the Noongar people living in the region, which form the basis of the belief system called Dreamtime and which have been passed down from generation to generation. It is said that the Noongars living in arid lands prayed to the sea for the purification of their waters. Its creator emerged from the sea, transforming into a female serpent named Woggaal Maadjit.

Woggaal Maadjit has formed an estuary through the dunes. She laid her eggs (thrombolites) there and surrounded them with her trunk (the dunes guarding the lake) to protect them. As the baby snakes hatched from the eggs, rivers emerged. When the baby snakes were about to die, they dug underground tunnels to Dreamtime. Water springs gushed from here. These water sources also provided the fresh water needs of the Noongar people.

IT ALSO HAS A SCIENTIFIC BASIS

When we examine this narrative from a scientific perspective, we see this: microbial thrombolites perform photosynthesis using fresh water from underground water sources and energy from sunlight. As the resulting oxygen mixes with the atmosphere, calcium carbonate (limestone) becomes a precipitate. Groundwater, which is low in salt and nutrients and rich in alkaline substances, plays an essential role in the growth and survival of thrombolites. The slightest change in environmental conditions endangers the existence of these creatures.

Clifton Lake is a very sensitive environment. In 2009, thromboliths were included among the endangered species and are now protected by the Ramsar Convention (Convention on Wetlands of International Importance, especially as Waterfowl Habitat). Another such protected place in Australia is Kakadu National Park, which is on the World Heritage List. In this park, many different ecosystems of the continent are protected together.

The Ramsar Convention takes its name from the Iranian city of Ramsar, where it was signed on February 2, 1971. Turkey has been a party to this international agreement since 1994. Under the Ramsar Convention, 13 wetlands are under protection in our country. These are Lake Manyas Kuş, Akyatan Lagoon, Gediz Delta, Göksu Delta, Kızılırmak Delta, Kızören Pitcher, Lake Burdur, Lake Kuyucuk, Lake Seyfe, Lake Uluabat , Lake Meke, Sultan Marshes and Yumurtalık Lagoon.

These stones, which are the first examples of life, need protection. Climate change affects the salinity level of the lake. With increasing urbanization in the region, the amount of food flowing into the lake is also increasing. This causes an algae bloom. Algae covering the surface of the lake prevent sunlight from reaching the bottom of the water and smother the thromboliths.

More than 100 years of human stress have made it difficult for these ancient organisms to survive. Much like Woggaal Maadjit, the serpent in Dreamtime’s tale of the Noongars, humans must do all they can to protect them.