The 1915 Çanakkale Bridge, which was inaugurated yesterday by President Erdoğan, was the last structure built with the build-operate-transfer model, also known as public-private cooperation. Late Welfare Party Chairman Necmettin Erbakan’s criticism of the Build-Operate-Transfer model has become the social media agenda. In his speech in the video in question, Erbakan criticizes the Build-Operate-Transfer model on the grounds that “the future is mortgaged”.

After the opening of the Çanakkale Bridge, a video that quickly spread on social media was on Turkey’s agenda. Necmettin Erbakan, the late chairman of the Welfare Party, in the video. Build-Operate-Transfer ModelHe understands the criticisms he brings. In his speech in the video, Erbakan said: “My dear friends, it seems that neither with privatization nor with this new tax law nor with the build-operate-transfer model. Build-Operate-Transfer means selling the future. In the future you will get 200 lira of electricity for 1200 lira and sell it to others, and in 40 years everyone will pay 200 lira of electricity for 1200 lira kilowatt hours. So we are already selling the future, dividing it up and crushing it. It’s not going to happen like that, why should we take this budget seriously and speak up for God’s sake?“, he criticizes.

President Erdoğan was proud of the work that emerged in the speech he gave at the opening ceremony of the Çanakkale Bridge. In his speech, Erdogan said, “Our 1915 Çanakkale Bridge is the last bridge we built with the build-operate-transfer model, also known as public-private cooperation. I hope we won’t stay here for the rest. Although this model has a 30-year history in our country, the most successful examples have emerged in our time. 134 countries in the world use this model in different sectors. We rank third in Europe and 13th in the world in terms of public-private cooperation. performance model. With this method, Turkey has made an investment of 37.5 billion dollars in the last 20 years, in the transport sector alone. In other words, they did it by bringing them in from outside, not our own money. They have contributed 395 billion dollars to our national income, 838 billion dollars to production, 1 million people to employment, if we were to make the same investments with only budgetary resources, we would have to wait decades. A declaration.

WHAT WILL THE CANAKKALE BRIDGE COST TO THE CITIZEN?

For the 1915 Çanakkale Bridge, which was built with the Build-Operate-Transfer model, a daily passage of 45,000 vehicles was guaranteed. In the warranty given, the costs per vehicle were 15 euros + VAT. Since these fees determined in the contract are updated according to the inflation of the Eurozone, the transition guarantee will be 17.7 euros (290 TL) for 2022 when the inflation at the end of 2021 is calculated.

As a result, the bridge’s annual guarantee costs were around €380 million, and the total amount of state guarantee to be granted during the period of operation was around €6 billion. 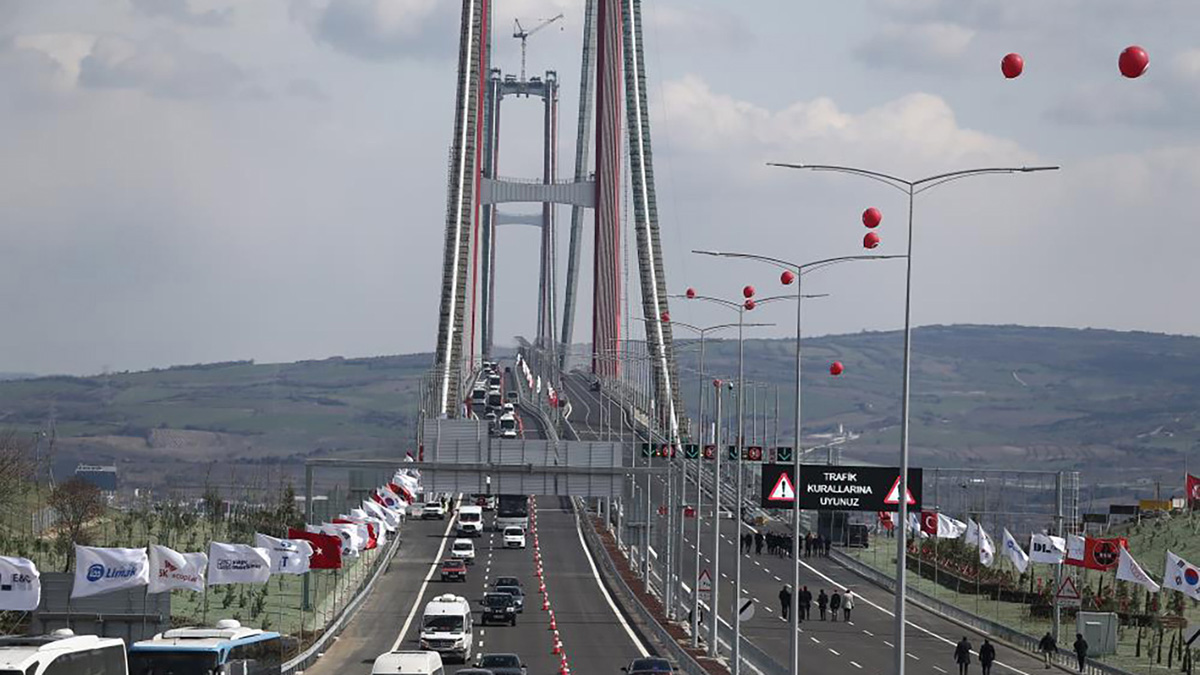 Construction of the 4.5 kilometer long bridge was completed 1.5 years ahead of the date promised in the tender. The bridge was due to open on February 26, President Erdogan’s birthday. However, the opening was postponed to March 18, Çanakkale Victory and Martyrs Day. Announcing the postponement on his Twitter account, Erdogan said: “At the request of our fellow citizens, we have decided to carry it out on March 18, the anniversary of our Çanakkale victory.”

According to Çiğdem Toker, the spokesperson, the state left 15 million euros in the pocket of the 21-day delay. Thus, taking into account the daily guarantees of the contract, this postponement brought in approximately 15 million euros to the Public Treasury. 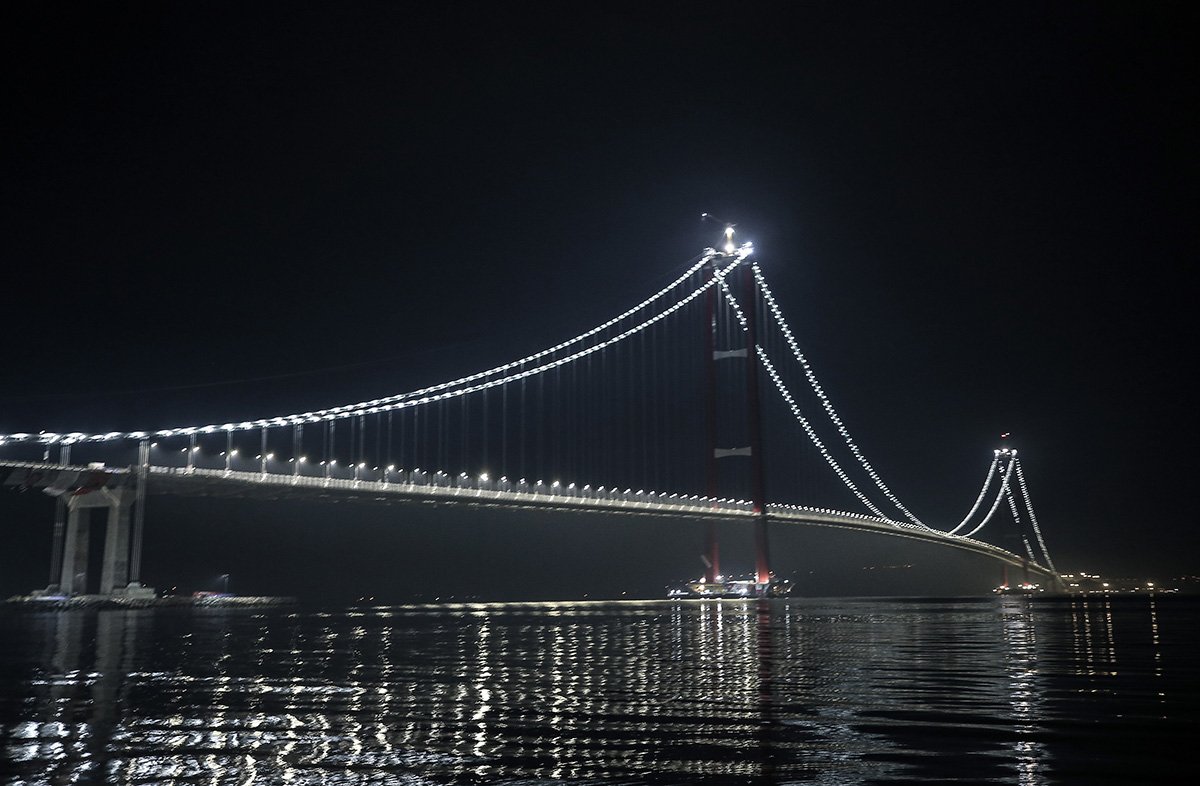 WHAT IS CONSTRUCTION AND OPERATION TRANSFER?

Limak Holding, one of the contractors of the project, is known as one of the 5 companies with the highest number of state tenders in Turkey. The name of this company is often associated with companies such as Cengiz, Kalyon and Kolin. The build-operate-transfer model is emphasized in the tenders that these construction companies receive from the government.

In the Build-Operate-Transfer (BOT) model, it is envisaged that a public infrastructure investment or service is financed by a private company. In this model, the company, which assumes the cost of the investment, also ensures the operation of the project, for which it assumes the cost, within a period determined by the public.

After President Erdoğan’s statement at the opening of the Çanakkale Bridge that “build-operate-transfer model projects will continue”, late Welfare Party Chairman Necmettin Erbakan’s criticisms of the model have become the order of the day on social networks.

The company sells the service it produces during this period to public establishments according to a rate set by mutual agreement by the parties. At the end of the determined period, the company transfers the facilities it operates to the public establishment concerned in a complete and functional manner.

In this method, frequently used in investments made in Turkey in recent years, companies generally receive guarantees of use in their contracts with the government. For example, companies undertaking the construction of airports receive a passenger guarantee, while companies undertaking the construction of highways and bridges receive a passage guarantee. Moreover, if the tolls are high, the State pays the rest of the guaranteed toll to the companies.

THE GOVERNMENT pays out billions of dollars every year

teacher. Dr. According to Uğur EmekThe guaranteed payment for the Osmangazi Bridge is 688 TL for 2022. However, since no passenger can reach this high figure, the bridge toll determined by the state is currently 184.5 TL. The difference of 503.5 TL is covered by the Treasury.

Erdogan will announce the price of the 1915 Çanakkale Bridge, which will be put into operation today, with a speech he will deliver at 4:00 p.m. If the bridge fee is less than 17.7 euros, which is the guarantee, the fee will be collected from the Treasury. On top of that, 45,000 vehicles have to cross the bridge daily so that the Treasury does not suffer losses. However, it is not known if this figure will be reached.

The Treasury suffers millions of dollars in losses each year due to high pass guarantees on many bridges and highways. For example, according to the guarantees given, more than 120 million vehicles had to cross the Eurasia tunnel in 5 years between 2017 and 2021.

However, according to information given by Minister Karaismailoğlu, the number of crossings remained at only 79 million. In other words, only 65% ​​of the passage guarantee objective has been achieved. The royalties for vehicles that were guaranteed but not passed were paid to the companies from the coffers of the Treasury.