Last minute… President Recep Tayyip Erdoğan said that following the talks in Uzbekistan, they have raised the relations between the two countries to the level of a comprehensive strategic partnership, “Our trade volume has exceeded 3.6 billion with an increase of nearly 72 percent over last year. The goal for one year as soon as possible. “We have set a new goal, we say, ‘We will reach the goal of 5 billion dollars. ‘ mentioned.

President Erdoğan held a joint press conference with President of Uzbekistan Şevket Mirziyoyev after the signing ceremony of the agreements in Kök Saray.

Expressing that they are happy to visit their ancestral homeland again after 4 years, Erdoğan thanked Mirziyoyev for his sincere hospitality and welcome.

Congratulating the Nevruz festival, which was celebrated last week, Erdoğan wished Ramadan, which will be held on Saturday, to bring mercy, abundance and peace to countries, the Turkish world and the Islamic world.

Noting that this year, as Turkey-Uzbekistan, they celebrated the 30th anniversary of the establishment of diplomatic relations, Erdogan said:

“It is also important for us to visit Uzbekistan in a year that is of great importance to our countries. The progress made by Uzbekistan under the able leadership of my dear brother Mirziyoyev is admirable. wholeheartedly the reform process initiated with the slogan of “Uzbekistan defeated” As you know, Turkey, Uzbekistan It is the first country to recognize the independence of Uzbekistan and to open an embassy in Uzbekistan.Turkey is also the first country to open a Consulate General in Uzbekistan.Our Consulate General in Samarkand has been serving our Uzbek brothers and citizens for a year.The basis of our relationship is our history, our language, our beliefs and our very strong common cultural ties. So much so that a century ago, when our nation was waging the war of independence with its men and women from Anatolia, our Uzbek brothers prayed for us and wrote poems here. are heroic. He saluted: “Hey İnönü, hey Sakarya, hey Soldiers of Independence / Advance without stopping until the National Pact is taken. Yes, we are striving to further improve our relations with Uzbekistan, with which we maintain such strong and sincere bonds of brotherhood, in all areas.”

“WE WILL GO UP TO 10 BILLION DOLLARS”

Expressing that they see the second meeting of the High-Level Strategic Cooperation Council, which they have just completed successfully, as another step in their journey from past to past, President Erdoğan said: “Following our meetings, we have raised the relations between our countries to the level of a comprehensive strategic partnership. Our trading volume increased by almost 72% last year. “We’ve set ourselves a one-year goal as soon as possible, we’re saying, ‘We’ll hit the $5 billion goal.’ he said.

Expressing that they want to follow all these steps closely by holding this meeting once a year, and not every two years, President Erdoğan said: “I think we will move faster towards our goals thanks to the trade agreement preferential agreement signed today, and 10 agreements have been signed. today. This means the signing of 10 agreements. This process between Turkey and Uzbekistan will progress much more strongly. mentioned.

Stating that Turkish companies’ investments in Uzbekistan have reached $1.5 billion, Erdoğan said that the contracting companies have so far carried out 241 projects worth $5 billion in Uzbekistan. 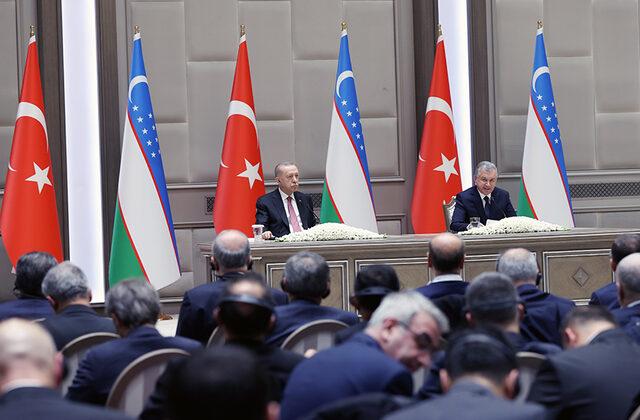 Expressing that Turkish companies are ready to contribute to the achievement of Uzbekistan’s development strategies for 2022-2026, Erdogan said: “I would like to thank the President once again for the confidence he has in our investors, on my behalf and on behalf of my nation. ” mentioned.

Stressing that cooperation in the field of tourism is growing, Erdoğan said:

“Last year we broke a record and welcomed more than 270,000 Uzbek brothers to Turkey. There is scope to increase this target to 500,000. Our destinations are strong, with mutual incentives, I believe we can achieve advanced goals in package tourism. Another area where we have great potential is undoubtedly the defense industry. In fact, we signed our signatures in the defense industry today, and with these signatures, we are ready to share our opportunities in the defense industry with your opportunities. The successes that Turkey has achieved in this field are evident. We agree to further develop our cooperation in a wide range of fields, from transport to energy, from health to education and culture. In particular, “We mutually attach great importance to the establishment of the Turkish-Uzbek University, together with my brother. In fact, we named our concerned friends. Tomorrow they will see the current university building and we will take the measurements quickly.

President Erdoğan said they are determined to continue supporting development in Uzbekistan through TIKA, whose projects are approaching $50 million.

Stressing that the joint statement they signed with the President of Uzbekistan, Şevket Mirziyoyev, will be a roadmap in the future, Erdoğan said: “Today we have also confirmed our willingness to maintain our solidarity in international platforms, especially our Organization of Turkish States. , and our close contact on regional issues. The sources are the same,” he said.

Explaining that they assessed the issues and developments that occupy the agenda of the region and the world, Erdoğan continued his remarks as follows:

President Erdoğan thanked the warm hospitality extended to him and the accompanying delegation and said: “In the presence of Mr. Mirziyoyev, I would like to thank the people and authorities of Uzbekistan. mentioned. 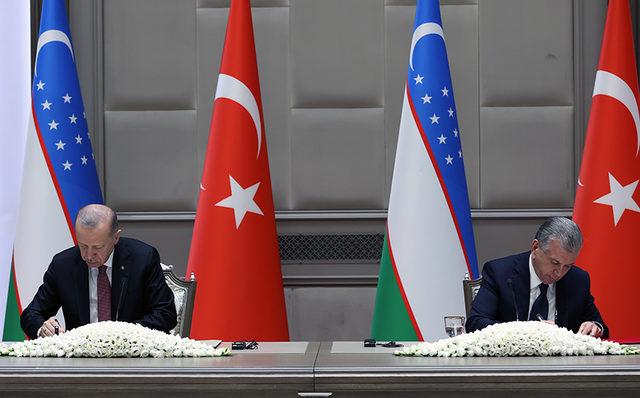 10 AGREEMENTS SIGNED BETWEEN TURKEY AND UZBEKISTAN

President Erdoğan and President of Uzbekistan Mirziyoyev had a one-on-one and after the High-Level Strategic Cooperation Council meeting in Kök Saray, a signing ceremony was held.

The “Joint Statement on the Results of the 2nd Meeting of the Turkey-Uzbekistan High Level Strategic Cooperation Council” was signed by President Erdogan and Uzbek President Mirziyoyev.

Minister Koca announced: It will be produced in Turkey

Terrible torture! “They wanted me to go naked”

“Erdogan’s vote increased by 2%,” he said, announcing the alliance