There is an economic model on which all political systems are based. The most fundamental dividing point between these political systems is how the economy will be run. Although the economic model of traditional social democracy, stemming from two major ideologies (Marxism and liberalism), is generally based on Keynesian economics, it is clear that we need a new economic model of social democracy based on a human-centered development ethic where we are today. For this reason, the economic policies of social democracy can no longer consist of Keynesian propositions that prioritize overcoming recessions such as “they can dig a hole if necessary”. Social democracy adopts “conscience”-based interventions, which are not central to the established economy and are more specific to the left, as a sine qua non of its policies and considers it one of its main pillars. For this reason, it has been demanded by social democracy as a duty to present institutionalized solidarity mechanisms to the world and to support all excluded groups (even if they sometimes lose votes).

In our country, those who defend social democracy bear the same responsibility. Therefore, it should approach every issue on the basis of rights and establish decision-making processes that do not exclude conscience. For example; Although people’s language, religion, ethnicity and skin color are different, for us these differences are only considered wealth outside of right-wing politics. Moreover, for us, these differences are not those that we “tolerate”, but those that we advocate living. Again, all the distinctions for right-wing politics can differentiate their approaches to these groups. There are many examples of this in political history. But this was not the case with social democracy. Because the main division in us is about class and freedoms.

When we look at Turkey today, although ideological or party/leader support comes to the fore, in my opinion the main separation is between the poor and the rest. Again, if we look at the issue from the point of view of social democracy, the poor for us are simply poor, regardless of the party, ethnicity, language or religion they vote for. It is in the nature of social democracy to see the poverty of a poor believer and the poverty of a poor unbeliever as an equal problem.

As with everything these days, dividing bread won’t be as easy as it used to be. Society entered this month of Ramadan impoverished as never before. The bread on his table does not grow as much as the sense of solidarity that grows in him. On the contrary, it decreases. We tried to understand the impact of the economic crisis on iftar tables at the moment. That’s why we’ve added specific questions to our research this week. Let’s examine the results together;

First, we tried to figure out how many households had iftar tables. For this, “Is there an iftar table set in your house during Ramadan?” we asked. Their answers are as follows.

As you can see, setting up an iftar table is a common culture that underpins all parties. Afterwards, we tried to understand if there was a difficult situation compared to last year in terms of the iftar tables to be set up this year, and if there is, we tried to understand its magnitude. For this too “How easily can you economically prepare the table for last year’s iftar this year?” we asked. When we look at the responses, we see that the picture is even worse than we thought. Let’s examine together. 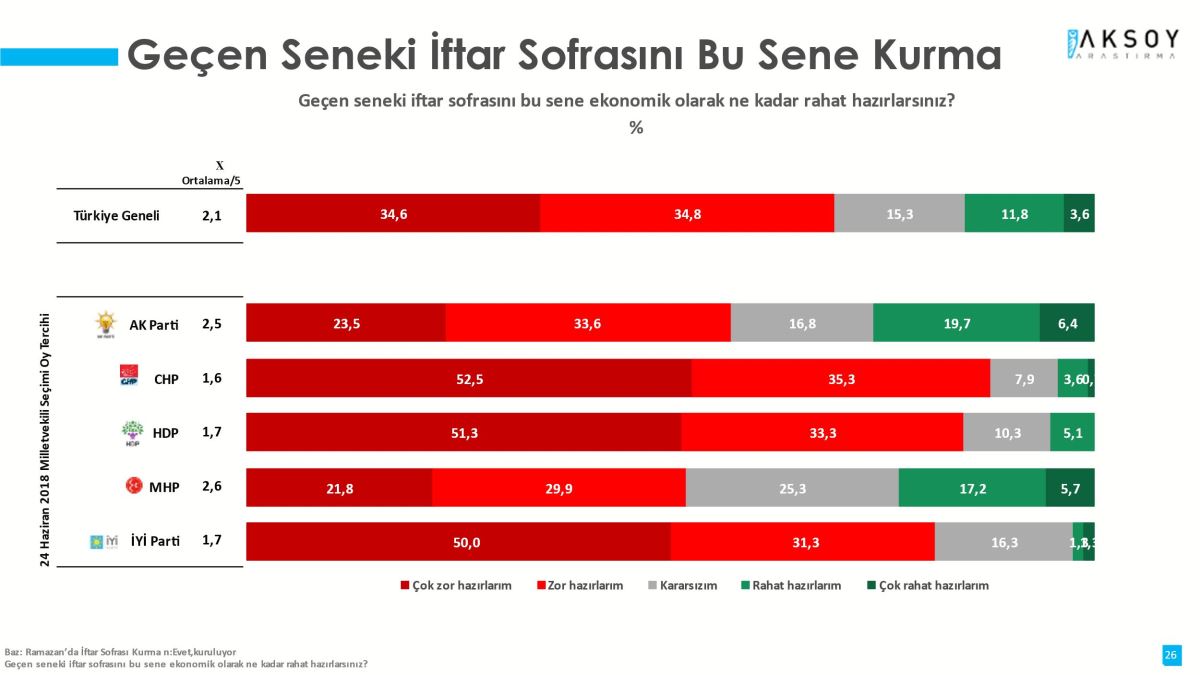 Only 15.4% of those who set an iftar table think they can set the same table without difficulty. Now, let’s examine together the reason for this difficulty based on official figures. First, in the research, we measured what citizens have at their iftar tables. The foods that stand out at the iftar table are as follows. 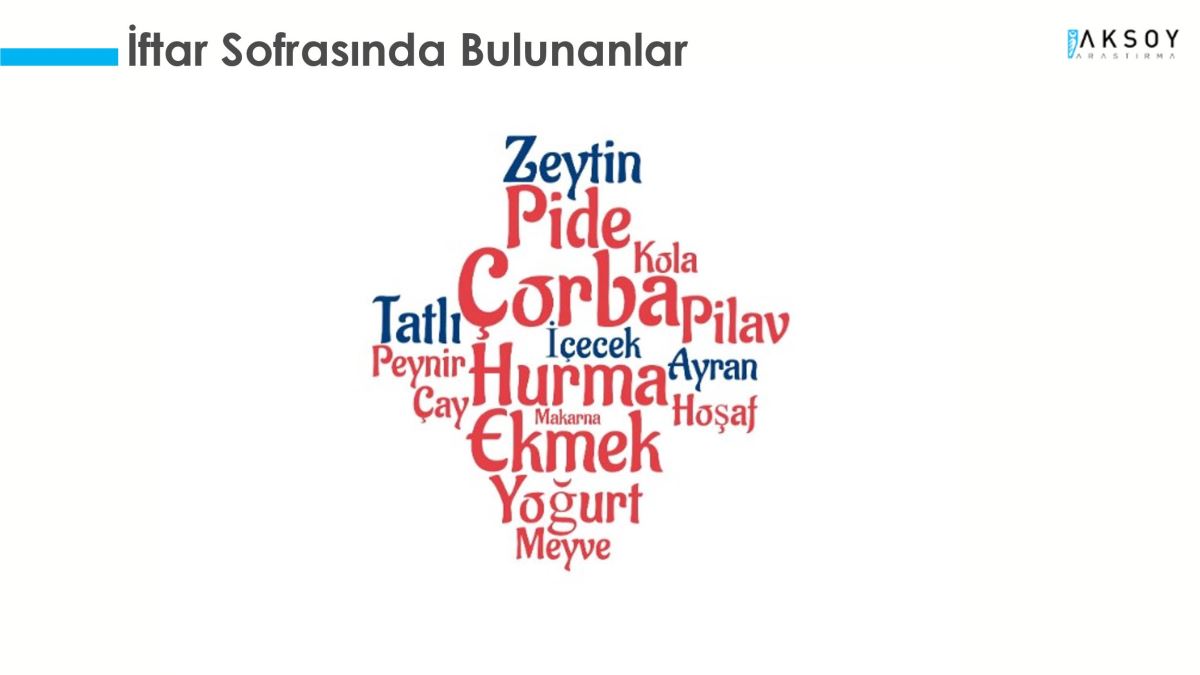 Each word in the word cloud above is larger or smaller depending on its statement. We understand that among many consumer products, the most important are food products such as soup, dates, bread, pita bread, olives and yogurt. Products with low mention frequency are not included in the word cloud so as not to spoil the visual. Now let’s look at the price changes of these foods at the iftar tables, based on TUIK data. As you can see, iftar tables will be much more expensive this year compared to last year. The company will have to buy olives 42%, yogurt 51%, chicken 78%, pasta 89% and potatoes 152% more expensive among the products on the table. In short, he will find it difficult to fulfill the requirements of his faith.

While the situation of the citizens was like this, an advice came from Erdogan on what we should eat this week. Many opinion makers, especially on social networks, shared their objections to the cost of the recommended mixture. We wanted to understand the citizens’ point of view on the subject and we watched the video of this statement.

After watching the statement, we asked, “How much did you like this statement by the President, Mr. Recep Tayyip Erdoğan? The answers are as follows. 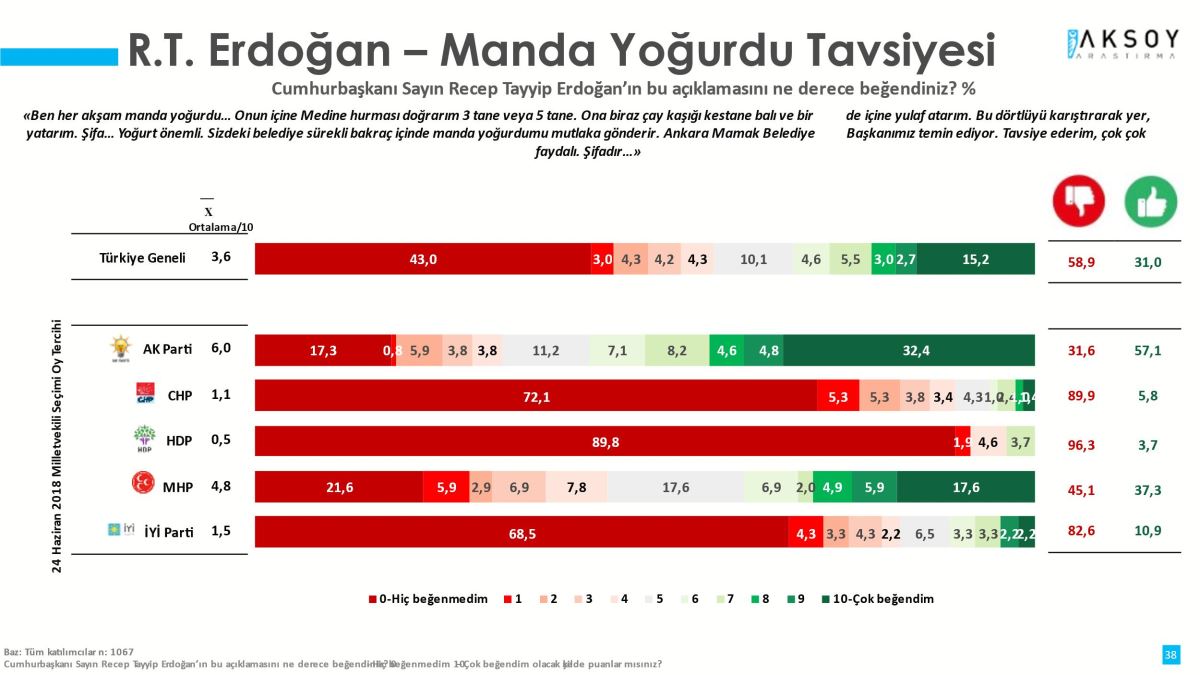 The rate of those who say they like the statement is a minority even in the MHP database. We confirm once again that the advice given to a company which buys potatoes 152% more expensive than last year, on water buffalo yoghurt, medina date and chestnut honey, does not found no response.

Government policies, disconnected from reality, create more and more impoverishment. Even the country’s skilled professionals have to work for wages below the poverty line. Against all these negativities, there is no attitude other than the arrogant speeches held by shouting more from the side of the government and its junior partner. This increasingly extreme right-wing government is making society pay more. It seems that society imposes a political cost on them as well. According to the results of our research this week, the distribution of party votes once again shows how society reflects the cost paid. 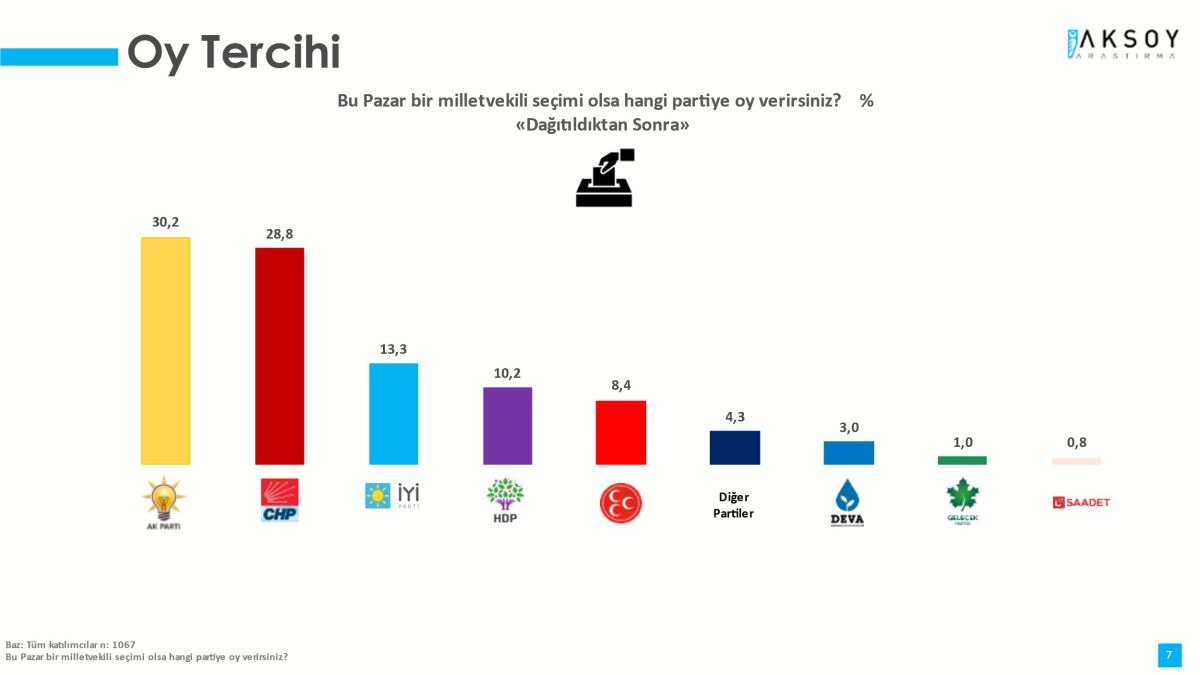 As you can see, the extremism that the government is increasing every week does not add to it, but takes it away. From this point of view, I would like to emphasize once again that we must stubbornly and persistently defend what is reasonable against extremism. Our task is to unite more against their segregation. Our duty is to fight hard for the bread of the poor at the iftar table, no matter which party they vote for. Because social democratic understanding of human-centered development tells us that it should be so.