Turkey’s largest research firm, Ipsos, released its anti-crisis report with 800 people. In light of the data published in the report, Turkey’s most important problem was determined to be the economy, and 9 out of 10 people said that VAT cuts did not provide an adequate solution to high prices. . It is remarkable that for the first time in the history of the Republic, 90% of those questioned considered the economic crisis as the biggest problem.

In its anti-crisis report, Ipsos said; To deal with price increases, government policies assessed producers and consumers from their own perspective. In the report, individuals were asked questions such as the reflection of measurements on the label, the state of economic aid, the level of increase in household income and what is the most important problem in Turkey.

As a result of the data from the report, it was determined that Turkey’s most important problem was the economy. It is remarkable that for the first time in the history of the Republic, 90% of those questioned considered the economic crisis as the biggest problem.

In the light of the data obtained in the report, the opinion that the reduction of VAT on certain basic consumer products was not reflected in the prices practiced on the market was dominant. 9 out of 10 people said that VAT reductions did not provide an adequate solution to high market prices.

The rate of those who think that the reduction of the VAT rate from 18% to 8% on certain products such as cleaning products, shampoo, toilet paper, baby diapers and sanitary napkins does not affect market price was determined at 81%. 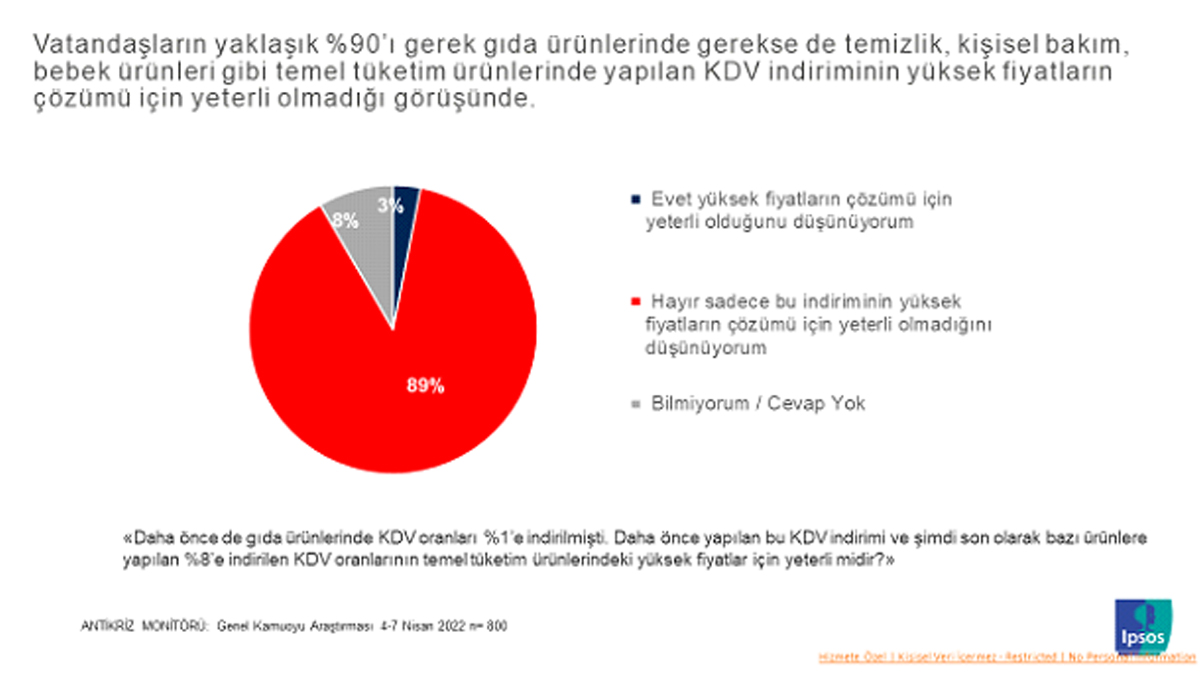 THE HOUSEHOLD INCOME OF EVERY 10 PEOPLE HAS DECLINED 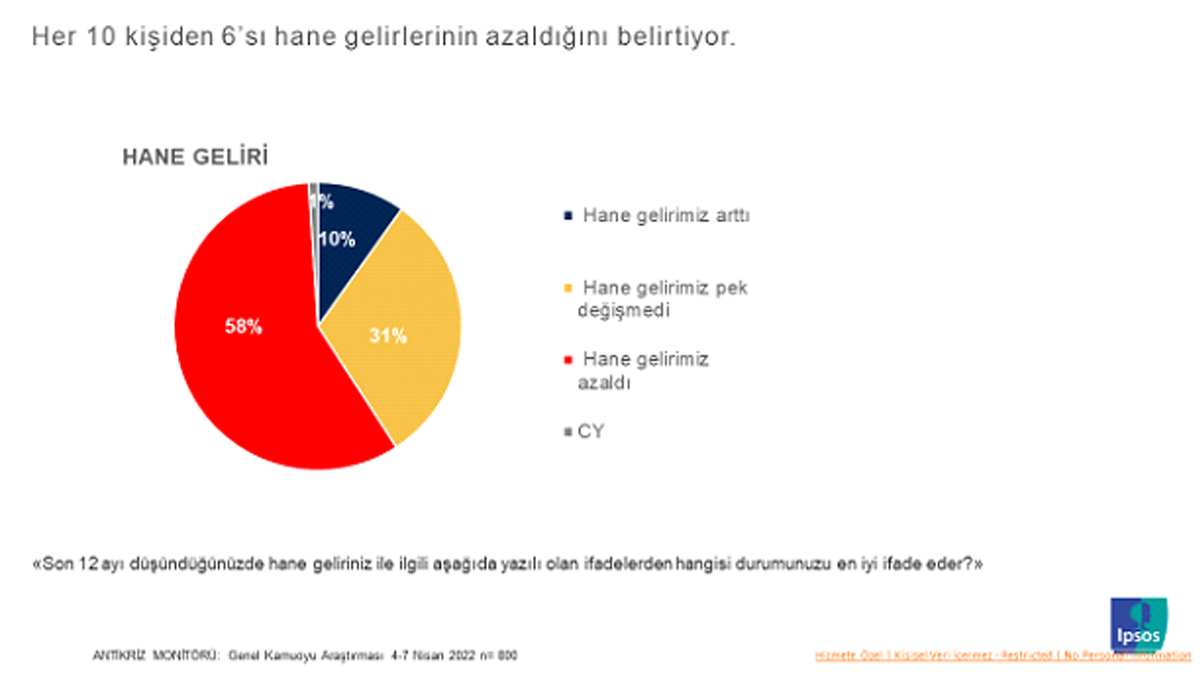 Following the data released in the report, it was determined that the Covid-19 outbreak and economic issues have also affected the mood of society. It has been determined that individuals feel more tired and bored, especially with increasing economic problems. The feeling of fatigue reached 60% for the first time. 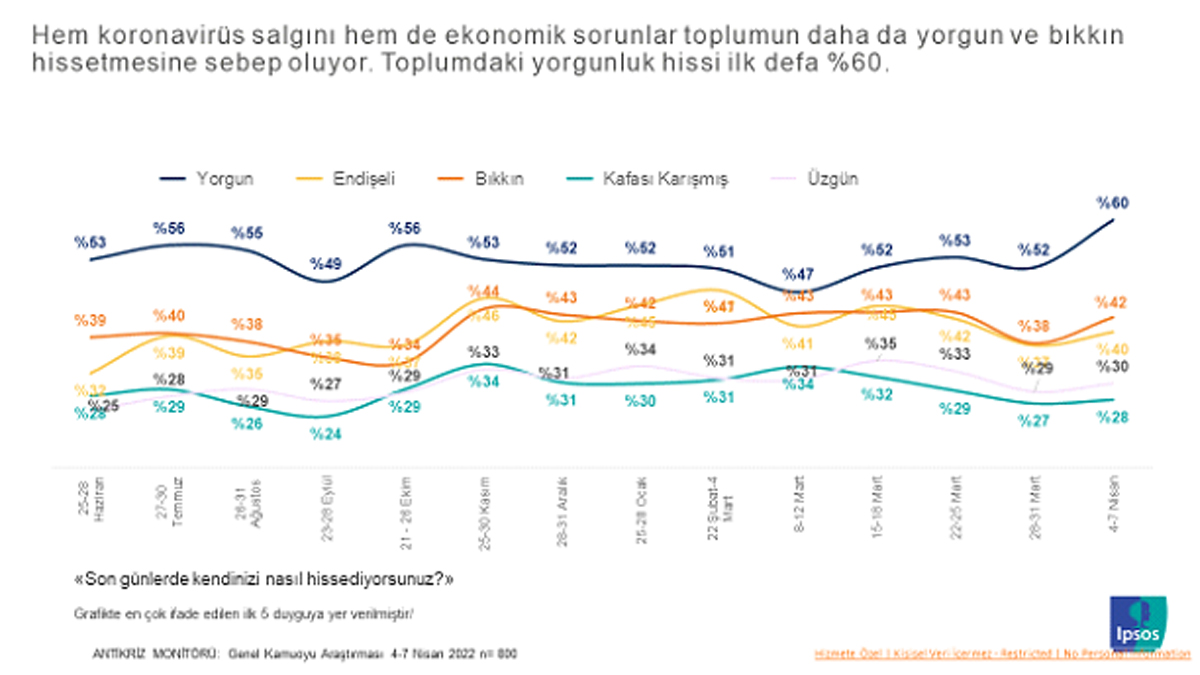 In the report, 91% of society say Turkey’s most important problem is the economy. It was noted that with the decreasing effect of the epidemic, it is no longer seen as a significant problem in society. 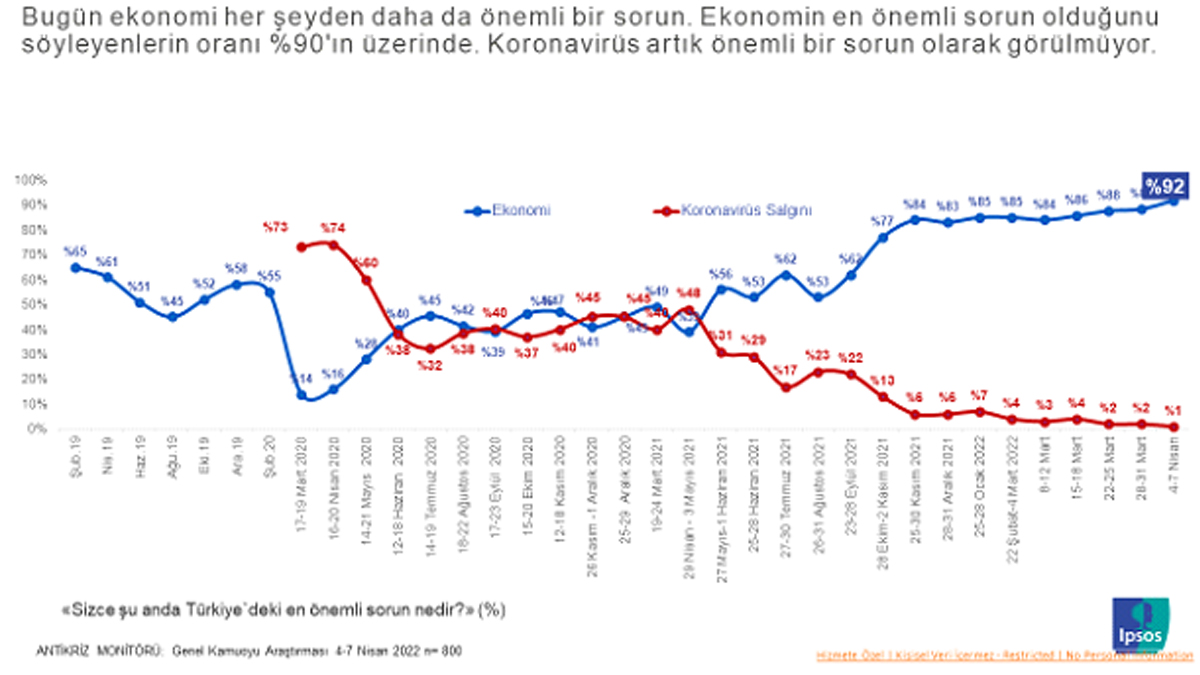 “OVER THE PAST 2 YEARS, WE HAVE BEEN VERY TIRED FIGHTING THE EPIDEMIC AND THE ECONOMY”

Sidar Gedik, CEO of Ipsos Turkey, said the following after the data obtained:

“For about a year, the economy stood out as our country’s most important issue. With the effect of the epidemic waning in recent months, the economy has come to a position where all other problems are removed. As inflation continues to rise, six out of ten people say their household’s purchasing power has declined over the past year. Naturally, when we ask what is our country’s biggest problem, almost no other problem comes to mind. In order to cope with price increases, the government, producers and consumers take various measures on their side.

Among the measures taken by the government, there are also reductions in VAT. Yet eight out of ten citizens do not believe that these discounts are reflected on the labels. And nine out of ten believe that the VAT cuts will not be enough to fight against the rise in prices. In other words, some of us say that even if the discounts are reflected on the label, it won’t be enough. In the past 2 years, we have been really tired in the fight against the epidemic and the economy. ”