After the sale, businessman Mehmet Baharoğlu, who has a lease contract, was asked to leave the factory by the new and old owners of the factory. The plant operator, who said he had made significant investments during the establishment of the plant and that the period of the lease contract continues, refused the request for evacuation. It has been claimed that the owners of the factory, who took action after the tenant businessman refused to evacuate the factory, cut off the electricity to the business.

WORKERS MAY BE UNEMPLOYED

Tenant businessman Mehmet Baharoğlu, who claimed the factory owners cut off the company’s electricity because he refused the request to evacuate the factory, said he employed about 250 workers and that they had tried to produce under difficult conditions with generators after the power cut. cut. Saying that they cannot produce in this way for a long time, the businessman said that if the process is prolonged, they should lay off the workers and asked the authorities for support in this matter.

“OUR ELECTRICITY FALLS WHEN WE HAVE NOT DISCHARGED”

Giving statements on the events, tenant businessman Mehmet Baharoğlu said, “We produce blankets here and currently employ between 200 and 250 people. It’s been about 15 months since I started working in this factory. The owner sold the property and asked us to leave after selling it. We spoke with the President of the Organized Industrial Zone, he would give us a place. We were going to do it quickly and evacuate the factory within a year and deliver it. The person who took the place said that my machines came and I had to unload it like March urgently. We have said that we will not be able to travel during this period. Then they came and cut off the electricity three or four times. We said that was not true and asked for electricity. They waited three months. After three months, they said they couldn’t provide electricity. They said we don’t consider the contract between you valid because the previous owner sold his property. They said you had to make a contract with the new owner. Making a contract with the new owner means that we evacuate the factory the same day. They cut off our electricity, water and natural gas. We are currently working with the generator. We produce 2,000 covers per day. Our products go directly to export. After the power cut, we reduced our production capacity to 50%. We can only work during the day. We believe that our electricity will be restored. It is our constitutional right. We don’t owe a single lira bill. We have given the necessary guarantees. If additional safeguards are required, we will provide these as well. We want our electricity. We don’t want to lay off our workers, or reduce our production,” he said. 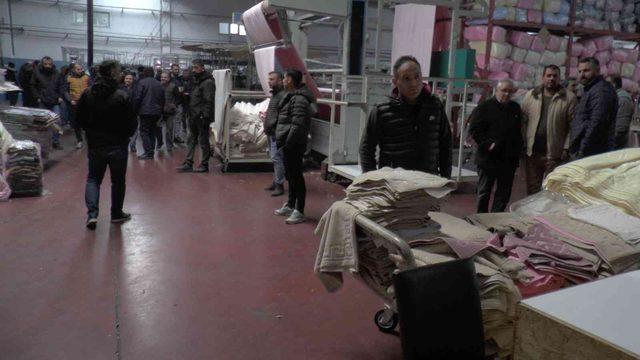 WORKERS DON’T WANT TO BE UNEMPLOYED

Barrister Ayhan Uygur, who briefed on the process, said: “When we received a letter to cut off our energy, we filed a complaint with the Commercial Court of First Instance. Our case is still ongoing. The Muaraza Sperm Affair. In this process, we made a precautionary decision to provide electricity. Because our company has no debts. We have a 213 thousand lira guarantee inside. We have a letter of guarantee, and while the country’s export revenue is so badly needed, workers and employers are satisfied here and want to produce, but our electricity is arbitrarily cut off by the management. We won’t have electricity during the trial. How long can the factory support the production with the generator. We could not understand what harm was doing us, legally or de facto, by giving us electricity. 250 workers working here means that around 1,500 to 2,000 people eat bread. A contract with the new owner is requested, but the new owner does not come close. However, even now, our factory’s signed contract is six months old. We have an official contract,” he said.
The factory workers, who reacted to the events with applause, demanded that the company receive electricity as soon as possible and stressed that they did not want to be unemployed.

Where can I see the results of MSU preferences?

Strong reaction from Turkey to the USA!

Call for help from ATT Kübra! “I don’t have much time”