Breaking news: passenger buses crashed in Istanbul and Tokat. While it was reported that 3 people lost their lives and 17 passengers were injured, 9 of them seriously, in the accident on the Northern Marmara highway in Istanbul, 1 person died and many people were injured. were injured in the Tokat accident.

The accident happened around 08:30 in Beykoz Northern Marmara Highway Reşadiye Mevkii. The intercity passenger bus, which was traveling from Tekirdağ to Antalya and containing 22 people, including staff, went out of control and rolled into a palisade as it proceeded to board passengers from Dudullu. Upon notification, numerous fire, health and police teams were dispatched to the scene. The teams who arrived on the spot in a short time evacuated the passengers trapped in the bus. While the driver and 2 passengers died in the accident, 17 passengers were injured, 9 of them seriously.

The injured were transported to surrounding hospitals by ambulances from the scene. On the other hand, the bus was lifted with the crane sent to the North Marmara highway and it was checked whether there were passengers under the vehicle. AFAD teams who came to the region also took part in the search. Northern Marmara Highway traffic crews took safety measures to prevent a second crash in the area. Mustafa Şaşmaz, deputy provincial police chief, who visited the scene, also examined the area. While the citizens who lost their lives were taken to the hospital morgue, the teams’ investigations are continuing. 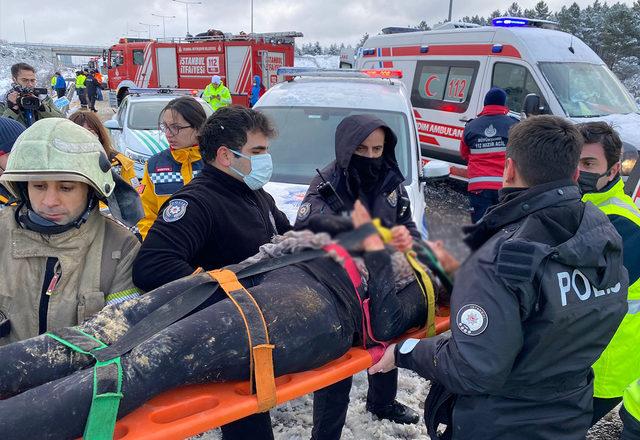 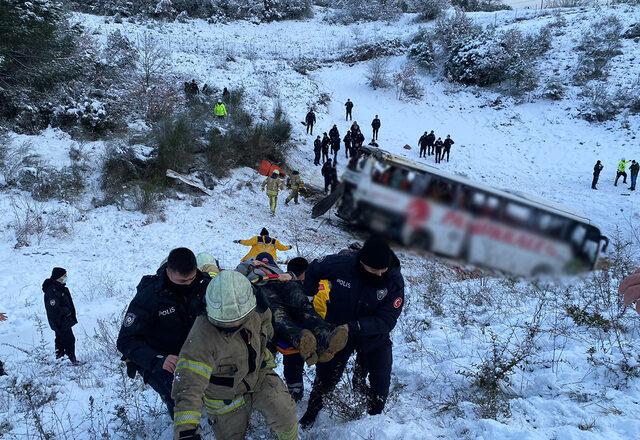 “I WAKE UP SPEED IT WAS GOING SO FAST”

A passenger, who gave a statement about the accident in which he was injured, said he took the bus from Esenler to Bursa and said: “I was sleeping. I opened my eyes instantly. I’m already awake. It was going very fast. Then all of a sudden it started slipping, then we did somersaults. “There were 2 kids and 1 wife sitting in my back seat,” he said. 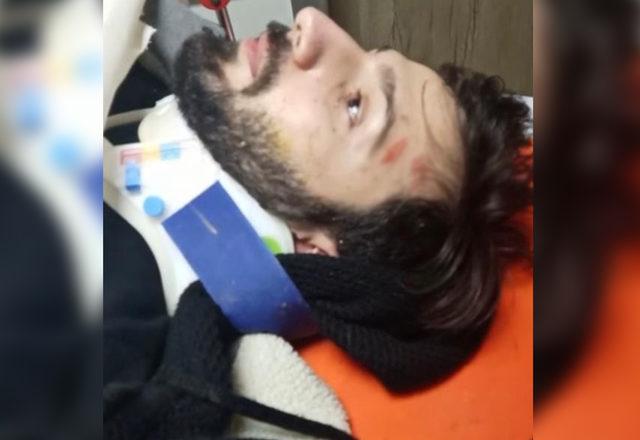 It turned out that 2 people who lost their lives in the accident in Istanbul worked as teachers in the Çerkezköy and Saray districts of Tekirdağ. It was stated that Cafer İzmirli, who lost his life in the accident, is a science and technology teacher at Martyr Erdem Uçar Secondary School in Çerkezköy district, and Uğur Göknel worked at November 1 Primary School. of Büyükyoncalı in Saray district. 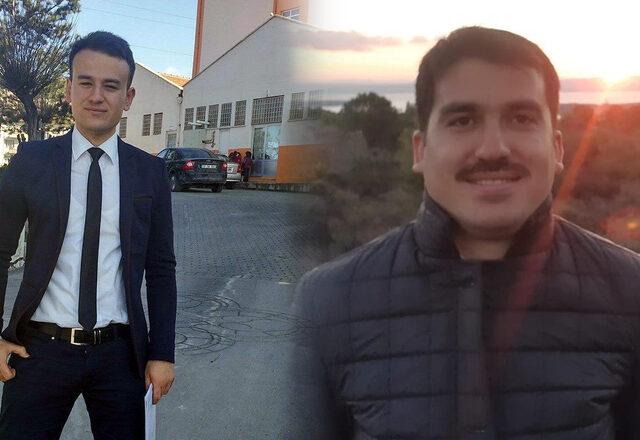 Çerkezköy National Education Director Hüseyin Gümüş posted a condolence message on his social media account. Stating that teacher Cafer İzmirli, who works in the district, went to see his family in Afyonkarahisar due to the temporary vacation, Gümüş said, “We are very sorry. We are in deep sadness to lose our teacher Cafer İzmirli. As a result, we lost our colleague.Our teacher of information technology from Martyr Erdem Uçar secondary school was traveling to his family in Afyon.He was working in the field of IT at the Center for Science and Arts in Çerkezköy. He was on the Pamukkale Travel bus departing from Çerkezköy this morning. He had our last workshop lesson yesterday. Have mercy on our colleague, to his loved ones, “I would like to express my condolences to his family and our community educational. Death is not far from us, death is near to us,” he said.

According to the information obtained, the accident occurred in the morning near the village of Çalkaya, on the D-100 road in the district of Erbaa. The passengers, who were pulled from the bus with the help of passers-by, struggled due to snowfall and cold weather. Some slightly injured passengers were taken to the vehicles of the rescue teams. The body of Bahtisen Sibirli (39) who lost his life after being knocked down by the bus in the accident was evacuated by teams from the municipality of Erbaa. 38 injured were transferred to hospitals in Erbaa district in Tokat and Taşova district in Amasya. 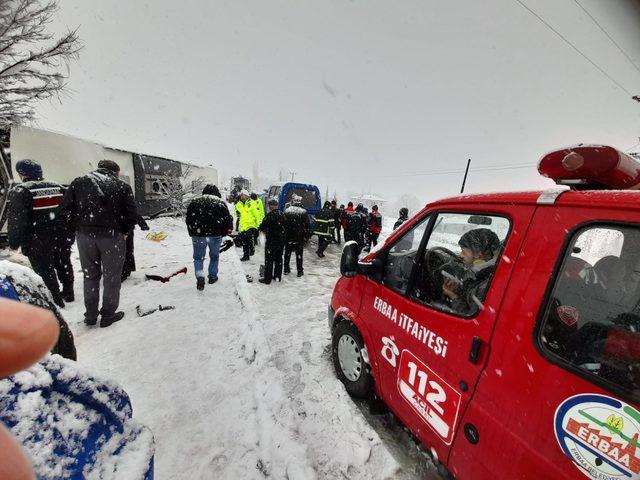 While the injured described their moments of fear, the police and the gendarmerie opened an investigation into the accident. 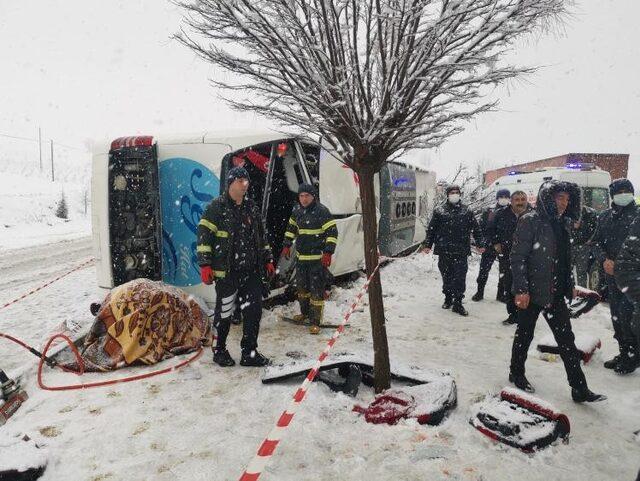 On the other hand, the passenger bus under the management of Emrah K., going from Adıyaman to Giresun in the morning, went out of control on the snowy road around the central DSI junction of Amasya. There was material damage on the bus, which was able to stop by hitting the traffic sign. A large number of police, firefighters and 112 rescue teams were dispatched to the scene.

Of the 35 passengers on the bus, 12 injured were taken to a nearby hospital by ambulances and fire engines, and were treated. An investigation into the accident has been opened. 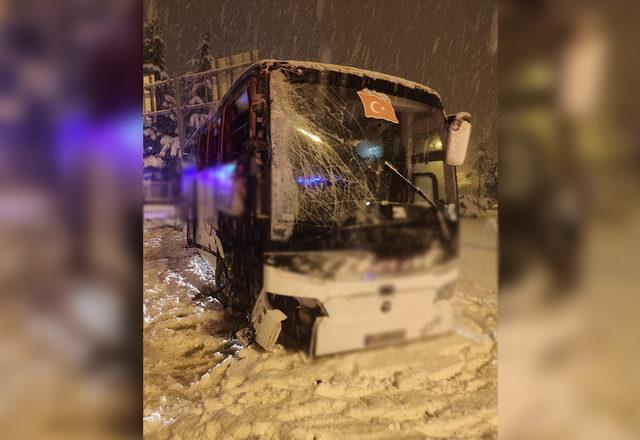 Look what Imamoglu did after those words!

The claim that “two names from the MHP will be ministers”