Speaking at his party’s membership participation ceremony in Istanbul, CHP leader Kılıçdaroğlu said, “I promised this nation that I will not do identity politics. Everybody’s faith is on my head. Almighty God knows who is faithful and who is not. “I have to respect, I will respect,” he said. Kılıçdaroğlu, arguing that the headscarf has been Turkey’s “number one problem” for some time, said: “What’s wrong with you, brother? There is bread in this house, is there unemployed, you will solve it first,” he said. Citizens who quit the AKP joined the CHP during the membership participation ceremony.

Addressing residents of Sultanbey, Kılıçdaroğlu said, “A friend of mine talked about castles while he was talking. “Sultanbeyli is the stronghold of the AKP party,” he said. If you want to define a place as a fortress, every factory is a fortress. Every factory should be a fortress for nice people to work there,” he said.

Kılıçdaroğlu, using the expressions “I know we are very divided”, said that politics is made on ethnic identity, beliefs and way of life, and said: “I promised this nation, I I will not engage in identity politics. Everyone’s faith is on my head. Almighty God knows who is a believer and who is an unbeliever. I must respect, I will respect. There is also our fault. Headscarf used to be the number one problem in Turkey. What’s wrong with you brother, you don’t mind. Bread in this house, are there unemployed people, you resolve first We must embrace Sultanbeyli and heal old wounds.

Kılıçdaroğlu continued his remarks as follows:

“I know Sultanbeyli. I spent 12 years in Istanbul. I have three children, all born in Istanbul. I am no stranger to Istanbul. I am aware that Sultanbeyli is a difficult area for CHP. I came here often, but there was a wall between us, this wall had to be torn down. We have not worked hard enough to reach citizens. We didn’t sit at their tables, we didn’t drink their coffee or tea.

I want all my brothers in Sultanbeyli to be sure. A new process has started in Turkey. We don’t need to fight. We need to say goodbye and kiss to live together. Are there any shortcomings, but let’s leave them aside. The country has many problems. There is one unemployed person in each household.

God willing, with your vote, we will set up family support insurance when we come to power. No family income will be less than the minimum wage. Turkey pledged to enact this law in 1971. But they are not doing it.”

“Young people will determine the fate of the election”

“Our brothers come among us. You will see a very beautiful picture. Whether he votes for us or not, if there is a problem somewhere, we spend effort and want to solve these problems. Our young friends also join us. Young people will determine the fate of the next elections. If you want justice, democracy or criticism then you will vote for the CHP.

We don’t hold grudges. We don’t inject anger into our own souls. We want to build everything on love, brotherhood, friendship, human rules, love. Respect for everyone is our main duty. Politics should tell you the truth. If the political institution does not account for the tax you pay, it means the money is going to someone else. I’m going to cut off all the money that was siphoned off from these people. I will give all these tips to this nation. 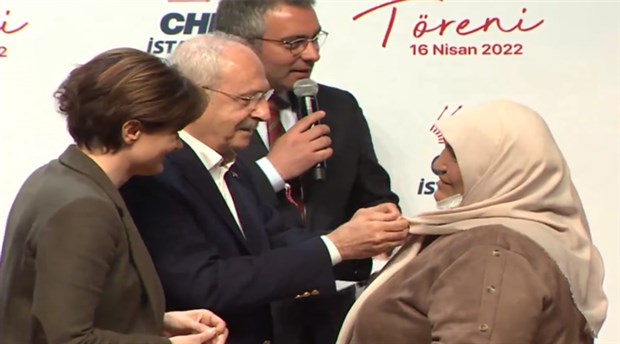 After Kılıçdaroğlu’s speech, the new members received badges. CHP Vice President Oğuz Kaan Salıcı, CHP Group Vice President Engin Altay, Istanbul Metropolitan Municipality Mayor Ekrem İmamoğlu, CHP Istanbul Provincial President Canan Kaftancıoğlu and many others during the ceremony where the CHP insignia was brought to 400 people who were members of the AKP or MHP or could not be members of any political party in the past. A large number of party members were also present.

Housewife Ayşe Arayan: “I was in the AK party, since I did not receive any service from there, I go to the CHP. I went to school one day, a person I didn’t know said to me, ‘We have an event, do you want to come?’ He said, ‘Can I take him to the hospital? They took care of me, Mr. Ozgur and Mrs. Sibel. I saw them with family. From now on I am CHP. They took care of me even though I never knew them. I know them like family. I leave my AK Party card here.”

Lawyer Ceylan Mercan: “I would like to thank the Great Leader Mustafa Kemal Atatürk, whose principles I owe my ability to speak as a woman lawyer upright. As a young lawyer, I am aware that one of the biggest fights of the CHP is to ensure the rule of law. Under the leadership of Kemal Kılıçdaroğlu, we will crown this just struggle and our march for justice with victory. straight; As someone who was not a member of a political party before, I join the CHP to end this black order in which those who hold the government are shaped and destroyed according to their will, the justice system is abolished, the rights to a fair trial and freedom of expression are violated. Under the leadership of our President, we will put an end to this black order at the ballot box. 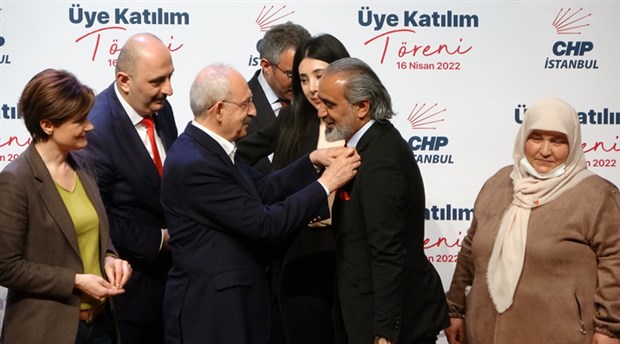 Businessman Bülent Kurt: “I am 47 years old. This is the first time that I am a member of a political party. Recently, I became a member of the CHP to do politics because I came to the conclusion that “the alliance of six” saves the future of Turkey. In the next process, I always become a member to serve in the CHP with me and my friends. Everything will be fine, whoever happens.

Ayşenur Ulus, university student: “I come from Bitlis. I was not a member of any party before. I became a member of the CHP for the first time. Lift the headscarf ban in universities; As a young academic, I thank you for the democratic attitude of your party and your person.

Esra Erdag, university graduate worker: “Because I believe in the cause of rights and justice that you have started, I have decided to become a member of the CHP to build a brilliant Turkey, for a brilliant Turkey under the leadership of Mustafa Kemal Ataturk. I also believe and trust your sincerity regarding the examination system and interview. I came to add strength to our strength. By the way, I was a member of the AK party, I have just handed in my resignation and I have decided to be a member of the CHP.