Following changes to the electoral law, prepared jointly by the AK party and the MHP, the opposition intervened. As the possibilities of a third alliance began to be discussed at the 6-party opposition table, Kılıçdaroğlu’s statement that they had a study with 8 options mobilized the political backstage. The details of the study with 8 options, prepared according to the changes in the electoral law, have emerged.

According to news from Cumhuriyet newspaper; The opposition bloc, which believes that the changes to the electoral law were made to set a trap, is planning the measures to be taken against this initiative of the People’s Alliance.

As the fourth leaders’ summit, which will be hosted by Democratic Party Chairman Gültekin Uysal on April 4, approaches, the simulation and formula work of staff from six parties is largely complete. CHP President Kemal Kılıçdaroğlu, in the TV show he attended the night before, said his staff and academics were working on various scenarios and they would present the work with eight options at the table at 6. The details of the eight-option study presented to Kılıçdaroğlu by CHP staff have been reached.

HERE ARE THE OPTIONS

According to the information received, the “one candidate, eight options project” created by CHP staff and scholars is as follows:

a- Six opposition bloc parties will be included in the National Alliance structure, and elections will be held in all provinces with CHP or IYI party lists. In this formula, based on the status of the parties in the provinces, the priority to make a list will be given to the advantageous party in this province. The candidates of the DEVA, Democrat, Future and Saadet parties will be added to the lists which will be published by the CHP and the IYI Party.

2nd- The Nation Alliance framework will be preserved and the 4+2 option will be implemented. CHP and IYI Party form a bloc; The DEVA, Democrat, Future and Saadet parties will be the second block, the elections will be held with two separate lists.

3- The 3+3 system will be implemented within the framework of the Nation Alliance structure. While the CHP, the IYI Party and the Democratic Party form one bloc, the DEVA, Future and Saadet parties will take their place in the second bloc. Alliances will create two separate lists to choose from.

4- The National Alliance will keep its structure composed of the CHP and the IYI Party. Alternatively, a new alliance with a different name will be created. The new alliance will include the DEVA, Democrat, Future and Saadet parties. The two alliances will make different lists in the provinces.

5- The “mutual withdrawal system” will be implemented by examining the voting potential of all opposition bloc parties in the provinces. For example, in a province where it is believed that the CHP or the IYI party will not be able to elect MPs, it will create a list based on a possible party or block if it has more MPs. In this option, whichever party or bloc has the advantage, the priority of making the list will be left to them.

7- In the event that the AK party, the MHP and the BBP, which are in the Popular Alliance, organize elections with separate lists, the most advantageous option will be evaluated on the first six formulas.

8 – If the AK party, the MHP and the BBP stand for election with a single list under the aegis of the People’s Alliance, the first six formulas will be discussed and the option that offers the possibility of obtaining the most deputies will be privileged. 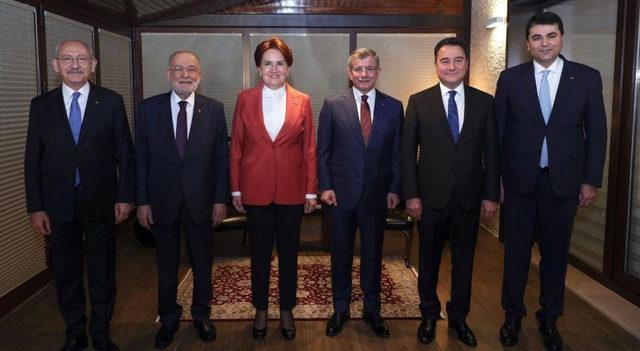 In addition to the options presented in the CHP study, attention is drawn to the fact that the most important factor is “to keep the number of deputies in the provinces high”. If it is expected that the best scenario for the National Alliance will be a “common list of 6”, it is estimated that “the number of deputies that an alliance of 6 can obtain can approach 300” and “the number of deputies of the People’s Alliance will remain at 240”. On the other hand, we note that in all the scenarios mentioned, the number of deputies to be appointed by the HDP will vary between 55 and 70”. In the local elections of 2019, with a similar practice in which “meticulousness and democratic abnegation” will be privileged, recalling the “withdrawal system according to the provinces” put in place by the CHP and the IYI party, “The Alliance Nation will be able to obtain a majority in the Grand National Assembly of Turkey in the elections of 2023”, “the only candidate to be drawn by lot by this union” It is emphasized that he can become the 13th President of the Republic of Turkey.

Ambitious departure of TDP leader Mustafa Sarıgül: if there are not 30,000 members, I will leave the presidency

“Both results were interesting,” he explained.

The President suggested to the Chief Advisor: For chronic fatigue…