(Murat TAN)-SPECIAL NEWS- While the determination case regarding the lands covering about 500 decares in Aydın in Köşk, İncirliova and Koçarlı has not yet been concluded, about 60 heirs sued the lands in Aydın. The lawsuit filed in the 5th and 9th Civil Peace Courts of Ankara for an inheritance certificate was concluded in favor of the heirs last year. As a result of the detailed determination in the case, the title information of 54 decares of land in Incirliova Erbeyli district, 13 decares of grassland in Incirliova Hacıaliobası district, 32 decares of olive trees in Koçarlı Kuşlarbeleni district and 20 decares of land in Köşk was reached, it was concluded that about 500 decares of land in 3 districts The way to return to heirs was also opened. Oğuz Ersöz, who has a share of the inheritance to be divided into about 60, and spoke about the case he was involved in after the death of his older brother in 2012, noted that they managed to overcome the process in Aydın, which was hampered by judicial and bureaucratic authorities only after years.

“THE MOST OF HERITAGE IS IN GREECE”
Oğuz Ersöz, who informed that his older brother, who died in 2012, knew about the inheritance with the notification received because a large sum of money was deposited in his account due to expropriation in Aydın, said in a statement regarding the lands subject to trial, “this matter dates back to very ancient years. Before my brother died in 2012, I got involved in the process and went in and out of business because he wanted me to handle the case. We currently have title to the land of 10,000 decares in Thessaloniki, Greece. It was inherited from an owner named Kara Hüseyin. We still have title deeds there. The owner becomes my great-grandfather. His name there was Bekir Ağa. Melike Hanım, my great-grandfather’s wife, went to Thessaloniki from Aydın as a wife. Melike Hanım’s brother, Hamdi Çengelci, owns about 500 acres of land in Aydın, as far as we can determine. As Bekir Ağa was a landlord, he sent the money he had given to his wife Melike Hanım to his brother Hamdi Çengelci in Aydın. Hamdi Bey bought 20 and 30 acres of land at various places in Aydın, such as Köşk, Koçarlı and İncirliova.

“AYDIN’S HERITAGE HAS BEEN TRIED TO APPROACH”
Stating that he found more than 30 of the lands registered in the name of Hamdi Çengelci, who died on May 5, 1935, in Aydın, Ersöz said: “However, we know that there are many more. All these lands are in Aydın. When I saw our lands in the Köşk, my heart sank. There is an olive grove in the mansion. He dove with the bulldozer and built an apartment. More of the olive grove still remains intact, but it is unclear who collected the olives. Since Hamdi Çengelci died without anyone, Aydın’s lands were occupied for a long time by his servant and relatives with whom he lived, but they could not conduct transactions. Since the title deed could not be done because there were no relatives or marriage, they went through different illegal ways. All files and documents are at our disposal. After the proclamation of the Republic, some documents such as false diplomas were made before the official declaration of the Turks and the establishment of notaries, and the signing of the one before the Republic was written into its history. There is a fake notary paper. In other words, they tried to seize our heritage in Aydın by issuing fake documents, but they couldn’t seize them all,” he said.

“OUR LANDS IN AYDIN ​​CANNOT BE PROTECTED!
Stating that they officially won the case in the Ankara court last year and are now the legal heirs, Ersöz said: “We now have all the assets of the late Hamdi Çengelci in Aydın. A lawsuit will be filed regarding the lands of Aydın, of which we are currently the legal heirs. While these lands should have been under protection due to the lawsuit, unfortunately, the competent institutions of our state could not protect them. It is also available in the state archives that it is under protection. When we come to see Aydın, for example, they built an apartment on the grounds of the Köşk. Again, the owner of the abandoned office building at the back of İncirliova Municipality is Hamdi Çengelci. The market there also belongs to Hamdi Çengelci. There, someone showed us that we were renting this place from the municipality. This person has received money from the municipality for years. My relatives, who filed a lawsuit in Ankara, are conducting the proceedings individually. “Since last year, a determination file has to be made, but I have not received clear information due to our communication problem with our other relatives,” he said.

“WE DID NOT PASS THE PROCESS TO AYDIN”
Ersöz, who said that once the case is won, the inheritance passes to his family and they have the registration numbers of the title deeds in their hands: “Currently, there are almost 60 heirs . I live in Antalya. We have identified about 300 acres in Aydın. All documents were processed during the Ottoman period. There are records of the lands expropriated during the construction of the Aydın Railway. Even the then Electricity Administration expropriated some of the land subject to this heritage in Aydın for pole planting. During the process, we did not encounter any embarrassment with some institutions in Aydın. In other words, we went through a process in which officials from our state’s Land Registry Department and some judges unfortunately put obstacles in our way. For example, when we asked the judicial authorities to determine the land to which we are entitled, the judge told me that we must first win the case. Officials from the Land Registry Office also blocked us. I really think there is a crowd in Aydın regarding our heritage. We overcame the process in Ankara, not in Aydın. During the 10-year period, we could neither win a case nor progress in Aydın. In the end, we won the case in Ankara,” he said.

“THE LANDS IN AYDIN ​​WILL BE SHARED”
Ersöz, who also informed that a document was destroyed in Aydın archives, said: “Unfortunately, the document showing that Melike Hanım was Hamdi Çengelci’s sister was destroyed in Aydın. The process took a long time because we could not find this document. We went down to the Ottoman archives, but we couldn’t find the lost document. Eventually our lawyer in Ankara produced evidence and that’s how we won the case. We are now officially entitled as legal heirs. About 500 acres of land in Aydın will be divided into 60 and shared with us when the determination file is completed. He has the Thessaloniki leg. The same trial will continue there as well,” he said. 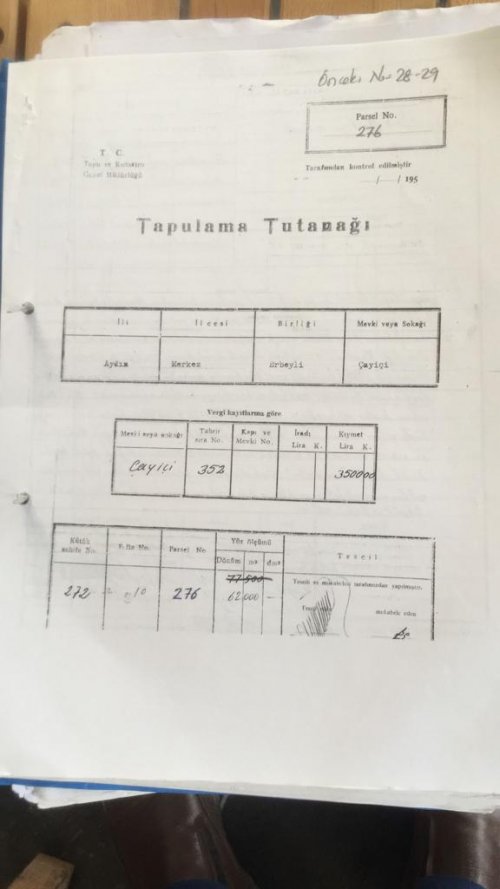 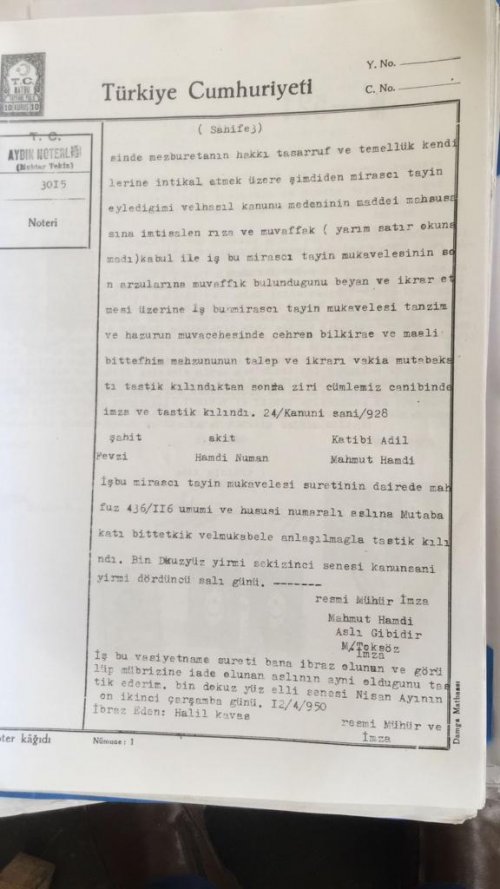 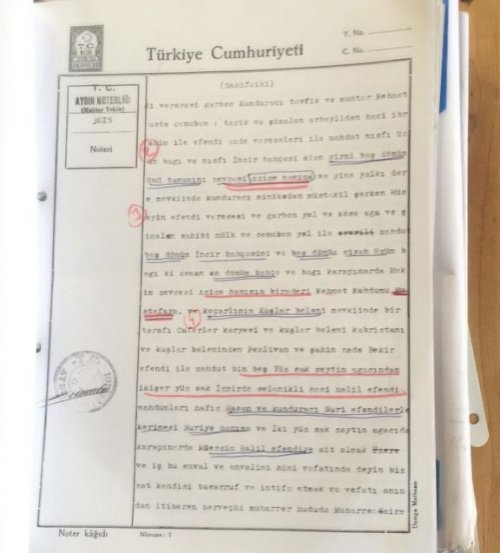 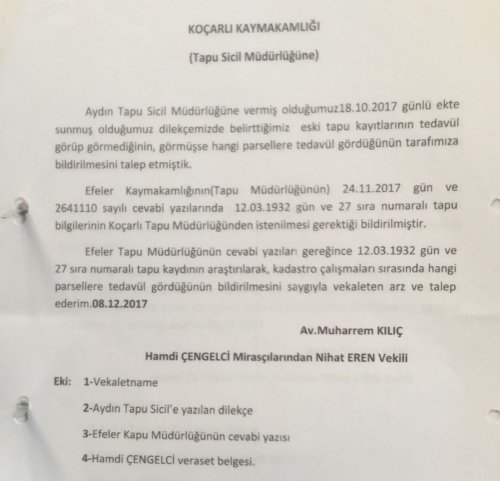 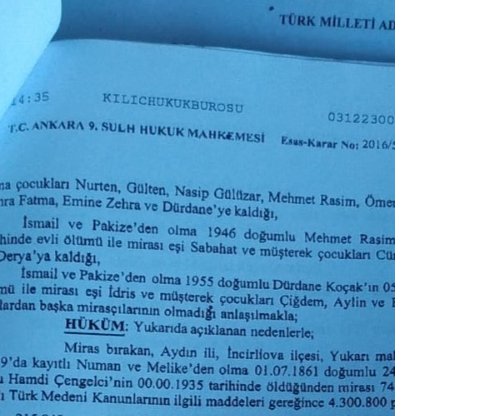 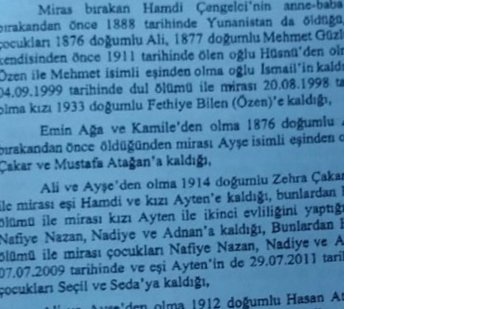 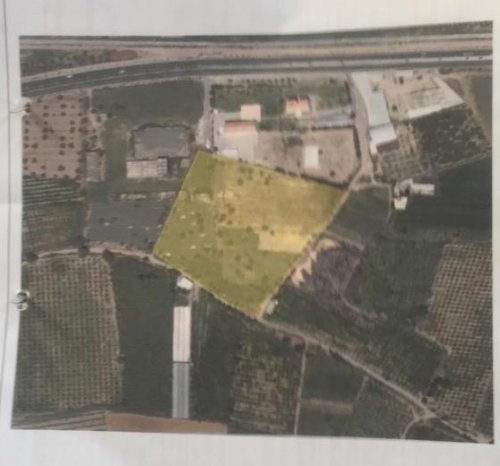