Breaking news: Heavy snowfall and storm, which were described as a “critical day” and warned one after another, have started to take effect in Istanbul. Istanbul Governor Ali Yerlikaya had issued an important warning about the expected heavy snowfall, which has been warning for days. Yerlikaya, who shared on his Twitter account, informed citizens that they are constantly monitoring developments with satellite images and radars. Moreover, the snowfall, which started in Istanbul on Thursday and continued on the third day, increased its effect towards the evening hours, while fog prevailed especially in the regions near the Bosphorus. Visibility was reduced to 200 meters in some places. In the evening, the place turned white due to the sudden snowfall. Citizens who had difficulty in traffic, in particular, left their vehicles on the side of the road and turned to public transport. Here are the details of the last minute snow news in Istanbul…

GOVERNOR YERLIKA SAYS “THE LATEST SITUATION IN ISTANBUL” AND SHARES

Please don’t give up on the event ❗️

In his message at 12:50 a.m., Governor Yerlikaya said, “I sincerely thank our valued TIR drivers and trucks, whom we welcome to parking lots and OHTs during heavy snowfall, for sticking to the rules and keeping their smiles.” used expressions.

To our precious TIR drivers and trucks that we welcome in parking lots and OHT during heavy snowfall ???????

I sincerely thank them for following the rules and not missing their smiling faces.#Istanbulkar

WITH THE SNOW THE FOG SET UP

After warnings issued by the General Directorate of Meteorology, the snowfall, which began to be effective on Thursday, continued intermittently today. In the evening hours, the snow continued its effect with its blizzard, while fog reigned in the regions near the strait. Visibility was reduced to 200 meters in some places. Construction machinery continued to work in order to prevent a possible traffic jam on the roads.

Motorists struggled in some areas as snowfall heightened its effect in Istanbul. The snowfall, which has increased its effect in Istanbul, has given the citizens of Beşiktaş Konaklar district a hard time. As the snowfall, which increased its effect in the evening, struggled for motorists, some vehicles remained on the road due to snow covering the roadway. Citizens, on the other hand, allowed them access to struggling vehicles by pushing them with their shoulders, while some were seen attaching chains to their tires.

THEY LEAVE THEIR VEHICLES BY THE ROADSIDE

As the snowstorm started to take its toll in Istanbul, the place turned white due to the sudden snowfall in the evening. Citizens who left their vehicles on the side of the road in Cevizlibağ turned to public transport. Although there is density on public transport, snowfall is expected to increase its effect in the coming hours.

Following the meteorological emergency committee meeting, Airport Operations and Aviation Industries Inc. (HEAŞ) said in a statement: “Due to adverse weather conditions expected at Sabiha Gökçen Airport, a 30% rate on flights from Sabiha Gökçen Airport between 5:50 a.m. and 2:59 p.m. on March 13, 2022. It has been decided to cancel the flight and all passengers are recommended to follow the latest status of their flights on the websites and the call centers of the airline concerned.

The General Directorate of the National Airports Authority (DHMI) announced that 522 of the 591 scheduled flights from Istanbul Airport were carried out without any interruption.

In the statement posted on DHMI’s Twitter account, “As of Saturday March 12 at 7:28 p.m., 522 of the 591 scheduled flights departing from Istanbul Airport have taken place without any disruption due to the measures taken.” We recommend our passengers to follow the relevant airline’s sharing and announcements, check their flight information and act accordingly,” he said. 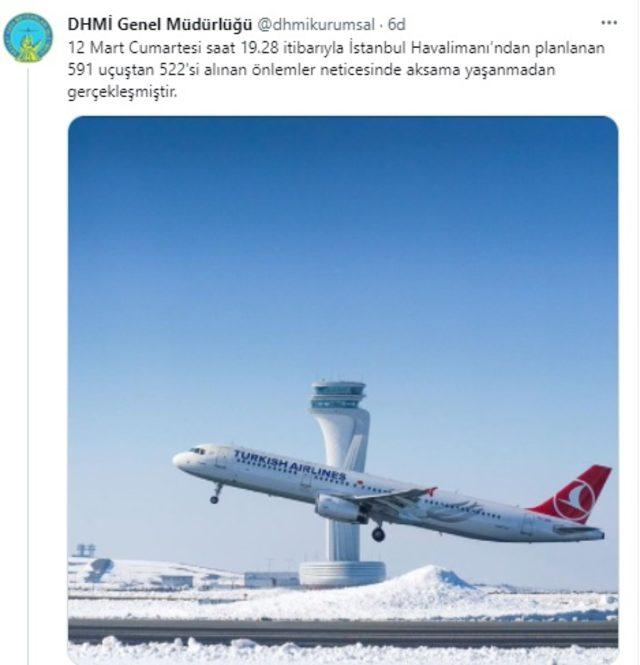 NUMBER OF CANCELLATIONS PER THY INCREASEED TO 279

As Turkish Airlines (THY) was scheduled to take off from Istanbul and Sabiha Gökçen airports today, the number of flights canceled due to adverse weather conditions rose to 279.

In the statement issued by the THY press office, it was stated that there was an increase in the number of canceled flights during the day, “Due to adverse weather conditions, a total of 279 flights, 230 of the Istanbul Airport to/from Istanbul Airport and 49 from/to Sabiha Gökçen Airport, have been canceled on Sunday, March 13. Due to weather conditions, the number of cancellations is likely to increase. expressions were used.

In the previous statement, it was noted that the total number of canceled flights was 192.

“TOO CLOSE TO ISTANBUL”

Governor Yerlikaya said: “The expected severe thunderstorms are very close to Istanbul. “We are constantly monitoring developments from satellite images and radar.” mentioned.

“DO NOT GO TO TRAFFIC”

We are constantly monitoring developments with satellite images and radar.

❗️Please do not go out into traffic unless necessary.
❗️ I ask my compatriots who are in traffic to return to their homes as soon as possible. pic.twitter.com/M5WW51dfkF

İMAMOĞLU: THE MOST CRITICAL DAY

Stating that it was the most critical day for snowfall which was effective in Istanbul, İmamoğlu said: “At the moment, heavy snowfall has entered Istanbul from the north, as indicated by the meteorological experts. This snowfall, which entered from the north, began to show itself in our districts and neighborhoods on the Black Sea coast. He is expected to dominate all of Istanbul in Turkey. Therefore, very heavy snowfall is expected to continue until midnight. 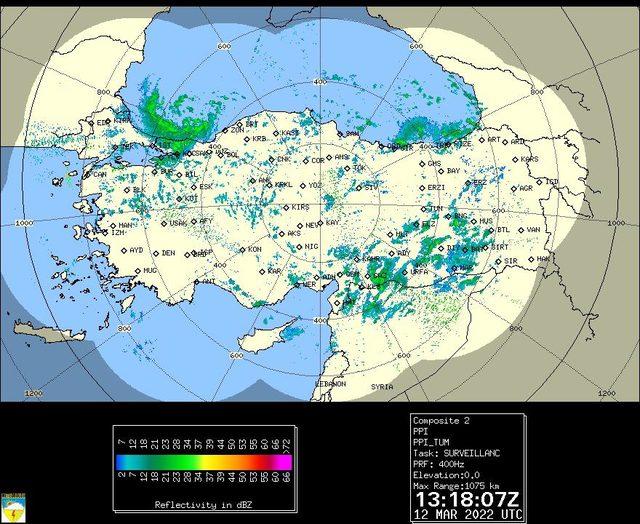 In the radar image shared by the General Directorate of Meteorology, heavy snowfall in Istanbul attracted attention from 16.18.