The Gezi case, which led the Committee of Ministers of the Council of Europe (EC Committee of Ministers) to initiate the sanction procedure against Turkey on the grounds that it had failed to implement the Court’s decisions European Court of Human Rights, has reached the decision stage. The verdict is expected to be delivered at the April 22 hearing.

Some leaders of Anadolu Kültür, founded by Osman Kavala, have been arrested and previously acquitted members of Taksim Solidarity have been summoned to testify, a civil society activist Yigit Aksakoglu has been arrested.

“The indictment was announced 1.5 years after Kavala’s arrest”

A year and a half after Kavala’s arrest, the indictment was announced. The indictment, which was accepted on March 4, sought life sentences for Kavala and the other defendants. Hearing records were tendered as evidence.

The Constitutional Court, despite the contrary opinion of its rapporteur, rendered the decision of “no violation” against Kavala by a majority of votes. On June 24, July 18 and October 9, the eviction requests were denied. It was decided to continue Kavala’s detention.

The European Court of Human Rights has announced the violation decision regarding Kavala’s individual petition. It ruled that Kavala was arrested on political grounds without reasonable suspicion and demanded that it be terminated.

The court did not take into consideration the decision of the ECtHR on the grounds that it was “not finalized”. It was decided to continue Kavala’s detention.

Witnesses heard during a secret trial

The reasoning that the decision of the ECtHR was “not finalized” continued to be used. There have been cases such as “witnesses” taken away from the defense and heard in secret hearings. And Kavala’s detention was decided to continue. 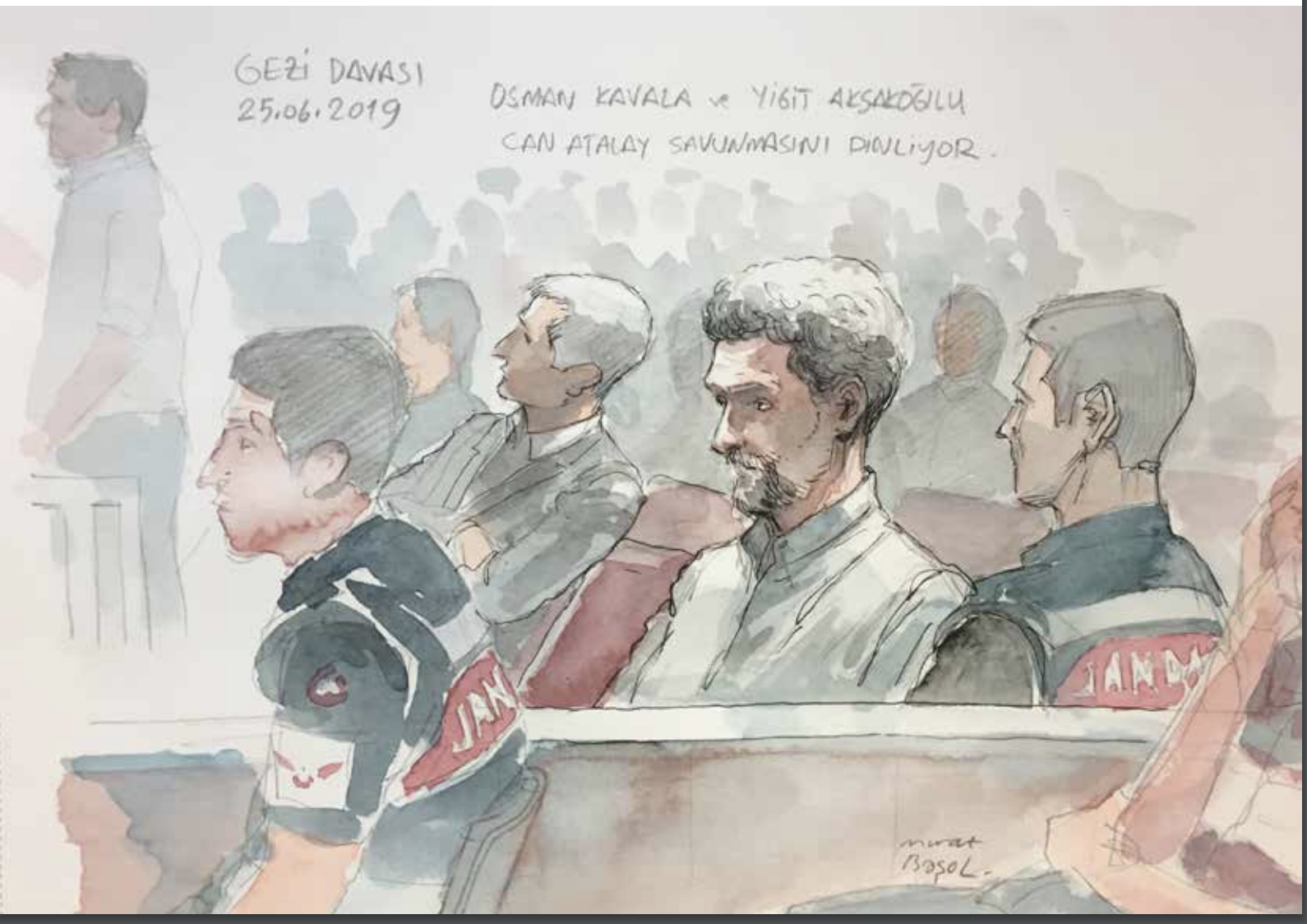 In his reiterated opinion on the charges in the indictment, the prosecutor requested aggravated life sentences for Osman Kavala, Mücella Yapıcı and Yiğit Aksakoğlu.

Osman Kavala was acquitted, he was detained again on the basis of another investigation.

The 30th High Criminal Court in Istanbul decided unanimously to acquit Osman Kavala and some of the defendants, and to separate the files from those who were abroad. On the same day, Kavala was detained again on the basis of another investigation before being released from Silivri prison.

President and President of the AKP Recep Tayyip Erdoğan for acquittal”They tried to acquit him with a maneuver. makes the statement.

Kavala was not even brought to the courthouse, he was arrested again

Kavala was arrested again as part of the TCK Section 309 investigation. Later, another arrest warrant was issued under Article 328 of the Turkish Penal Code”. Kavala, whose deposition was not even taken, was not even brought to the courthouse.

Turkey’s objection to the violation of rights given by the ECHR was rejected.

A petition was submitted to the Committee of Ministers of the Council of Europe stating that the decision to release Osman Kavala taken by the ECHR had not been implemented.

The Committee of Ministers of the Council of Europe demanded the implementation of the ECHR violation decision concerning Kavala and the immediate release of Kavala.

Putting Kavala’s individual petition on its agenda, the Constitutional Court announced that the decision meeting on Kavala was postponed for five days.

The Istanbul Prosecutor General’s Office prepared an indictment demanding Kavala’s punishment under Articles 309 and 328 of the TCK and submitted it to the 36th High Criminal Court.

The 36th High Criminal Court in Istanbul accepted the new indictment. Osman Kavala’s detention has been decided to continue.

The Committee of Ministers of the Council of Europe announced the provisional decision of the Constitutional Court to examine the file in accordance with the decision of the ECHR without further delay.

During the hearing held at the 36th High Criminal Court in Istanbul, it was decided to continue the detention of Osman Kavala. 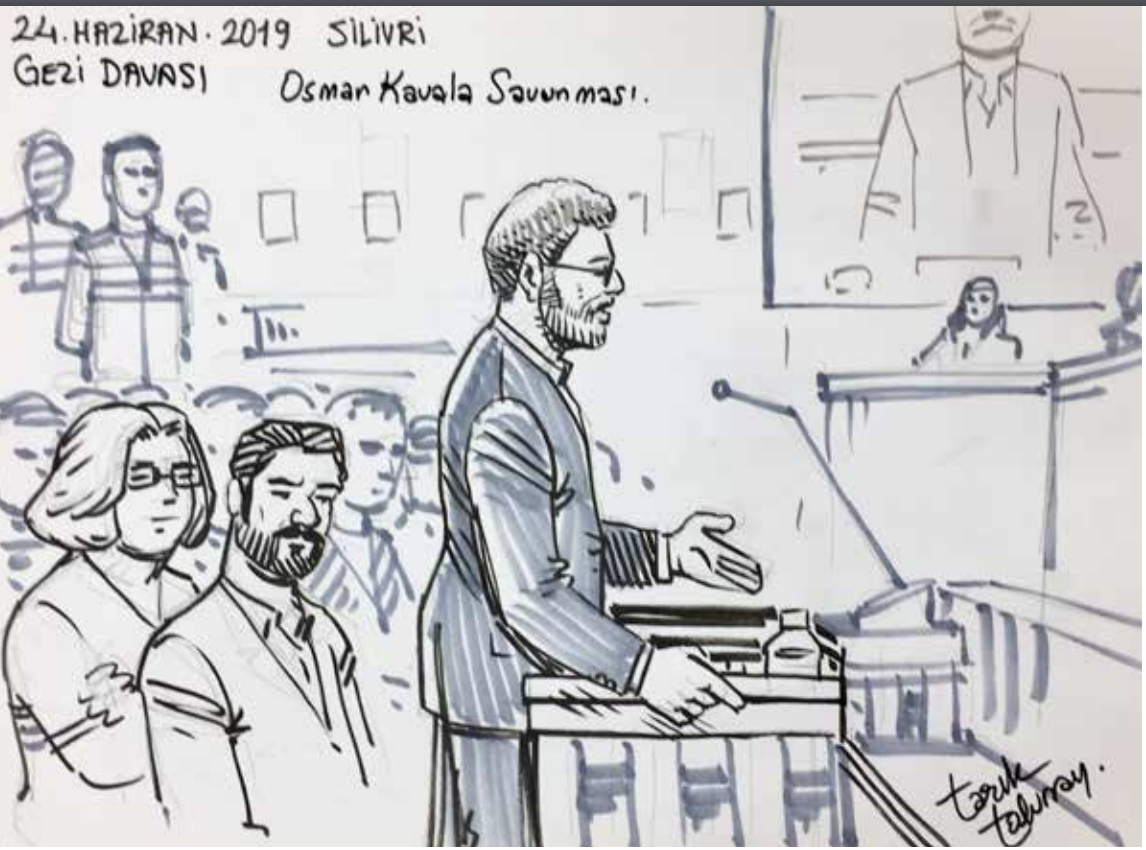 Kavala decision of the Constitutional Court

The Constitutional Court, which considered Kavala’s individual petition, decided that the right to personal liberty and security, guaranteed by Article 19 of the Constitution, had not been violated. The decision was taken by a majority of votes, 7 against 8 votes.

The 3rd Criminal Chamber of the Istanbul Regional Court of Justice overturned the acquittal in the Gezi case in 2020. It returned the case to the 30th High Criminal Court for retrial.

It was decided that the files of the overseas defendants, whose files had been separated during the acquittal decision in 2020, should be consolidated with the main Gezi trial. The acquittal verdict in the Çarşı case, which was concluded earlier, was overturned by the Supreme Court.

Istanbul 30th High Criminal Court requested that the files be combined with the Çarşı and Gezi files. And yet Kavala’s detention was determined to continue.

The Council of Europe’s Committee of Ministers has announced that it will initiate infringement proceedings against Turkey if the ECHR’s decisions regarding Osman Kavala are not implemented and he is not released immediately.

The 13th High Criminal Court did not allow the Gezi and Çarşı cases to be joined. However, two weeks later, the 30th Chief of Heavy Sentences, temporarily appointed to this court, gave his own consent.

The Çarşı and Gezi cases were combined.

The 30th High Criminal Court decided to join the Çarşı and Gezi cases. And of course, the decision to continue Kavala’s detention was made.

The Council of Europe’s Committee of Ministers reiterated its demand for Kavala’s immediate release and warned that failure to do so would lead to violation proceedings.

At the first hearing held at the 13th High Criminal Court after the merger, Osman Kavala’s detention was decided to continue.

10 ambassadors call for immediate release of Kavala in joint statement

In a joint statement, ambassadors from 10 countries, including the United States, Canada and New Zealand, as well as 7 EU member states, called for Kavala’s immediate release.

Regarding the ambassadors’ statement, President Erdoğan said: “BWe cannot afford to host the flours in our country” he has answered.

Osman Kavala decided not to attend the hearings

Osman Kavala issued a statement and said he had decided not to attend the hearings, saying the president’s accusations and insults against a person whose trial is still ongoing destroy the possibility of a fair trial.

After the merger, in the second hearing held at the 13th High Criminal Court, it was decided to continue Kavala’s detention.

The Committee of Ministers of the Council of Europe launched the first phase of the violation process for Turkey, which did not release Kavala despite the ECHR decision.

The Committee of Ministers of the European Commission has also accepted the second stage of the “violation procedure” initiated against Turkey. President Erdoğan “We do not recognize those who do not recognize our courts” mentioned.

The combined Gezi and Çarşı cases were again separated

The Gezi and Çarşı cases, which were merged by changing the presiding judge, were again separated. As the lawyers have pointed out, forced consolidation is the primary rationale; The decision to maintain Kavala’s detention was reiterated.

Immediately after the cases were separated, the prosecutor quickly gave his opinion. In the 72-page opinion, baseless allegations were repeated and aggravated life sentences were sought for Osman Kavala and Mücella Yapıcı.

The prosecutor, who did not respond to the question of what crime and under what article Kavala’s lawyers were seeking detention, asked for the detention to continue. The court also decided to maintain Kavala’s detention. The hearing was adjourned, given the request for time for the defence.