The agricultural freeze, which was in effect across Turkey last month, hit Mersin hard. Despite the actions taken by growers across the province, the unexpected drop in air temperatures has both dramatically reduced yield and devastated the grower. Especially in the central Mediterranean district of Mersin, during the agricultural frost suffered on the night of March 19, the air temperature fell to minus 7-8 degrees and all vegetables, especially hard-stone fruits, were badly damaged. While fruits such as peaches, nectarines, apples and plums did not even bloom due to the frost disaster, vegetables such as tomatoes, peppers, eggplants and cucumbers grown under cover did also been burned. As the young lemon trees in the lemon trees dried up, growers began to cut down the fruit trees, especially the nectarines, which weren’t even flowering. There are almost no more peppers and tomatoes in the greenhouses.

Chairman of the Mediterranean Chamber of Agriculture in Mersin, Musa Yılmaz, together with the UAV journalist, visited the greenhouses and gardens affected by frost in the Kazanlı district of the Mediterranean district, which is one of the most important vegetable and fruit production centers in the country, and received information from producers. Yılmaz wandered through the dried lemon orchards and pepper greenhouses that produced so little you could count with his fingers that he took the chainsaw in his hand and helped the growers who cut down the nectarine trees.

The President of the Chamber of Agriculture, Yılmaz, in his statement here, said that the producers were in great difficulty due to the agricultural freeze suffered in Mersin last month. Stating that there is a serious decrease in the yield of greenhouse production due to agricultural frost, Yılmaz said, “There is a low yield in all our products, especially pepper; yield dropped by 50%. We live in tomatoes, cucumbers, all greenhouse products. Therefore, the lower the yield of a product, the higher the price of that product will be. In addition, the production costs of our products that we manufacture under cover are very high. We cannot follow the price. With these input prices, we don’t see much chance of this farmer surviving,” he said.

Noting that, in the determinations they made after the agricultural frost, especially all stone fruit trees such as peach, nectarine, plum and almond did not leave flowers, Yılmaz said: “While we lamented, we didn’t think it hit our citrus trees so much in the early days. In the next process, we saw that our citrus orchards began to dry up. Until those trees dried up. recover for at least two years, we will spend without buying products there. We don’t know how long we will resist, how long we will endure this,” he said.

“THE CONSUMER CANNOT EAT BELOW 50 LIRA”

Pointing out that there are no more hard seeds in almost all areas of Akdeniz district, Yılmaz pointed out that this situation will be reflected in the prices and said: “The producer will not be able to eat our products in the places leftovers for less. more than 50 lira. We are facing such a problem. In other districts, the coastline up to Anamur is exactly the same in the hard cores. Same in Adana and Antalya. We will have a very serious problem in the hard core,” he said.
Yılmaz, who also listed the grower’s demands so that he can overcome his problems, said, “We demand that farmers’ debts be deferred for at least two years without interest. If our debtor farmers get this deferral, they will get some relief. This year or next year we want some of the two-year crop to be offset and some support given to our farmers, which can be fertilizers, diesel, electricity price support “, did he declare.

“I HAVE COLLECTED 2 TO 2.5 TONS SINCE LAST YEAR, CURRENTLY I HAVE DIFFICULTY COLLECTING 300 KG”

Grower İbrahim Çetinkaya, who owns a pepper greenhouse in Kazanlı, said that although they collected 2.5 tons of stuffed peppers from one acre in the greenhouse last year, they could not collect 300 kilograms for the moment. Stating that they are very much affected by agricultural frost, Çetinkaya said, “We are struggling with the cold in the past and the heat right now. This is also reflected in the prices. Currently, one kilogram of stuffed pepper is worth 11 lira. I don’t know how many liras there are in the market, in the markets. Last year I harvested 2-2.5 tons from here for 3 lira per acre, now I will barely harvest 300 kilos. As a manufacturer, we will not be able to carry out this production under these conditions. We are in a difficult situation, there is no product,” he said. 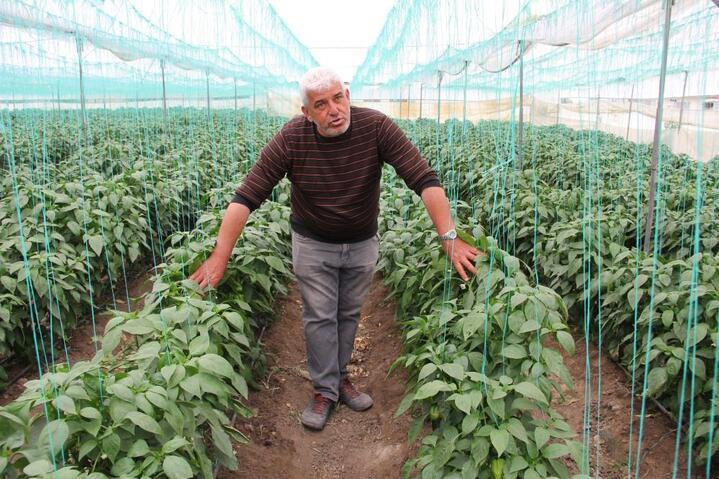 Grower Süleyman Yaman, who has lemon and nectarine gardens, said he has turned all his greenhouses into lemon gardens, but frost is hitting two-year-old trees just when they are about to thaw. bear fruit. We were going to eat the whole bread, in a cold the harvest was completely over. We expected about 200 tons of harvest from a total of 45 decares of lemon orchard, not even a flower. We ate the same shot we ate lemon, nectarine. That’s why we had to cut it. Plus a single fruit on it. We’re going to cut the 15 acres,” he said.

Yaman, who said he was looking for an alternative about 5 years ago saying “Why can’t the manufacturer win”, said he also works as a brokerage and transport company. Yaman said, “Unfortunately, there is a place where this money is eaten; it eats the money from the agricultural product directly to the consumer. Pepper is 11 lira on the market today. It costs around 16-17 Lira with its labour, freight and transport. We see that the etiquette in the markets is 30 lira. Tomatoes cost 3-4 lira here, 25-30 lira in the markets. This money is not in the pocket of the referent, the producer or the broker. Where is this money? It’s either at the market, or at the greengrocer, or in the markets,” he said.