The Disaster Symposium of the Union of Turkish Engineers and Architects Chambers (TMMOB) has kicked off in Ankara. The three-day symposium will end on Friday, April 22. TMMOB Board Chairman Emin Koramaz said that we are going through a period when disasters are becoming more frequent and the inadequacy of public institutions in disaster preparedness is evident.

One day in Ankara

On the first day of the symposium, which began at the Education and Culture Center of the Chamber of Mechanical Engineers of TMMOB and allowed attendees who are not in Ankara to follow it online, the chairman of the organizing committee from the symposium Selçuk Uluata, TMMOB Board Chairman Emin Koramaz and Ankara Metropolitan Municipality Mayor Mansur Yavaş gave his opening speech.

TMMOB Board Chairman Emin Koramaz pointed out that the symposium aims to “develop the organization in the areas of preventing natural events in Turkey from turning into disasters, risk assessment, disaster preparedness and crisis management during disasters”. Noting that the government and local governments are not fulfilling their responsibilities in disaster preparedness, Koramaz said, “The ideas we discussed at the first disaster symposium we held made a significant contribution to the development of TMMOB policies in this area”.

WE GIVE BAD EXAMS

Stating that we are going through a period where disasters are becoming more frequent and the inadequacy of public institutions in disaster preparedness is evident, Koramaz summed up:

“As TMMOB, we are a mass professional organization that has adopted the principle of using the scientific and technical knowledge we have regarding our professional fields for the common benefit of our country and our people. As you know, disasters are natural or man-made events that cause physical, economic and social loss to people and interrupt their normal life. We frequently experience many of these disasters recently, from epidemics to wars, from earthquakes to fires, from floods to landslides, from severe weather events to avalanches. The most important truth these experiences teach us is our level of disaster preparedness that determines how badly we will be affected by disasters, regardless of their type and size. Unfortunately, as a country, we always give bad tests in this regard. Since we cannot develop an integrated disaster management policy, we try to manage the process with temporary, instantaneous and individual reactions when faced with disasters. 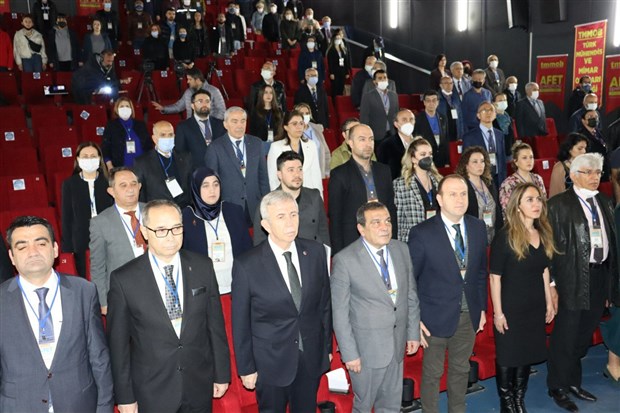 We have a disaster strategy where searchers and rescuers become heroes when there is an earthquake and firefighters when there is a forest fire. However, just as disasters are not supernatural events, we do not need and should not have heroes with supernatural powers in the fight against disasters. What we need are not heroes, but institutions that act under the guidance of science and technology. Instead of burdening the fight against disasters on the shoulders of heroes, we should make plans to include activities such as prevention, risk reduction and pre-disaster preparedness, and we should equip local governments and institutions governments to implement these plans.

Every request made without heeding the warnings of scientists, TMMOB and its chambers comes back to us like a disaster. This disaster sometimes becomes an apartment collapsing out of nowhere, sometimes a flooded settlement, and sometimes our forests on fire. We can say that the question of non-compliance with the warnings of professional organizations took on a whole new dimension during the AKP period. We live in a period where the TMMOB and other professional organizations are systematically excluded.

THE PUBLIC MUST BE ACTIONED

“During the preparatory work for our symposium, we essentially classified the natural events causing disasters into ‘geological’, ‘hydrological’, ‘meteorological’ natural events. We have tried to deal with the processes that transform these natural events into disasters and the human management of these processes. Disaster management, disaster and emergency preparedness, planning, implementation and control, institutional and organizational studies, legislation and legal aspects, education, economics-politics of disasters, social dimensions of disasters became the main topics of our symposium. Symposium panels and sessions will cover scientific studies and experiments on these topics.

If public investments are not at the level they should be, the suggestions that will emerge here cannot possibly have any value.

The public should take action so that a process that requires engineering knowledge can begin.

As long as the general economic orientation is in the direction of reducing public employment and reducing public spending and investment, it is nothing more than an illusion to expect the public administration to assume its responsibilities in the disaster preparedness and post-disaster process.

On the agenda for today’s symposium, disaster and emergency preparedness, establishment and safety of buildings against disasters, planning, implementation and control, climate change and disasters, the education of tomorrow, legislation and the legal aspect, the responsibilities and the legal dimension of the damage caused by disasters to engineers, architects and town planners and the social, economic and ecological dimensions of disasters.