The Ministry of Treasury and Finance released a statement on its social media account regarding the introduction of the TL bond in securities sales.

In the statement, it was stressed that efforts to protect the value of the Turkish lira and fight against dollarization continue with determination.

In the statement made by the ministry, it was stated that the said amendment is valid for agreements made between residents in Turkey and not between non-residents and residents.

The statement made by the ministry included the following statements:

“As known, in the Presidential Decree of 12.09.2018 and numbered 85 and Decision No. 32 on the protection of the value of Turkish currency published in the Official Gazette of 13.09.2018, the value of the contract and other obligations of payment in certain types of contracts to be concluded between them in foreign currencies. Certain regulations have been made regarding the fact that it cannot be determined in currency denominated or indexed to foreign currencies, and the exceptions determined by our ministry after these regulations are included in Article 8 of Communiqué no.

By Press Release No. 2022-32/66 amending Press Release No. 2008-32/34 and published in Official Journal No. 31814 of 19.04.2022, the ninth paragraph of Article 8 mentioned “However, payment obligations subject to the contract are in Turkish lira”. must be completed and accepted. sentence has been added, the phrase “agreed” in the fifteenth paragraph has been replaced by “decide, pay and accept”.

“The fight against dollarization continues”

Our ministry continues with determination to prioritize the use of the Turkish lira and to fight against dollarization under free market conditions, in accordance with the main objective of the foreign exchange legislation established to protect the value of Turkish currency.

In this context, with the said modifications; The exception, which allows contract prices to be determined in foreign currencies or indexed to currencies, in movable sales contracts is retained in order not to disrupt the functioning of the market and the continuity of exchanges, but by making it compulsory to performance and acceptance of payment obligations in Turkish currency, public institutions and organizations and companies of the Turkish Armed Forces. Empowerment Foundation, on the other hand, are intended to be exempt from this obligation.

On the other hand, persons residing in Turkey;

1. In connection with the execution of contracts for the sale of furniture concluded between them before 19.04.2022, the condition for the execution and acceptance of payment obligations in Turkish currency under negotiable instruments in foreign currency put in place circulation before the effective date of press release No. 2022-32/66 is not requested,

2. Failure to require payment obligations under invoices issued before 19.04.2022 to be fulfilled and accepted in Turkish currency,

No obligation between national residents and foreigners

• That the term “immoveable” in the Communiqué covers all kinds of goods and assets which do not fall within the definition of an immovable,

• Checks etc. issued in foreign currency on and after 19.04.2022, the effective date of the amendment. It is not possible to use payment instruments for the fulfillment of payment obligations subject to contracts for the sale of securities concluded/to be concluded between residents of Turkey,

• It is noted that the amendment does not include a provision changing the current status of vehicle sales contracts, and that the contract price and other payment obligations arising from such contracts in vehicle sales contracts to be entered into between residents of Turkey after the change, as before the change on 19.04.2022, are in foreign currency or pegged to a foreign currency that cannot be determined

• Contracts concluded concerning transactions carried out within the framework of Law No. 4749 regulating public finance and debt management are subject to the seventeenth paragraph of article B of the Communiqué and the obligations relating to these contracts are not within the scope of the amendment made on 19.04.2022,

• Within the framework of Law No. 6362 on the capital market and the regulations made on the basis of this law, the creation, issue, negotiation and transactions of capital market instruments (including instruments of the foreign capital market and certificates of deposit and shares of foreign investment funds) in foreign currencies currency is possible in accordance with the eighteenth paragraph of article 8 of the Communiqué and the obligations relating to these transactions do not enter into not within the scope of the amendment of 19.04.2022,

• It is useful to clarify that no changes have been made regarding the acceptance and performance of payment obligations in Turkish currency regarding contracts other than movable sales contracts in the other paragraphs of Article 8 of the Communiqué, and that the existing exceptions are valid.“ 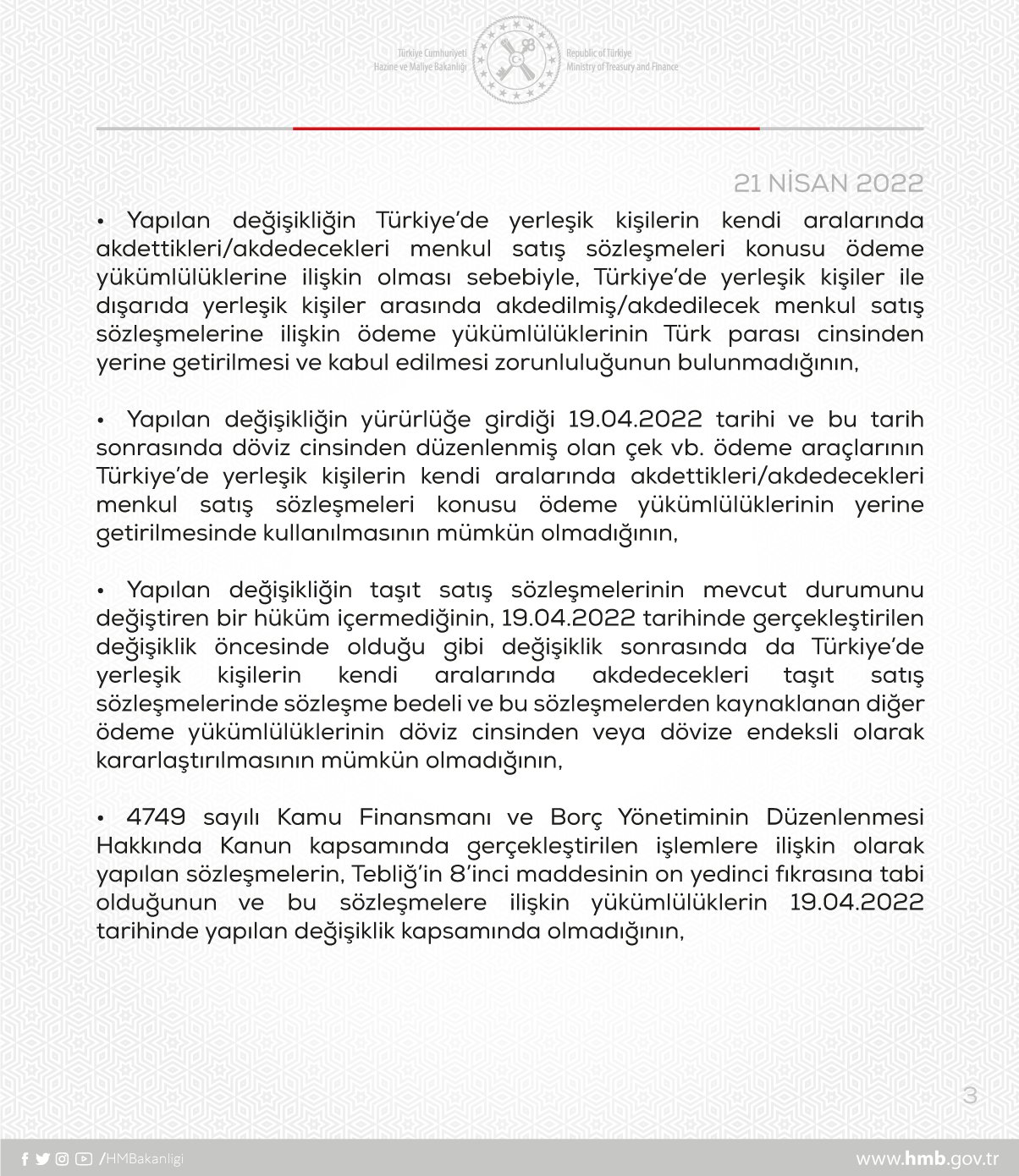 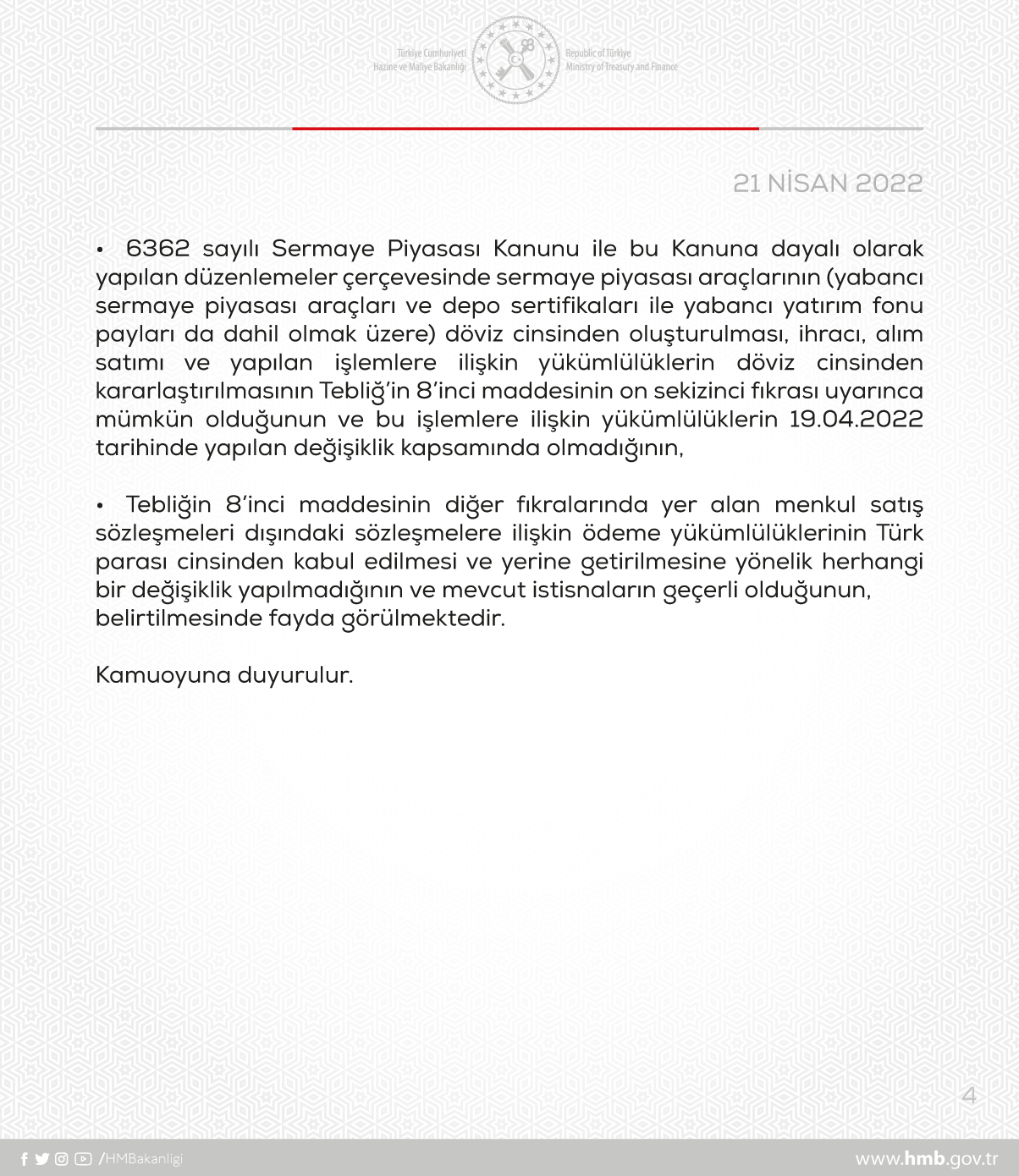