CHP leader Kemal Kılıçdaroğlu, who failed to pay the bill in protest against electricity hikes and whose electricity was cut off after 2.5 months, said: “We will pay the bill a week later , the important thing was to make our voices heard. We made our voice was heard, but did the palace hear it? Has the palace heard the oligarchs? I wonder if the AK party “Some of my close friends are doing cheap heroism saying, ‘Let’s pay your electricity bill.’ They still don’t understand what I’m doing and why I’m doing it. Electricity is a small number for me, but there are millions of people who can’t pay that bill, they don’t know it,” he said.

CHP President Kemal Kılıçdaroğlu answered questions from İsmail Küçükkaya on Fox TV’s revival live broadcast. Kılıçdaroğlu, who failed to pay the bill for protesting against rising electricity prices and was cut off after about 2.5 months, responded to AKP supporters who offered to pay the bill.

Kılıçdaroğlu said: “We will pay the bill a week later, the important thing was to make our voice heard. We made our voice heard, but did the Palace hear it? Did the Palace heard the oligarchs? Close friends of the AK party are doing cheap heroism saying, ‘Let’s pay your electricity bill.’ And again?’” They couldn’t understand what I was doing or why I was doing it. The electricity bill is a small number for me, but there are millions who cannot pay this bill, they don’t know it,” he said.

Kılıçdaroğlu also spoke about the 6-party table meeting where opposition leaders will meet on April 24 and said that the issue of election security will be discussed during this meeting.

Kılıçdaroğlu’s speeches are as follows:

Electricity is a human right. That’s why I took this step. Our neighbors had brought light fixtures with a tube. It is dark, of course, but we have lit the house a little. Many thanks to all my neighbours. This is an individual action, not a mass action. Resistance indeed.

RESPONSE TO AKP PEOPLE WHO ADVISED TO PAY THE BILL

In fact, automatic payment has been ordered, incoming invoices are deposited like that. It doesn’t cost much, maybe a thousand liras. The question was not to pay or not, but to be the voice of the citizens who could not pay. Mothers know best the pain of a mother in a house without electricity. We will pay the bill in a week, the important thing was to make our voice heard. We have made our voices heard, but has the Palace heard? Did the palace oligarchs hear? Some close friends in the AK Party are doing cheap heroism by saying “We’ll pay your electricity bill”. They still don’t understand what I do, why I do it. What you call electricity bill is a small number for me, but there are millions who can’t pay this bill, they don’t know it. Saray actors don’t bring assurance of family support, I promise that when we bring it, no family will be left in the dark. 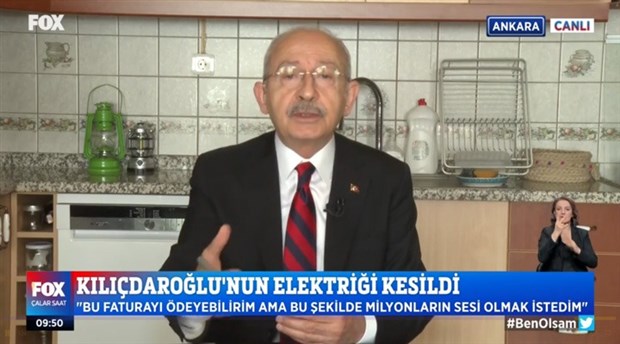 The honorable presidents of the National Alliance have called. They expressed the importance of awareness. The silence of a house due to a power failure the World Cup. They saw that a home without electricity is a sight we don’t deserve in the 21st century. I want a wide audience to see it. I wanted to show that the state is not well governed. I didn’t want there to be a crowd in front of my house. It is an individual effort. I haven’t heard any reviews yet, but there may be some. The important thing is to be the voice of the victim.

I appeal to power. Give me an electrical check. In fact, I always bring a suggestion behind every review I do. They did, but they did it late.

The policy followed, namely the neoliberal policy, is the impoverishment of the state, but the enrichment of a handful of people… A certain group is extraordinarily enriched. They took the electricity distribution companies and handed them over to a group. So you give, they earn extraordinary profits. The citizens have come to pay, but despite this they are not doing their duty. I also know that the gang of five took their billions abroad and where they kept them. I am not aiming for a Turkey where the oligarchs win, but a Turkey where the people win. We will do it. 4 million subscribers are without electricity. Extraordinary hikes. According to the figures of 2021. According to the figures of 2022, it means that there is a great catastrophe, they do not explain these figures. The state protects the rights of its citizens. The Palace will take care of it. Wait patiently… We will bring democracy to this country.

We said that you give a bonus equal to the net of the minimum wage. Explanations were made as if we could either. Then Erdogan made some positive statements. Then they said no, we won’t. If you really want to live comfortably in your retirement, stop this system of assigning your taxes to a handful of people. Get your hands on your conscience when you go to the polls. Think of you, your children. Enough is enough, now it’s fair. Will the minimum wage be below the poverty line? If you keep the minimum wage below the hunger line, people are devastated there. We will replace them, so no one should worry. We want our people to live in palaces. We will change this order.

As an independent newspaper, our goal is to contribute to the emergence of a true climate of democracy and freedom in the country by delivering the truth to the people. For this reason, we use the income we generate from subscriptions to implement better journalism and to allow our readers to encounter information on a more qualified and reliable basis. Because we don’t have a boss whose bank account we have to inflate; fortunately that is not the case.

From now on, we will continue our journey with the same sense of responsibility.

To join us on this journey and not miss a day

One day; strong with you, free with you!