The privatization of electricity distribution under the pretext of “quality and cheapness” turned into a fiasco. 78% of the 130,000 complaints filed with EMRA in 2021 are related to the electricity sector. The most common complaints are cuts and high bills.

The privatization of electricity distribution by dividing it into 21 regions in 2013 has been problematic. While the price paid by citizens to distribution companies has increased exponentially each year, deficiencies in infrastructure have meant that blackouts have become commonplace. The negative impact of the privatization of electricity distribution, supposed to bring quality and cheapness, was reflected in the 2021 reports of the Energy Market Regulatory Authority. On the other hand, with the first days of the new year, the exorbitant rise in the price of electricity angered the citizens. Tens of thousands of people who couldn’t pay their bills flocked to the streets, shopkeepers hung the bill they couldn’t pay on their shop windows. According to data from the Department of Family and Social Services, the number of families needing electricity is increasing every year. In 2021, the number of households whose electricity was cut off because they could not pay their electricity debt exceeded 2 million.

In the country, where 6.6 million households have had to live on social assistance due to the economic crisis, millions of citizens have found themselves in need of support for electricity consumption after the exorbitant hikes electricity prices. Even based on official figures, the powerlessness of populations in the face of growing poverty is revealed. 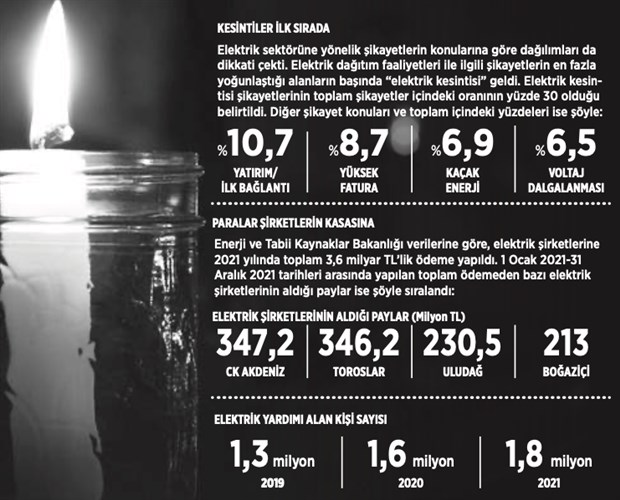 THERE IS A SOLUTION, EMERGENCY EXPROPRIATION

The Board of Directors of the Chamber of Electrical Engineers pointed out that citizens had become unable to pay their bills after sharp increases in electricity. Recalling that there are frequent power cuts, the statement said: “At this time when we are experiencing the most technologically advanced levels in history, billions of people around the world and millions in our country are struggling access to basic energy resources”.

Millions of people are getting poorer

Emphasizing that as energy monopolies plunder the planet’s natural resources and impoverish billions on the one hand, the statement states: “The neoliberal economic policies shaped by the World Bank and the IMF are creating more and more poor people, while by causing the concentration of assets in a smaller number of people. In the statement titled “The end of privatization was bleak, the only solution is expropriation”, it was pointed out that Turkey could not wait any longer to reverse the neoliberal destruction that deepened after 2001, and called to the implementation of an expropriation program for a radical Solution group.

WE DO NOT HAVE LUXURIOUS WAITING

“We see that the number of subscribers experiencing power outages in our country has reached an incredible 3 million 449,000,344 as of 2021,” the statement said: “It is becoming clear day by day that we, in As a society, we have come to the point where we cannot afford the costs of privatization and commodification practices in electricity. While there are cuts in millions of households, payments in millions of homes can only be made on welfare. The fact that the privatizations, which were done with the pretense that electricity will be supplied in sufficient quantity, of high quality, continuous and at low cost, led Turkey to an expensive and opaque structure which lacked security of supply. . Millions are condemned to darkness at the cost of increased profits for a handful of capitalists.

WE INVITE TO PARTICIPATE

Our country no longer has the luxury of waiting to reverse this neoliberal destruction that intensified after 2001. It should be made clear that even if the legitimate demand for the withdrawal of price increases, which is frequently voiced in the public, is carried out, it will not be enough for a solution. As the Chamber of Electrical Engineers, we invite all segments of society, especially political parties, to participate in establishing a gradual and comprehensive expropriation program, starting today.

I WANTED SARAY TO HEAR THE OLIGARC