In the Ottoman era, iftar invitations started after the fourth day of Ramadan in order for people to prepare their bodies and psychology for fasting and to spend their first days with their families.

Since the establishment of the Ottoman state, official protocol, that is, the rules of protocol, had developed. When the month of Ramadan arrived, many activities were done according to traditional rules. One of the most important of these was the invitations to the iftar of the grand vizier, that is to say the prime minister at the time. However, in the Ottoman era, iftar invitations did not start on the first day of Ramadan as they do today. The invitations would start after the fourth of Ramadan so that people prepare their bodies and psychology for fasting and spend the first days of Ramadan with their families. However, there have also been times when iftar invitations have started on the third and seventh nights of Ramadan.
The Grand Vizier and other high-ranking statesmen invited the ulema, bureaucrats and military dignitaries to iftar according to finely defined protocol rules, starting on the 4th of Ramadan. teacher. Dr. Maturity Beydilli and Ertuğrul Yildirim’It has research on how official iftars were held in the Ottoman era.

An iftar given by the Grand Vizier.

THE FIRST ULEMA WAS CALLED
The most important of the iftar invitations were the banquets that the Grand Vizier gave in his mansion. Lists of statesmen who would attend at the Grand Vizier’s invitation were prepared and presented for the Sultan’s approval. The first to be invited to the invitations were the class of ulema. the fourth day of Ramadan “selatin”, that is, the sheikhs of the mosques built by the sultans, the sheikh al-Islam on the fifth day, the Rumelian and Anatolian kazaskers on the sixth day, and the nakibuleşraf, who kept the records of the descendants of our Prophet, would attend the invitation of the Grand Vizier. Later, army chiefs and bureaucrats would have iftar at the grand vizier’s table on days determined according to their duties. Arrival and departure would be ceremonial.
Janissaries and Janissary leaders would visit the mansions of the viziers for iftar on the 15th day of Ramadan in the 16th century, and after the 20th day of Ramadan in the 18th century, beginning with the grand vizier.
The ulema, who used to go to the Grand Vizier’s iftar in the early days of Ramadan, began to go to the Sheikh al-Islam’s mansion for iftar in the following days. This tradition is based on the fact that in the second half of the 18th century he was a sheikh al-Islam and it is said that more delicious dishes were cooked in his mansion than in the sultan’s palace. Salihzade Camgoz Mehmed Emin Master It was started by (1775-1776).
The invitations ended with the fast-breaking dinner offered to the steward of the mirahurs, the head of the garden and the porters, who served the sultan at the palace on the 24th of Ramadan. In the meantime, those who attended the Grand Vizier’s iftar invitation would attend the banquets of Sheikh al-Islam and other viziers in the following days. The 25th of Ramadan happened in slow motion. Iftar invitations ended on the evening of the 26th day when the vizier visited the Sheikh al-Islam for iftar and Eid greetings. Then the last days of the month of fasting and penance were passed by statesmen visiting each other to congratulate each other. 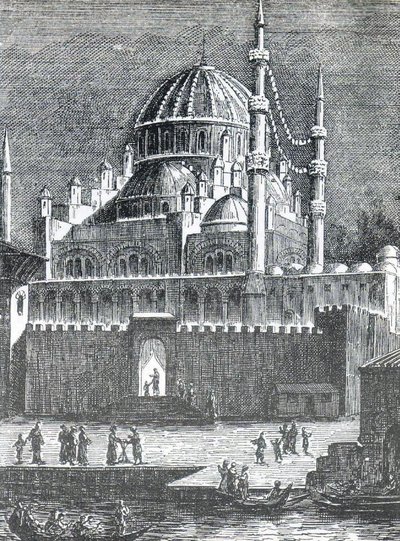 A mosque whose ridges were set on fire.

THE PADISAH AT IFTAR IN THE PALACE
Ottoman sultans usually had their iftar in the palace. It was an exceptional situation for the sultans to have iftar outside the palace. 18th century rulers First abdulhamid (1774–1789), occasional sister Esma SultanHe used to go to iftar in Istanbul’s palaces in Kadırga and Maçka. In the 19th century, however, sultans rarely went to iftar without informing the grand viziers or one of the ulama.
Towards the end of the 19th century, sultans began giving iftar meals to statesmen and members of the military. In particular, he was on the Ottoman throne between 1876 and 1909. II. Abdulhamid, He used to invite soldiers to iftar at Yıldız Palace. Gifts were also given to officers and soldiers who attended the Sultan’s iftar dinner for Ramadan. 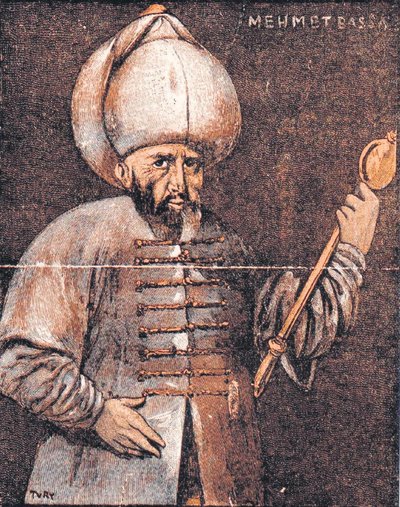 EXPENSIVE IFTARS
During Ramadan, everyone would have an increase in their kitchen expenses. However, the biggest increase was the Grand Vizier’s expenses. Kanuni, II. Selim and III. During the reign of Sokollu Mehmed Pasha, who served as Grand Vizier for 15 years during the reign of Murad I, it was realized that iftar banquets were an unbearable expense, but no solution could be found . Mustafa of Thessaloniki, who wrote the history of the period, criticized the situation of the iftar banquets saying: “It is an old tradition which cannot be abandoned from year to year, it is a great partying and overspending”.
The large expenditures made by grand viziers for iftar invitations continued in the following centuries. At the end of the invitations, depending on the rank of those who came to the iftar, gifts such as gold jewelry boxes and gold chain watches were given. The sheikhs of the Selatin mosque received some and a ball of squirrel fur as a gift.
Besides giving iftar parties to dignitaries for days, grand viziers also sent gifts called “iftariyelik” to the sultan, valid sultan, eunuchs, high palace officials, Sheikh al-Islam and rulers of the ulama.
On the 21st night of Ramadan, the sultans would send food to the grand vizier’s mansion for iftar with the leader of the birds on the 22nd night of the Darüssaade. The Grand Vizier used to present a hilat to the chief of the birds and to the caliph of the bird who brought the food. 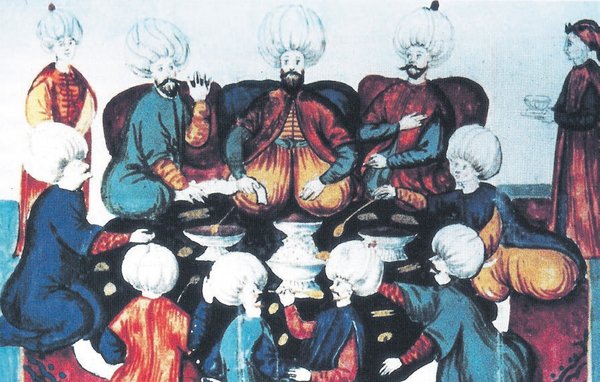 A feast in the Ottoman era.

RAMADAN MENU
Abdülaziz Bey describes iftar invitations in his book “Ottoman Customs, Ceremonies and Traditions”, in which he covers Ottoman social life in detail:
“The tables prepared for the iftar invitations of state dignitaries would be very rich. The most precious plates, brocade napkins, silver basins were brought out for the guests. Bread specially made for Ramadan, long loaves soft pita, various round rolls, in a silver or precious tray for iftar Dates, jams from various fruits, sausages, pastrami, cheeses, olives and zamzam-i sharif in very small crystal glasses called pointed diamonds were served.Two kinds of soup, eggs Saraykari, at least three kinds of dessert, two kinds of pastry and compote, five kinds of meals were served.-There were six kinds of vegetables. Baklava, samsa, revani, Şekerpare and dilberdudağı were preferred for dessert It was considered shameful to have halva flour, cold trotters, cabbage and olive oil dishes on iftar tables in mansions .
Half an hour before iftar, bile or incense was burned in censers placed in a convenient corner of the room, and amber in very polite families. 15 minutes before the evening prayer, the host entered the hall and greeted his guests. When the guests sat down at the table, the imam of the circle began to read the Koran. When the iftar ball was thrown, fasts were broken by drinking zamzam, then the meal began with jams and rolls.”