Hürriyet newspaper writer and former referee Murat Fevzi Tanırlı assessed what happened in the game played between Gaziantep FK and Göztepe in the 34th week of the Super League, in which Göztepe was relegated 4 weeks before the end, following the historical events of the last moments. Should Göztepe show fair play?

Göztepe, who were guests of Gaziantep FK in Week 34 of the Super League, needed to win to keep their hopes of staying in the league alive. Goztepe scored with Jahovic in 90+2 in extra time of the match, whose regular time ended 0-0, and the moments that will go down in history began with that goal.

WHAT HAPPENED BEFORE GÖZTEPE GOAL?

Atakan Çankaya, who collided with his opponent in Göztepe, who returned the ball in midfield, stayed on the ground, the referee stopped the game and came to Atakan. Atakan got up without needing treatment, referee Mustafa Kürşad Filiz passed the ball to the Göztepe players with the referee’s throw. Soner Aydoğdu sent the ball bouncing straight to the goal in the middle circle. Meanwhile, Gaziantep players took their places on the pitch but most of the players stood still after the unexpected shot.

After Soner’s shot, the ball came back from the post and found itself in front of Adis Jahovic, who moved with Furkan Soyalp but did not break his run. Controlling the ball, Jahovic drove his team forward by scoring the goal.

After Jahovic’s goal, Gaziantep football players and coach Erol Bulut objected to the referee that the goal was against the spirit of fair play. After intense objections, referee Mustafa Kürşad Filiz pointed out to the players that the goal was valid.

GÖZTEPE IS DIVIDED INTO TWO

After Göztepe, who needed to win to keep their league hopes alive, took a 1-0 lead, the idea of ​​opening the castle after kick-off in order to respect the spirit of fair play play began to sprout. be discussed in the field. Looking at the footage, coach Tomas, striker Jahovic and Atakan told them to continue the game. 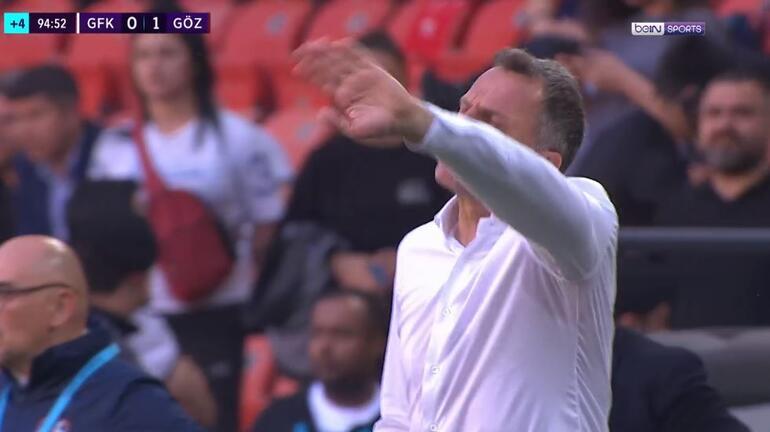 AFTER THE ENTERTAINMENT ATAKAN SLIP WHILE TRYING TO RUN, FIGUEIREDO GOALS

After talks that lasted about 5 minutes, Gaziantep FK kicked off the game. Picking up the ball, Figueiredo headed for goal passing through the motionless opposition players. As he ran as if to stand in front of Atakan, his foot slipped and he fell backwards. Figueiredo, who went all the way to the goal area, sent the ball into the net from the right of stationary goalkeeper Arda Özçimen and the score was tied. This score meant the relegation of Göztepe.

MUHAMMET DEMIR MADE THE PENALTY EXPRESSLY

Then it was Gaziantep FK’s turn to show some fair play. 90+9. Muhammet Demir, who took the ball from Gaziantep FK, who earned a penalty after goalkeeper Arda dropped Figueiredo in the second minute, consciously kicked the ball and the match ended 1-1.

With this result, it was certain that Göztepe would be relegated with 4 weeks remaining. 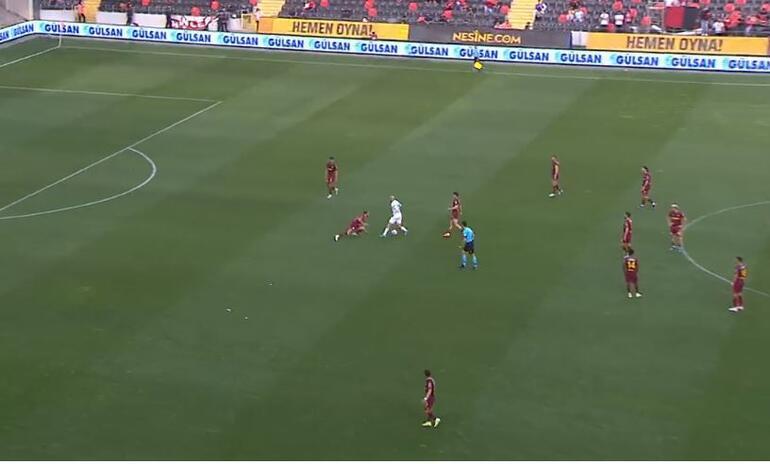 TOMAS: I SAID MY PLAYERS CONTINUE BUT…

Relegated Göztepe coach Stjepan Tomas commented on what happened at the end of the game with these words:

I didn’t see the full position of our goal. My players also said something, but I didn’t quite understand. Then the leaders from above declared that the position was normal. I told the players to continue, but they made such a decision. Gaziantep footballers also made such a decision from the penalty spot, perhaps because they felt guilty.

EROL BULUT: WHEN THE COMPETITOR SHOWED THE EXAMPLE OF FAIR-PLAY, WE WANTED TO BE THE SAME

Gaziantep FK coach Erol Bulut said the following about it:

The last 10 minutes of the match were much more exciting than the first 80 minutes. They showed an example of fair play when the opponent scored a goal with the referee’s throw in the final moments. In this position, our players left the game to the opponent with the aerial ball, but they scored. As our team did not put pressure on the opponent in this position, we also opposed the goal. In this situation, the opponent had to turn around after receiving the ball, but he played forward and scored a goal. Afterwards, our opponent gave us the ball with fair play, and we equalized. In the ensuing penalty position, our players showed an example of fair play. Mami took the ball out of the penalty spot. After that, the match ended in a draw.

MUHAMMET DEMIR: HE WON’T BEAT US, I DON’T REGRET

Muhammet Demir, who deliberately sent off the last-minute penalty at Gaziantep FK, is also on the subject; “The last 5 minutes of the match, which went quite normally, were quite interesting. It would have ended 0-0 without Soner’s position. They scored a goal. Even though the team was going to be relegated, they allowed us to score 3 points. We scored the goal, we won a penalty a minute later. If they hadn’t allowed it, there wouldn’t have been a penalty either. I had strange feelings. I thought it would not suit us to relegate them here after the fair play they showed. I made such a decision for myself, we made it together. It seems that we we made a decision together as a team. I still feel weird, I have no regrets.” he said.

JAHOVIC: I DON’T WANT TO SAY ANYTHING

Adis Jahovic, who registered Göztepe’s number, after the match; “I didn’t get involved much there, I don’t make any statements. Of course, we are professional football players, everyone works on the pitch. I ran into the position and scored. Then I don’t want to explain too much.” mentioned.

Gaziantep’s Maxim pushed Atakan back in midfield. Referee Mustafa Kürşad Filiz did not see this contact, which was a clear foul, as he was not watching the action, but looking at his watch.

When he looked up, he saw Atakan lying on the ground and stopped the game. Afterwards, the scandal called kindness began:

TOP WAS IN GÖZTEPE

The ball was under the control of the Göztepe players before the referee stopped the game. All the players took their places on the field when play resumed with the referee’s throw. The referee naturally placed the ball in front of Göztepeli Soner. The player also sent a shot directly into the opposing goal. Jahovic completed the ball on the way back from the post and scored the goal.

THE FIRST GOLDE WAS NOT WRONG

As a result, the Göztepe players put the ball back into play, which they already had before the game was stopped, as they deserved. In other words, there is no situation that Gaziantep will suffer. He also shows with obvious body language that he is about to start play before the referee lays the ball down.

THE WORD IS OVER, THE LEAGUE CONTINUES!

Due to pressure from the gentleman of Gaziantep management, Göztepe players had to open their castle and they were forced to score a goal even though they never showed any unsportsmanlike behavior. More treasures… Gaziantepli Muhammet deliberately kicked the ball auta during the penalty shootout in the dying moments of the game. The word ends, the Super League continues!