Arkas Line has taken significant steps to reduce its carbon footprint, while reducing its carbon dioxide emissions beyond its target. The company continues to use low sulfur fuel in its vessels, which have signed various projects on the one hand and determined within the framework of the regulations on the other.

The dangerous scale of global climate change requires the protection of natural resources on the one hand and attention to sustainable development on the other.

Arkas Line, one of the Arkas companies, which carries out regular maritime transport with container ships in the Mediterranean, the Black Sea, Northern Europe and West Africa, goes beyond regulations to this regard.

THE ARKAS LINE EXCEEDED ITS OBJECTIVE

Arkas Line, which was the first and only member of the CCWG working group composed of 16 shipping companies which hold 85% of the world’s container transport and more than 85 global customers and freight forwarders, in Turkey since 2013, continued its operational activities between 2011 and 2020. Thanks to the improvements, it has reduced its CO2 emissions by 26.2% and exceeded the target by 25%. Following the practice of the International Maritime Organization (IMO) of reducing the sulfur content of fuel used in ships from 3.5% to 0.5% in accordance with the MARPOL convention, Arkas Line has switched to using VLSFO fuel in all vessels and reduced sulfur emissions. 82.8%.

Arkas Line, which has been a member of EcoVadis, the world’s most trusted corporate sustainability rating agency for global supply chains, since 2015, has a silver medal according to the 2021 CSR rating. EcoVadis CSR (Corporate Social Responsibility), which consists of four main headings: environment, rights of employees, ethical values ​​in the life of the company and sustainability, and 21 underlying criteria, the extent to which a company integrates the principles of CSR in its activities and management. systems.

REDUCE FUEL CONSUMPTION WITH THE MINI-CHIPS

The “Mini-Chip (Minimizing Carbon Footprint)” project, initiated by Arkas Line in cooperation with PROMATECH Maritime Technologies and Brunel University in London, was successfully completed after four years. As a simulation setup, the project offers an innovative “decision support system” for freight carriers to reduce fuel consumption, minimize carbon footprint and reduce costs without sacrificing the quality of transportation operations. As a result of the tests, it was observed that the correct timing of fuel and refueling reduced the total fuel consumption by 5-10%. Mini-Chip, which is the maritime industry’s first study to measure carbon footprint with service and cost objectives, also has analytical methods to determine the complex relationships between vessel speed decisions, selection of refueling points, fuel prices, late penalties and port uncertainties. .

As the European Union (EU) draws a new roadmap for the green economy with the “Green Agreement”, the agreement signed during the 26th Conference of the Parties to the United Nations Framework Convention on Climate Change (COP26) includes the gradual reduction of fuels for the first time.

Arkas, on the other hand, will take the necessary steps in this regard and monitor its sustainability efforts and long-term transformation strategies within the framework of the “European Green Consensus Working Committee”, which was formed with the joint participation of companies under the aegis of en porter. She will share her eco-responsible projects currently being implemented and the new action plans to be developed with Arkas employees on the “Blues for Green” platform. The task force’s objective is to educate all Arkas employees on sustainability issues, create training content, measure and monitor carbon footprint, and determine pathways within the framework. harmonization with the EU Green Deal.

The Arkas TURMEPA II waste collection boat, which started its operations as part of the project initiated in cooperation with Arkas and TURMEPA, which attaches great importance to the seas in terms of social responsibility as well as trades, has completed its 15th season . Since 2006, the amount of wastewater collected by the Arkas TURMEPA II waste collection tank has reached 2 million liters. With the project, it has been ensured that 15.3 million liters of seawater remain clean.

Continuing to take action for the protection of the marine ecosystem today, as in the past, the number of Arkas Shipping Fleet ships fitted with ballast water treatment systems installed over the past four years has grown to 75% across the entire fleet. 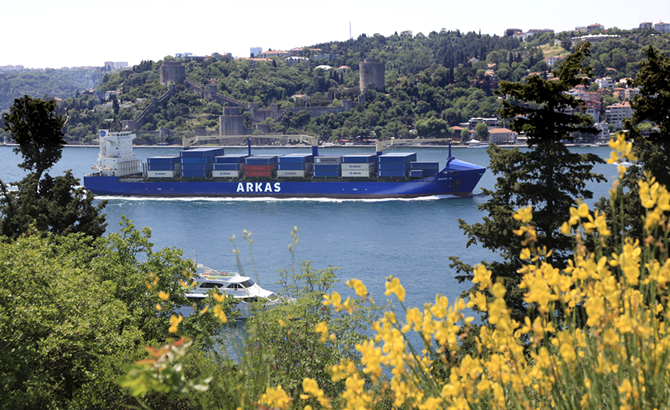