A statement came from the municipality on the allegation that a person named Şafak D., who allegedly works for the Istanbul Metropolitan Municipality, was linked to a terrorist organization. It was reported that the person in question worked on a project basis and that his salary was funded by the International Labor Organization (ILO) and the German National Cooperation Organization (GIZ). In the statement it was stated that the person has no criminal record, when reviewing his CV he was working as an intern at the Sakarya Children’s Home Coordinating Center affiliated with the Ministry of Family and Policy in 2015, and that the same person has been working voluntarily with the AKP’s Sultanbeyli Municipality since 2021. It was reported that he also participated in the Refugee Association.

Today, in some media, it was claimed that photographs of a woman named Şafak D., who allegedly works as a social services specialist at IMM, with members of the PKK, with a gun, appeared . It was said that the individual in question had been investigated by the Home Office over the allegation that he was linked to terrorism and had been detained.

Describing the news as “a conspiracy-like initiative and practice against IMM and its chairman”, the Istanbul Metropolitan Municipality (IMM) issued a statement on the allegations in pro media.

In the statement, it was stated that the person worked on a project basis and on a temporary basis within the framework of international cooperation, and that his salary was financed by the International Labor Organization (ILO) and the National Organization German Cooperation (GIZ).

In the statement, which states that the person’s criminal record has been checked and is clean even though he is in charge of temporary projects, he was informed that his CV was also reviewed and it was found that he was working as an intern at the Sakarya Children’s Homes Coordination Center affiliated with the Ministry of Family and Social Policies in 2015.

In the written statement made by the İBB, regarding the photograph in question, “Although it is stated that the photo subject of the news was taken in 2016, it has been determined and confirmed that the person in question worked in a private nursing home for the elderly in Istanbul between 2016 and 2018. In addition, the same person He also participates in the Association of Refugees, which has been working on a voluntary basis with the Municipality of Sultanbeyli since 2021.

On the other hand, the municipality’s statement reacted to the fact that Şafak D. was not detained for 8 days and was detained while in the İBB building, and said: “On April 27 2022 (today) at 10:26 a.m. the person who entered our social services building was arrested just 5 minutes later at 10:31 a.m. We find this significant and leave the matter to the public’s discretion,” reads the press release.

The full statement made by IBB is as follows:

“Today, in some media outlets, photos of a person named Ş.D., believed to be an IMM social services specialist, with a gun allegedly belonging to 2016 in the camp of the organization terrorist, were published, and they were intended to establish a link between the IMM and the terrorist organization.

First of all, it should be noted that; The subject of the news is the employee who works in project mode and on a fixed-term basis within the framework of international collaborations. The payment of the salary of the person concerned throughout the project is financed and carried out by the ILO (International Labor Organization) and the German National Cooperation (GIZ). The first project, which started on June 1, 2021 and ended on December 31, 2021, is “Supporting decent work for refugees and host communities”. The project which started on March 1, 2022 and will end on December 31, 2022 is the project “Development of digital capacity for economic enterprises and employment”.

Moreover, although the person in question was employed in a fixed-term project, his criminal record was noted and his record was found to be clean. The criminal record is attached. Again, when looking at the CV of the person in question, it can be seen that he worked as an intern at the Sakarya Children’s Homes Coordinating Center affiliated with the Ministry of Family and Social Policy in 2015. Similarly, although that it is stated that the photograph which is the subject of the news was taken in 2016, it has been determined and confirmed that the person in question worked in a private retirement home in Istanbul between 2016 and 2018. Furthermore, the same person works at the Association of Refugees, which has been working on a voluntary basis with the Municipality of Sultanbeyli since 2021. 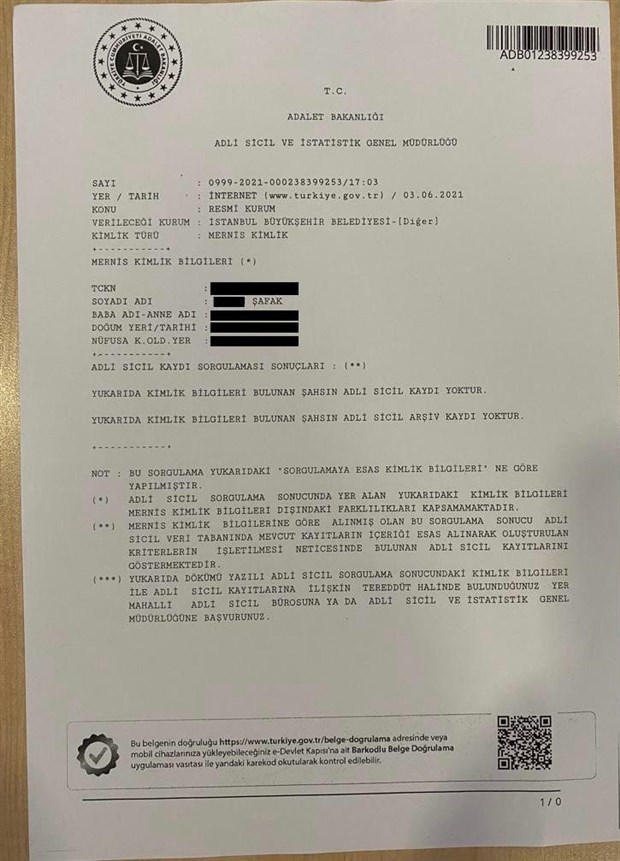 “WE ARE AWARE OF CONSTRUCTION INITIATIVES”

In a national problem such as terrorism, Istanbul Metropolitan Municipality has so far cooperated with all institutions of our state and will naturally continue to do so. However, we would like to point out that we are also aware of the conspiracy attempts against İBB and its chairman Ekrem İmamoğlu. Here we would like to inform the public of the following important information:

The first search of the alleged member of a terrorist organization by the security forces was carried out on April 19, 2022 by presenting himself to our Department of Social Services. The security forces were informed that the person concerned was on administrative leave because he was going to undergo surgery.

The alleged member of the terrorist organization was admitted to Haydarpaşa Numune Hospital under his own name on April 18, 2022 and was released on April 20, 2022. He rested in his own residence for 7 days.

After 8 days, the security forces made no arrests either at the hospital or at his home, almost waiting for the person in question to enter the IMM building.

We find it significant that the person who entered our social services building on April 27, 2022 (today) at 10:26 a.m. was not taken into custody until 5 minutes later at 10:31 a.m., and we leave the matter to public discretion. “