In the match played at the Etihad Stadium, Manchester City’s goals were scored by Kevin De Bruyne in the 2nd minute, Gabriel Jesus in the 11th minute, Foden in the 53rd minute and Bernardo Silva in the 73rd minute, while Karim Benzema scored the points for Real Madrid. in the 33rd and 82nd minutes (from a penalty) and Vinicius Jr. in the 55th minute. checked in.

The second leg of this match will be played on May 4 at the Santiago Bernabeu.

A RECORD AND INTERESTING MATCH

Many events went down in history during the Manchester City – Real Madrid match, which ended 4-3.

First goal of the semi-finals

Kevin de Bruyne, who shook the opposing nets in the 93rd second, scored the first goal in the history of the semi-finals of the Champions League. This goal also went down in history as Manchester City’s first Champions League goal.

Semi-final match with the most goals

No more than 7 goals scored in a match in the semi-finals of the Champions League. The Manchester City – Real Madrid match was the first semi-final game which ended 4-3. In the first of two other games with 7 goals scored, Ajax beat Bayern Munich 5-2 in 1995, while Liverpool beat Roma in 2018 with the same scoreline.

For the first time in the history of Real Madrid…

Real Madrid, who fell 2-0 with goals conceded in the 2nd and 11th minutes, conceded two goals in the first 11 minutes of a match for the first time in Champions League history.

Karim Benzema does not stop

Karim Benzema, who left 2 goals in the net for City, reached 41 goals in his 41st game this season. The French striker is enjoying his first season in which he scored more than 40 goals at the age of 34. Benzema has become the 5th player in Real Madrid history to exceed 40 official goals in a season.

Benzema also became the first player to score more than 40 goals in a single season for Real Madrid since Ronaldo left the team in 2018.

After 33 minutes, Karim Benzema scored his side’s first goal at the Etihad, making it 2-1 at 8:34 p.m. local time. Benzema, who said he was fasting during Ramadan and it gave him extra strength at every opportunity, scored his goal 1 minute before 8:35 p.m. Manchester’s iftar time. The French star broke his fast at half-time and entered the second half.

Benzema’s most talked about Panenka penalty

Karim Benzema, who missed two penalties 7 minutes apart in Osasuna’s La Liga game at the weekend, lost to Manchester City.
When he was behind the ball 4-2 against him, at 82 minutes, when he collected the ball in the penalty which was won, everyone was thinking about the penalties missed during the Osasuna game. The French striker, however, calmly slipped the ball into the net of the goal protected by Ederson, courting Panenka’s penalty from fellow French legend Zinedine Zidane in the 2006 World Cup final.

Speaking about Panenka’s post-match penalty, Benzema said; “All the keepers work on my shots on goal, so I changed my shot. I was pretty cool and I scored. I’m very confident. If you don’t take a penalty you can’t miss it. ” mentioned. 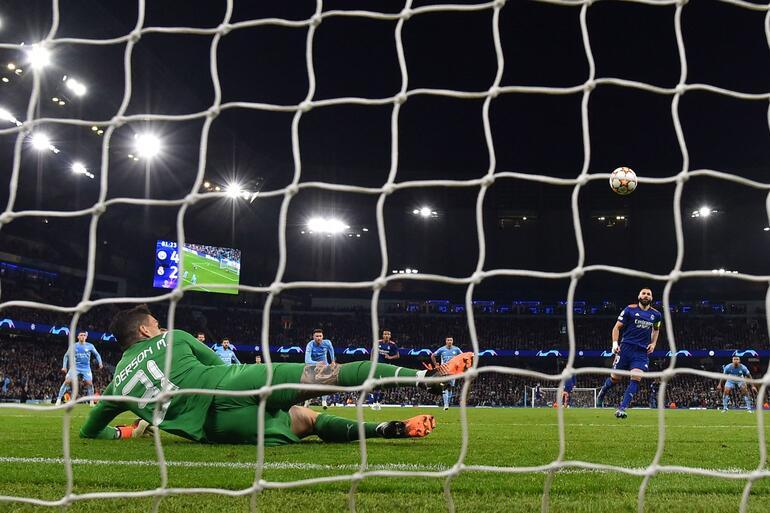 The “advantage” app that catches the referee’s attention

Zinchenko, who fired the ball just outside Real Madrid’s penalty area in the 74th minute of the game, was left on the ground with Kroos intervening. Romanian referee Istvan Kovacs, who was close to the position, blew the whistle, but just as he was about to blow, he saw Bernardo Silva pick up the ball and enter the penalty area. The surrounding Real Madrid players paused for a moment due to a foul, but as Kovacs signaled an ‘advantage’ with his arms, Bernardo Silva sent a terrific shot into the goal and sent the ball into the net to give his team a 4-2. advantage.

Manchester City, who started the second half with Foden’s goal and made it 3-1, were about to relax but two minutes later the difference was reduced to one with the only Vinicius goal. The 21-year-old Brazilian, who got rid of Fernandinho with a big body movement on the left midfield line, went to goal and sent the ball into the net from Ederson’s left and carried the score 3-2. After the match, footage of the moments when Manchester City manager Guardiola realized they were going to score a goal before Vinicius’ goal and were upset, surfaced on social media. 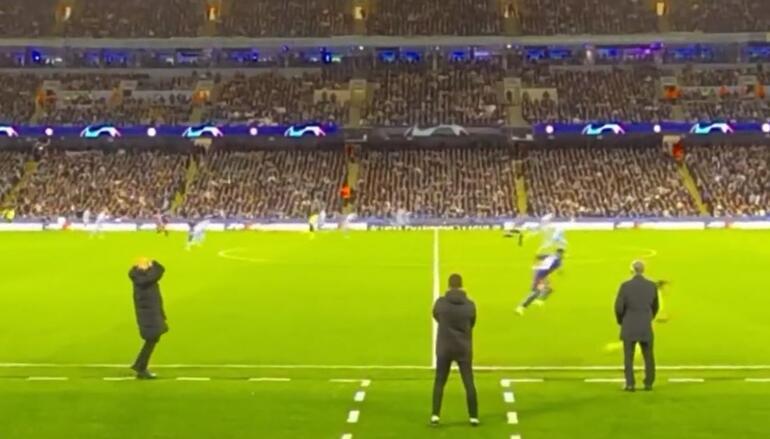 Guardiola, who watched the fight in the line of sight of a phone camera at the side of the pitch, is deeply saddened when Vinicius overtakes Fernandinho with his body theft. The Spanish coach, who collapsed after putting his head in his hands, attacks the 4th referee after conceding the goal.

It was a match enjoyed by the public. We had fun too. Of course, 4-0 would have been better for us, even 8-0… But those scores would be just a fairy tale against a team like Real Madrid. You have to play a very good game in Madrid to reach the final. We did everything we could, we played very well, but unfortunately we are going there with only 1 goal difference. Our job in Madrid will not be easy. Real Madrid players aren’t scared even when they’re down 3-0, they don’t fall out of the game. I like it so much. It has nothing to do with luck. It was a good match, everyone experienced the excitement. We are confident for the second game. We have to defend better at the Bernabeu. I don’t know if Benzema will win the Ballon d’Or but I can definitely say he is the best player this season in the Champions League.