Eintracht Frankfurt, who took a strong lead ahead of the final by beating West Ham United 2-1 away in the first game of the UEFA Europa League semi-finals, continue to make a name for themselves with their performances in Europe this season. While Galatasaray and Fenerbahce have also been influential in the German team’s epic run in Europe, Barcelona have managed to be the scene of some of the most interesting moments of recent years.

Eintracht Frankfurt, one of this season’s most successful teams in the UEFA Europa League, faced West Ham United in the first match of the semi-finals. The European performance of the German side this season, which won a wink in the final by beating their opponents 2-1, caught the eye.

After collecting 60 points in the Bundesliga last season, Eintracht Frankfurt finished the league in 5th place and earned the right to participate directly in the UEFA Europa League. While the biggest change in the German squad was to the technical team, Oliver Glasner took the coaching seat in place of Adi Hütter, who took charge of Borussia Mönchengladbach.

In the new season’s squad structure, Frankfurt sold Adrien Silva, the most important attacking asset, to RB Leipzig, and was replaced by Lindström from Bröndby and Petter Hauge from Milan. The German side, which signed young player Ali Akman from NEC Nijmegen, started the season without any major squad changes.

FENERBAHÇE MISSED IT IN THE FIRST MATCH! PELKAS…

Starting the season with a new understanding, Frankfurt managed to catch the attention of early touring groups in Europe, despite a poor start in the Bundesliga. The German team, which has drawn more attention from Turkish football fans due to being one of Fenerbahçe’s rivals in UEFA Europa League Group D, played their first game against Fenerbahçe at the pitch .

Fenerbahce took a 1-0 lead thanks to Mesut Özil’s goal in the 10th minute. Frankfurt countered that goal with Lammers in the 41st minute. In the last minute of the match, the yellow-dark blue team missed a penalty from the foot of Pelkas and the fight ended in a 1-1 draw. Frankfurt, who started their group matches with a draw with Fenerbahçe, did not face defeat in other games against Antwerp and Olympiakos, and finished top of the group with 12 points, with 3 wins and 3 draws.

BARCELONA ADAPTED TO THE SUMMIT OF EUROPE!

Since finishing the group as leaders, they bypassed the play-offs and continued straight from the last 16 rounds, and were paired with Spanish side Real Betis. Winning the opener 2-1 away, Frankfurt drew 1-1 on the pitch and made a name for themselves through to the quarter-finals. While Germany’s quarter-final rivals were Barcelona, ​​the game that made Frankfurt one of the most talked-about teams in Europe was the second leg in Spain.

“WE WERE INSPIRED BY GALATASARAY”

Stating they were inspired by Galatasaray when analyzing Barcelona before the match, coach Glasner said: “I will say it casually and provocatively: if you can beat the fifth team (Betis) in the Spanish league , you can do the same against the third ranked team (Barcelona) Barcelona.” The players cheered after being faced with . They were happy because they’re a dazzling team,” he added. “The guys came out, but I brought them back and said we’ll go to the semi-finals together. We think we will overcome this obstacle. We have seen that Galatasaray have created big problems for Barcelona. Our goal is to do the same. ” had used the words.

THEY END THE BARCELONA SERIES

The German representative, who drew 1-1 with his opponent in the first match, showed a great performance in the away match. Entering the last part of the match with a 3-0 lead, Frankfurt won the field 3-2 despite conceding 2 goals in the last minutes and made a name for themselves in the semi-finals.

TROVA BY THE FANS! 25 THOUSAND PEOPLE…

Not only the great performance of the German team on the pitch, but also the fans of the Trojan horse before the game away from Barcelona made headlines in the European press. While it was stated in German press news that the 5,000 tickets donated to Eintracht Frankfurt before the game had been sold, it was stated in Spanish Sport news that nearly 10,000 Frankfurt fans would follow the match from the stands. .

Shortly before the start of the game, Eintracht Frankfurt fans filled the stands at the Camp Nou, it was said that 79,000,468 people watched the game and the number of Frankfurt fans was at least 25,000. 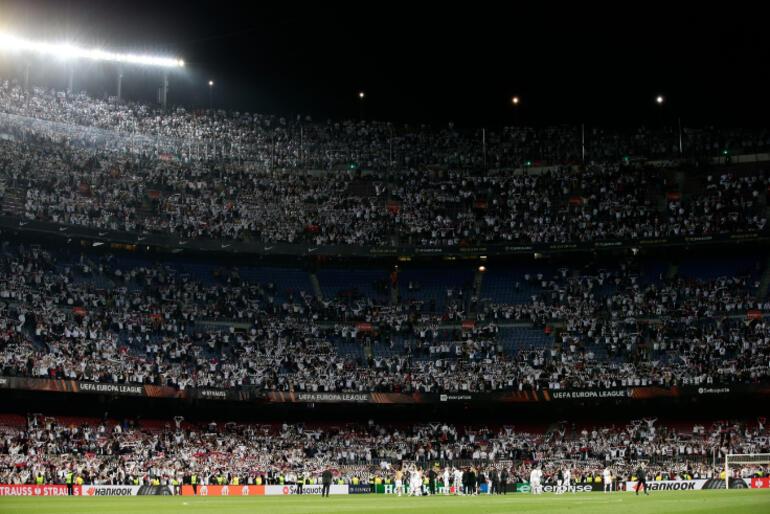 After this incident, the Barcelona front was in great surprise, while the fans criticized the club.

In a statement on the matter, coach Xavi said: “The atmosphere didn’t help us. It was like the final match, the stands were halfway. The club should check what happened. Clearly there was a miscalculation on our part: “We didn’t play our best game, we got hit after shots. It’s disappointing because we had hope for this tournament. Congratulations to Eintracht, they deserved it. Even though we had control of the ball, we weren’t productive.”

President Laporta, meanwhile, said: “What happened in the stands is a disgrace that cannot be repeated. We must review the information we have and take precautions. We must be more strict and ban certain things. As a Barcelona fan, I’m ashamed.” used expressions.

BIG ADVANTAGE BEFORE THE FINAL

The rival of the German team, which reached the semi-finals by sitting on the European football agenda, was West Ham United, one of the standout teams in the Premier League. Eintracht Frankfurt won the opener 2-1 away and took a big lead heading into the final.

THE ONLY DRAW IS IN ISTANBUL

The German representative, who has managed to beat every opponent he has faced in the UEFA Europa League at least once this season, has managed to score goals in every match he has played. Undefeated in 11 matches played, Frankfurt have won 5 of the 6 matches played away from home. Frankfurt’s only away draw was against Fenerbahçe in Istanbul.