In the 34th week of Spor Toto 1st League, Ankaragücü drew 0-0 with Samsunspor, and Ümraniyespor beat Balıkesirspor 4-1 and advanced to Super League, while Istanbul teams dominance at the highest level of Turkish football has attracted attention.

MKE Ankaragücü, who left the pitch with the score he wanted against Yılport Samsunspor in the game played in Ankara, scored 67 and made a name for himself in the Super League again after a one-year hiatus.

By beating Balıkesirspor with a different score of 4-1 in the match played in Istanbul, Ümraniyespor entered its name in the Super League for the first time in its history after Bandırmaspor lost points.

Taking the score to 66 with 3 points, Ümraniyespor’s winning goals were scored by Yacine Bommou in the 3rd minute, Yusuf Emre Gültekin in the 24th and 47th minutes and De Valle 37′.

Founded in 1938, Istanbul team Ümraniyespor enjoyed the joy of qualifying for the Super League for the first time in their history.

With the emergence of Ümraniyespor, the number of Istanbul teams in the Super League increased to 7.

In addition to the 3 major Galatasaray, Fenerbahce and Beşiktaş; Medipol Başakşehir, VavaCars Fatih Karagümrük and Kasımpaşa became the Istanbul teams that will compete with Ümraniyespor in the Super League.

THE NUMBER OF TEAMS CAN BE INCREASED TO 8!

The number of Istanbul teams, which increased to 7 with Ümraniyespor in the Super League, could increase to 8 after the play-offs of the 1st Spor Toto League!

Apart from Istanbulspor, who are currently guaranteed to play in the Spor Toto 1st League, Eyüpspor have the option of playing in the play-offs. While only one of these teams is likely to be promoted to Super League, if that happens Istanbul’s number of Super League teams will be 8.

Ümraniyespor became the 74th team to appear in Super League in league history; For the first time since 1965/66, seven clubs from Istanbul will face off in the top league.

FROM AMATEUR LEAGUE TO SUPER LEAGUE

Recep Uçar, who was Abdullah Avcı’s assistant in Başakşehir and Beşiktaş, became the head of Ümraniyespor in the 8th week of the 2020-2021 season. Uçar finished the season in 8th place with 51 points and started with the championship password in the new season. The red-whites, who occupy the first 2 places throughout the season, have collected 66 points with 20 wins, 6 draws and 7 losses in 33 matches. In contrast, Ümraniye is the league’s top scorer with 58 goals. 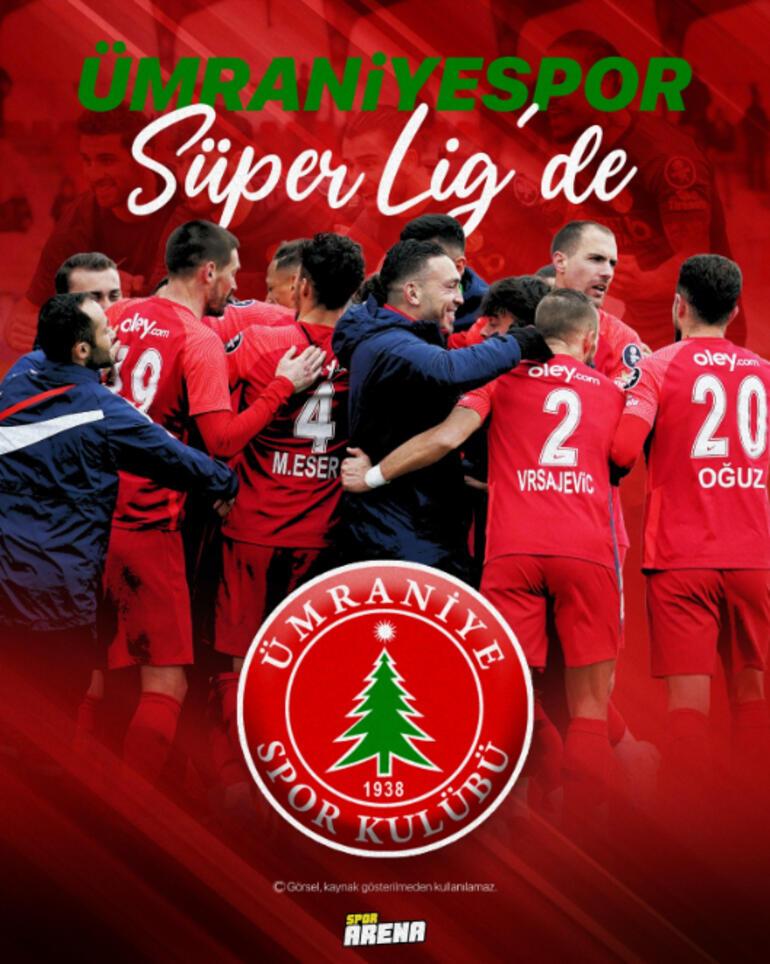 RECEP UÇAR: WE STARTED BECAUSE WE HAVE A DREAM

Having guaranteed promotion to the Super League, Bereket Sigorta Ümraniyespor coach Recep Uçar assessed the success achieved after the game against Balıkesirspor.

“First of all, I congratulate Club Trabzonspor, who celebrated their championship yesterday, their precious teacher, Mr. Abdullah Avcı, who is also my teacher, and his team and their community. They won a championship they deserve so much. He is very happy that his pupil announced the championship the next day. I was born in Ümraniye. I am a person who grew up and spent my whole life here, I am a captain at a young age. We started by saying that we had a dream on October 25, 2020. We are very happy to end our adventure by reaching the Super League for the first time in the history of the club. It has been the 33rd week, we have always been. We were in the top 2. It is a very happy thing for us to achieve such happiness in this league, which is perhaps called the toughest league in the history of TFF 1st League, even though we are a smaller club with less budget, less fan support than many. As Ümraniye, we will challenge everyone like game after game of Samsun, with the power the kids gave me from their games after the league started. I said. Today, I am happy to keep that promise. Now my players, precious team, our president, our sports director, our mayor, all the staff of the club, my family, my children, my husband, my father, my friends and girlfriends who have supported me throughout the season, who have contributed to our achievement of this beautiful happiness. I congratulate our presidents, managers, sports directors, who have rendered great service to this club in the past, and our former footballers, coaches, and above all our supporters, who support the club since the beginning of the season on my invitation. They have as much work as me. Good luck to all in this beautiful championship. May it be a gift to the children of the neighborhood whose streets do not go to the sea.

RECEP UÇAR, TECHNICAL DIRECTOR OF ÜMRANİYESPOR, WAS A VISITOR AT SPORT ARENA IN OCTOBER