Startups that have received investment or are valued at over $1 billion are called unicorns. The PwC report highlights that unicorns will profoundly affect all industries over the next 10 years, and those who adapt will win. New customized solutions and opportunities await the insurance industry.

The word “unicorn” is a concept introduced to the world of start-ups by the famous American investor Aileen Lee. The unicorn, which means “unicorn” in mythology, refers to a start-up company that has received over $1 billion in investment from the entrepreneurial world. Startup founders are usually young people who quit on an idea and started their own business. For the most part, these young entrepreneurs continue to work in their old industries. Although there are rarely unicorn entrepreneurs among them, many of them continue to produce by adding to the sector. These startups not only help the country get investment but also help industries grow faster. In Turkey, there is no startup that received a billion dollar investment in insurance, but there are 2 unicorn entrepreneurs. The first of these was Peak Games, which received a valuation of $1.8 billion. The second was Getir with a valuation of $2.6 billion, another unicorn.

THE UNICORNS OF THE FUTURE

PwC, which provides audit, tax and industry advisory services to public and private institutions around the world, has released a major report on unicorns. The report titled “Living in the World of Unicorns” reveals which sectors are investing the most in startups and where the future of global business lies. In the report, which shows that the fintech, electric vehicle and healthcare services markets are growing and transforming, it says opportunities are also emerging for insurance.

The report highlights that many personal financial transactions that were once expensive, slow or completely impossible are now done with just a few clicks on the phone, while insurance is one of the sectors that has benefited the most. The report indicates that a marketing trend such as “buy now, pay later” has become widespread, digital applications that link international money transfers and financial accounts are attracting attention, and investments are increasing by exponential way. A unicorn, which found a solution on payment systems, which the report shows as an example, raised an investment of 12 billion dollars in the first six months of 2021. This amount is more than double the amount raised in 2020 and more than triple the investment in 2019.

The report warns that this five-year chart will not last 20 years, some unicorns will exit the system, and some will receive more investment than their potential. However, he also states that unicorns are now part of the system and have gained strong positions in many markets. Highlighting that consumer behavior is actively changing, especially in delivery, telehealth, metaverse and electric vehicles, the report says “high signal unicorns need to be weeded out of the noise.” In summary, according to the report, industry leaders must live and transform with unicorns. The definition of unicorn is no longer enough. A new definition is decacorn for companies whose valuation exceeds $10 billion. Overall, there are 52 decacorns. Although the Decacorns are few in number, they attract a significant share of the total capital raised.

According to PwC’s report covering the past five years, more than 800 companies in total have received investments of more than $1 billion. Between 2005 and 2010, only 14 companies achieved unicorn status. There seems to be a big break, a turning point here. According to PwC research, between 2016-21, unicorns raised a total of $565 billion in capital. 37% of this figure belongs to the 52 corresponding decacorns.

Although unicorns have spread all over the world, 80% of investments are transferred to the United States and China. India ranks third. To date, unicorns have appeared in a total of 40 countries. In the 1990s almost all investment was directed towards high technology, internet and telecommunications, but today fintech, industrial technology, mobile technology, health technology, digital assets, entertainment and the media attract the attention of investors.

Almost all areas here are of interest to the global insurance industry as well. In order to meet the needs of the sector, it must support entrepreneurs in these areas.

According to PwC’s analysis, three key trends are expected to have significant impacts in the 2030s. Each of these trends is central to the insurance industry, both in terms of premium growth and risk solutions:

1. Consumer financial services will become “platforms”: The platform economy and the growth of e-commerce have created an unprecedented need for transparent international digital payments. Consumer app platforms have begun to expand by lending beyond payments, creating a sort of “buy now, pay later” credit system. In 2016, 36 fintechs received over $1 billion in investment, while in 2021 that number rose to 159. While the digital banking space had two unicorns in 2016, that number rose to 18 in 2021, and the number of unicorns in the wealth tech space has grown from four to 22 over the same period. The digitalization of the economy also creates the infrastructure for digital currencies to eventually become mainstream. PwC’s research includes a total of 22 unicorns doing business in cryptocurrencies and other digital assets. These companies are creating new exchanges, digital wallets for digital assets, which in turn lay the groundwork for future innovation.

2. From electric vehicle to energy conversion: Sales of electric vehicles increased by 40% in 2020 to reach 3 million. In 2021, it has an annual growth potential of 98%. Government support and regulation allows this market to grow. Many global automakers, lithium battery manufacturers, energy storage companies and charging network providers support this technology. In the field of electric vehicles, 14 of the 17 unicorns are in the USA and China. The emergence of electric vehicles leads to the formation of ecosystems that will include not only the automotive sector, but also energy, logistics and financial services; This leads to the launch of platform-based applications that serve consumers and businesses.

3. Gen Z meets the Metaverse: Educational technology, games and streaming were already in the unicorn spotlight before 2020. They raised $23.8 billion between 2016 and 2019. But during the pandemic, they really took off. Members of Generation Z, born between 1997 and 2012, must have spent most of their lives in the virtual environment during their developmental years. Eventually, the Metaverse became a social phenomenon. 33 entertainment and media companies have achieved unicorn status since 2020. Increased demand for professional users and educators during the pandemic process has increased investment in educational technology. Unicorns in the edtech space raised eight times the annual investment from 2016 to 2019 in one year. Newzoo, which provides analytical solutions for the gaming industry, announced that the gaming market reached 177.8 billion in 2020 with an annual increase of 23%. In broadcast streams, unicorns doubled their investments in the pandemic compared to the 2016-19 period. More widespread adoption of Metaverse, crypto, and 5G could create a web 3.0 economy that will thrive 10 years from now.

4. Return to mobility: Before the pandemic, there were unicorns in the mobility industry. But the pandemic has fundamentally changed people’s mobile behavior overnight. In 2018, mobility companies received $23.6 billion in investments; This figure fell to $7.2 billion in 2020. The number of mobile passengers also fell sharply, so the fledgling industry had to undergo a significant shift in the delivery of food and other goods. At the same time, food delivery, grocery and restaurant businesses have intensified to meet new consumer needs. During this period, 13 of the 32 companies became unicorns during the pandemic. 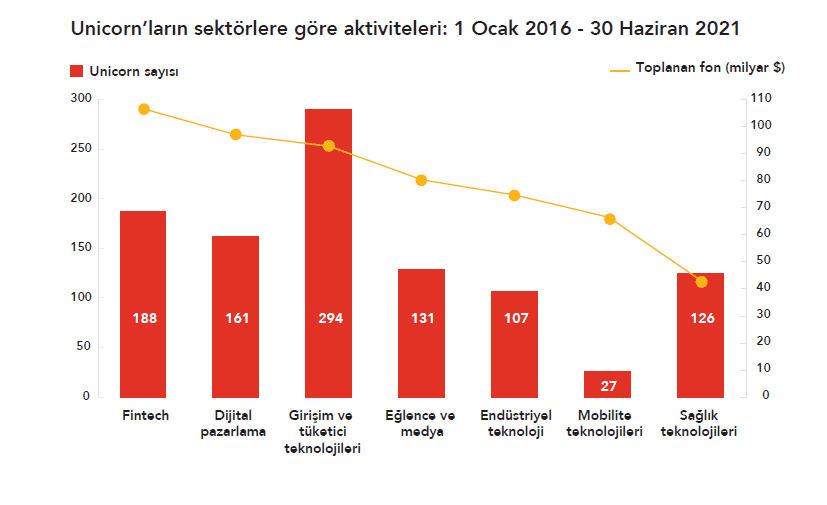