IMECE, developed by TUBITAK Space Technologies Research Institute (UZAY), will be safe with the transport cabin produced by Nurus with national and national facilities and the air conditioning system that will work according to it, until it is loaded onto the rocket during the buffer launch in the United States.

According to the statement made by the Ministry of Industry and Technology, after President Recep Tayyip Erdoğan announced that IMECE will meet with space on January 15, Minister of Industry and Technology Mustafa Varank visited USET at the facilities of Turkish Aerospace Industries Inc. (TUSAŞ) Akıncı. He did. During his visit to Minister Varank, the President of TÜBİTAK Prof. Dr. Hasan Mandal and Institute Director TÜBİTAK UZAY Assoc. Dr. Mesut Gökten accompanied him.

Minister Varank reviewed IMECE, which was developed by TUBITAK UZAY with state and national facilities. During the investigations, Varank was informed about the traveling clean room produced by the company Nurus, which will protect the satellite en route to the launch pad in the United States.

Varank and his entourage then entered the white room. Nurus Project Engineer, Merve Yağcı, regarding the clean room, said, “You are currently in an ISO class 7 clean room. But we also have an air purifier. This is an adapted room. to all heat, pressure and adverse conditions. We can collect 10,000 data per second in this system. Two You can consider it as a project. One is the container, the other is the manipulator. used the sentences .

“WE WILL SUPPORT IT TO GET A SHARE OF THE MARKET”

Evaluating after the reviews, Varank pointed out that transporting the national and national observation satellite to the area where it will be launched and loading it into the rocket requires other technology and capacity, and gave the following information:

“Previously, we sent our satellites to launch areas with transport cabins or containers produced by foreign companies. What could be our national and national capacities regarding the transport of the IMECE satellite to the area to be launched into space? With which companies can we bring this ability to our country”, and as a result, we reached Nurus company. In fact, Nurus is one of the most experienced companies in the furniture industry, but when you look at it , we are a company that develops very different technological projects with an R&D center.TUBITAK UZAY, in cooperation with Nurus, has produced the cabin that will carry our domestic and national observation satellite IMECE, which you see behind us. not only produced the cabin, he also produced this device with the machine you see here, which will remove the satellite from the USET, place it in this cabin and then placing it on the rocket that will carry it into space.” 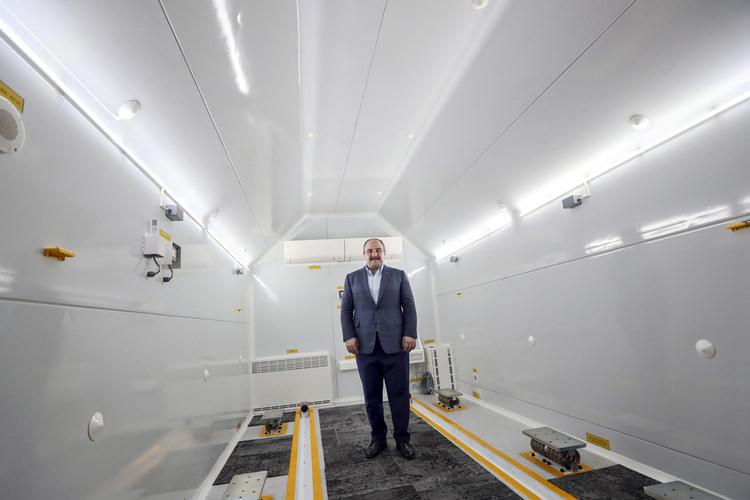 Varank said that although it appears to be a transport activity, the transport cabin is actually a walking clean room:

“You know, satellites have to be stored in very special conditions before they are launched into space. All production activities take place in a clean room. That’s why this cabin came into being, which has its own air conditioning system which will protect the satellite from all kinds of factors and provide clean room conditions, and protect the satellite from all kinds of impacts and pressure.In a short period of 14 months, our company has produced at the both this machine and the transport cabin you see behind us. We always emphasize, Turkey is making great efforts to move to a model that prioritizes growth with investment, production, employment and export.Two value additions are coming.The way to achieve value addition is through design and R&D.Here is a company that we classically think of in the furniture industry,with its own s engineers and technicians, has produced a high-tech cabin that you can see behind us that can carry satellites with its own design.”

Stressing that they are excited to bring this capability to Turkey, Varank said, “We could only buy its equivalents at twice the price. – clean room conditioned walk in our country for half the price. We will send our satellite, but not our company’s. We will also support him to gain a share in the international arena in this field. Since we can develop such sophisticated products at more affordable prices, we of course have a chance to get a share of our other competitors in the market.”

Renan Gökyay, Nurus board member and chief designer, also said that when the Covid-19 outbreak started, they converted the work rooms inside the factory into clean rooms at negative and positive pressure and that they were made available by hospitals in Ankara. “We are going to move satellites. He said, “We’ll do it.” I said. This product emerged in 14 months.” used the phrases. 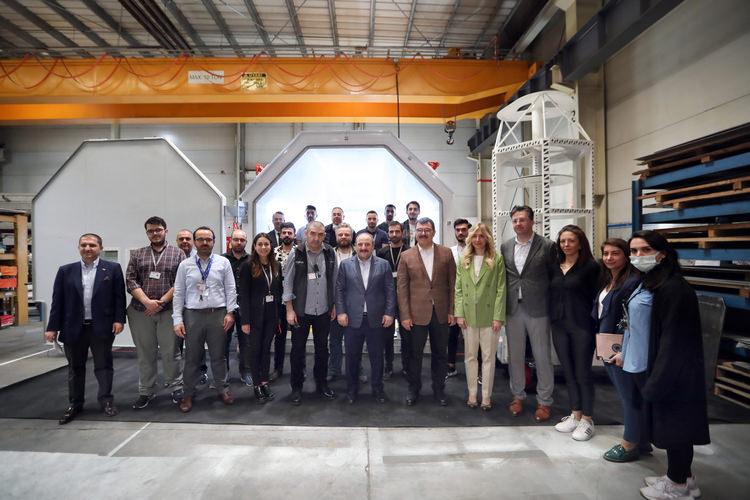 “It is a device responsible for the IMECE, which is a satellite of about one ton, to be taken in a vertical position from the place where it was produced, to a horizontal position where it can enter in the carrier, to enter the carrier and go to the station where it will be launched, and to be loaded on the rocket vertically in the position where the satellite will be launched again.” It can protect it from all kinds of humidity, vibration and harmful rays. It can protect the satellite in all kinds of falls. It can tolerate instant shocks and loads up to 20 times the satellite’s weight.”

Emphasizing that the product is domestic, except for a few sensors inside the cabin, Gökyay said: “There are certain things that the launch company requires. As long as he is traveling in this cabin, all In other words, the vibrations, the loads, the heat, the humidity, everything the satellite is exposed to is recorded. There is a data recording system that keeps it under it. Other than that, everything is local mentioned.

IMECE, which will be launched from the United States, will serve in simultaneous orbit to the Sun at an altitude of 680 kilometers and will display images within 48 hours of launch. IMECE, which will obtain high resolution images from all over the world without geographical restriction, will serve Turkey in many fields such as detection and diagnosis, natural disasters, cartography, agricultural applications. The design life of the satellite, which can be used for civil and security purposes, is expected to be 5 years.

In collaboration with IMECE, Turkey will have for the first time an electro-optical satellite camera with sub-meter resolution.

IMECE will be launched on January 15.