A TV interview with the head of the local chamber of commerce… Gunshots are suddenly heard during the broadcast… Reporter Alison Parker, who sees the shooter behind the camera, screams in surprise… Gunshots continue during the Parker’s screams… The camera falls to the ground and the images cut out… In the last scene, the shooter is screaming, we see the person’s legs moving away…

It all sounds like a movie script, right? However, what we describe is unfortunately not a scenario.

This chilling 17-second video was recorded by cameraman Adam Ward on August 26, 2015.

Adam Ward and Alison Parker were filming for a story at the time, unaware that they were going to be killed by a former colleague.

Ward and Parker were shot live by someone they once worked with. The gruesome images quickly went viral, being shared and viewed millions of times on social media.

Years have passed and despite the efforts of Alison Parker’s father, Andy, to remove the footage from the internet, the video still has tens of thousands of views. Finally, Andy Parker converted the footage of the murder into an NFT (Non-Fungible Token) in order to claim ownership of the videos.

If you wish, before moving on to Baba Parker’s fight, let’s briefly recall the shocking murder that took place live…

Former reporter Vester Lee Flanagan killed reporter Alison Parker and cameraman Adam Ward on air. The moment of the murder was captured by one of the victims, Adam Ward, on WDBJ’s live cameras. But it wasn’t just Ward’s camera that captured the murder.

Attacking his former colleagues with a gun, Flanagan made sure to record the event with his own cell phone. The killer shared the footage of the murder he took on his Facebook account.

So why would a person kill their ex-colleague live?

Although no one could figure out what happened during the live broadcast, details began to emerge after hours. Vester Lee Flanagan was on the same channel as Adam and Alison, as a presenter and reporter. However, he was fired in 2013 due to his poor performance. Flenagan, who did not want to leave the building when he was fired, was escorted out by police. Ward, one of the victims, had filmed the event of being thrown out of this building.

Just a day before he was fired, Flanagan tweeted about Ward, saying, “Ward reported me to HR even though we only worked once.”

Ward wasn’t the only name Flanagan had tweeted about. The killer also said of Alison Parker on social media: “Alison made racist comments. Despite this, they hired him.

The Flanagan killer sued the chain after being fired. In his petition, he claimed he had been discriminated against because he was gay and black. However, the $25,000 compensation case was dropped for lack of evidence.

The killer explained the real reason for the murder in a fax he sent to a television station after the incident. Flanagan, who said he wanted revenge for the Charleston incident in which 9 black Americans were killed earlier this year, admitted to killing Alison Parker and Adam Ward specifically for this reason. The murderer, responsible for the death of the two young people, committed suicide after realizing that he would be arrested after hours of police pursuit.

Andy Parker struggled for years to find, report and delete videos. Although Facebook and YouTube announced that they had deleted thousands of videos showing the moments of the murder, these images can still be accessed today.

In 2020, Parker filed a complaint with the Federal Trade Commission, accusing Google of breaking its own rules by not removing the footage of the murder. 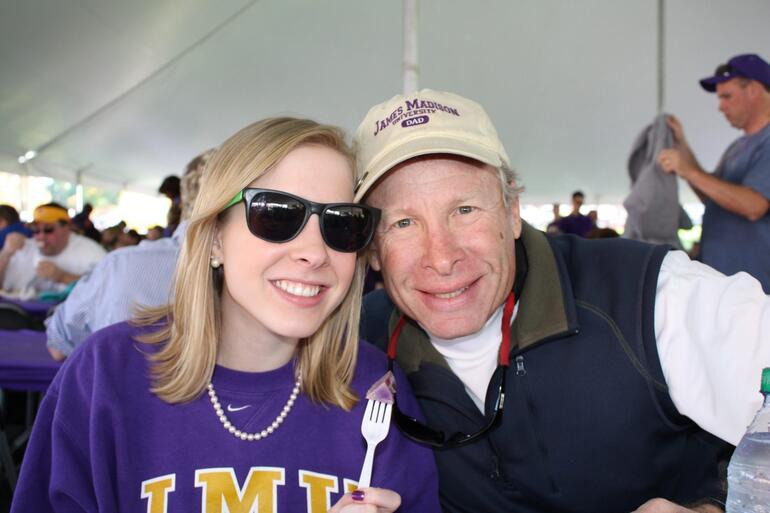 Andy Parker and his daughter Alison, who died in 2015

Father Parker previously told Insider, “Google is making money off my daughter’s murder. It’s definitely not in their interest to take down the videos, but I won’t tolerate that.”

The father, who has struggled with the world’s biggest tech platforms since losing his daughter, continues his fight to ensure footage of the murder is taken down.

THE COPYRIGHT OF THE IMAGES IS NOT THE FATHER

Parker, on the other hand, does not own the copyright to the footage of his daughter’s murder posted on WDBJ in 2015.

WDBJ’s umbrella organization, Gray Television, which owns the copyright to the original footage, refuses to assign the rights to Father Parker. Gray Television legal director Kevin Latek claimed the footage did not depict the murder of Alison Parker “because the video did not show the assailant or the timing of the shooting during the horrific event”, adding “Furthermore, our company has repeatedly offered to license the copyright to Parker,” he said.

Parker and his attorneys say the user license does little to compel social media companies to take down footage of the murder.

Andy Parker is hoping for NFT’s help at this point. Parker created an NFT of the murder video as a last resort to file a copyright claim. The father, who became a member of the NFT marketplace called Rarible in December last year, turned video footage of the murder into NFT here.

Parker hopes the move will give him legal status and circumvent the standoff with Gray Television so he can sue social media companies to take the videos out of circulation.

According to the law, the contents of the copyright holders cannot be used by different persons or institutions, unless expressly authorized by them. On the other hand, discussions on the copyright of publicly available content on social media with NFT continue. Andy Parker’s decision is closely linked to these discussions.

WHAT IS THIS NFT?

NFT, whose full name is Non-Fungible Token, stands for Free Token. In short, it shows that this is a one-of-a-kind digital asset that belongs only to you. NFT is called an identifier that proves ownership of digital products.

NFT is also defined as a unit of data stored in a digital ledger called blockchain, which confirms that a digital asset is unique and therefore not interchangeable. NFT is copyrighted through graphics rendered on the token.

We mentioned that NFT is blockchain protected digital units. So what someone who buys NFT gets is completely digital. This data can be many things; a gif, a video of a performance art or a live footage like Andy Parker…

A few questions arise at this point in the relationship between NFTs and copyright:

Does the digital data contained in NFTs infringe the copyright of the work in question? More importantly, do NFTs themselves include copyright?

Experts say that NFT ownership case law is still in its infancy and has already sparked a number of copyright disputes.

On the other hand, even if Parker’s NFT movement works, deleting copyrighted images only seems to be half the solution. Let us explain the reason as follows:

WHAT ARE SOCIAL MEDIA PLATFORMS SAYING?

YouTube points out that it is much more rigorous in removing images of Flanagan. “We are committed to removing the violent images taken by Alison Parker’s killer,” YouTube spokesperson Jack Malon said in a statement.

Facebook spokesman Andy Stone said the videos violated company policies and said: “We continue to remove them from the platform, as we have done since this disturbing incident occurred. is being produced for the first time.”

However, despite all these statements of “support” and almost 7 years after the incident, images of the murder continue to appear on social media.

A Washington Post review, published in the United States, found nearly 20 Facebook posts containing images of the murder, including those taken by the killer. Some of these posts have been viewed several hundred times, while others have been viewed tens of thousands of times and received over 1,000 likes.

Facebook removed all these videos from the site after they were spotted by the newspaper.

In a statement to The Washington Post, Andy Parker said he still hasn’t looked at the footage of when his daughter was killed, saying, “I didn’t, I can’t.” Parker also says he did not inform Gray Television of such a thought before creating the video’s NFT.

Latek said of Parker’s NFT, “Even though we’ve granted him a license to use it, those user licenses certainly don’t mean allowing him to convert our content to NFT.”

After these statements, Rarible, the channel where NFT was created, temporarily blocked access to Andy Parker’s token. The next day, access is reopened. The company did not disclose the reason for the blockage.

Andy Parker admits the NFT business has taken him into uncertain waters. However, she still thinks it’s worth a try for her daughter and says, “That’s all I can do.”

Let’s see how Parker’s copyright fight with NFT will end.

Compiled from news item titled “To erase daughter’s death from the internet, father created NFT of video” in The Washington Post.