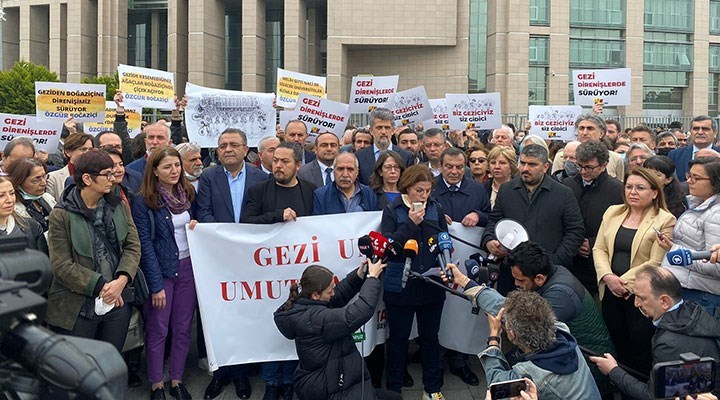 Due to the conclusion of the Gezi resistance case, this week I will take a break from my series of articles on “Fascism and Islamist Fascism”. Because it would be appropriate to evaluate the heavy provisions warmly announced. I will continue the series next week. Let us now try to analyze the meaning of the merciless punishments pronounced in the trial of Gezi.

The conclusion of the lawsuit brought against the Gezi/June resistance, on the instructions of the political power, while Turkey is going to the elections, makes sense. The severe judgments described in the case are known. Businessman Osman Kavala, who did not play a decisive or active role in the Gezi resistance, was sentenced to an aggravated life sentence, and other defendants including Can Atalay and Mücella Yapıcı, were sentenced to long prison terms of 18 years each, and the government’s special decision on this case reveals that it is making a political calculation.

For this reason, let’s first examine the reasons for the Gezi paranoia experienced by the AKP government and why it forces the law/courts so brutally.

a- As I said in my previous articles (last year) titled “Political Lessons from the Gezi/June Resistance” in the BirGün newspaper; Although the Gezi resistance lacked some political direction and program, it was the largest mass uprising in the history of the Republic, which unfolded as a social reflex against a government reactionary/Islamic. It had a significance that refuted and shattered all historical and societal assumptions of the AKP government.

2nd- Even though the Gezi/June Resistance was defeated politically, it won a “victory” in moral and philosophical terms. He showed society the way to salvation, He dissolved not only the reactionary-fascist block, but also the liberal theses. The liberal and conservative/Islamist rhetoric that the country will be democratized and a libertarian future can be established by overthrowing the “trusteeship” by an Islamist government has crumbled.

3- For this reason, the AKP leaders have perhaps best grasped the meaning of Gezi. Because he saw the destructive nature of social rebellion that he would lose power in ideological, political and social terms, never to be able to regain it.

4- Although Gezi resulted in a power that acquired a more reactionary and oppressive character because it was defeated, it left permanent traces and results like all great social revolts. For this reason, the government has always maintained that Gezi’s resistance is in fact an act of “terrorism”, that it is an “attack on the beliefs, namely religion, of the people” and bears the sense of an uplift of external origin. By repeating it, he tried to turn it into general acceptance and discredit the resistance. He could not.

5- There is no doubt that the side that determines all other characteristics of the Gezi uprising at one level or another; It was a broad and widespread grassroots movement in which millions of people, who saw their historical gains threatened, rose up to demand secularism and a new enlightenment. The phenomenon which gave the rebellion its character was the action of society for its secular rights. This is the reason why the Turkish flag turned into a resistance flag during the demonstrations. The flag not only expanded the legitimacy of actions, but also ensured their massification. This characteristic of the mass movement meant “political death” for the AKP government.

6- It was this secular characteristic that meant that the republican wings of the bourgeoisie also showed or felt sympathy for the action on one level or another, but more often than not implicitly. Westernist Turkish capital no longer wanted the Islamist government, for which it had done all its dirty work, but could not drive it out of power either.

7- The millions of people who participated in the Gezi Resistance without the mediation of any organization gave it a working-class as well as a secular character. It also shook the center of society, as it included all opposition and progressive forces ranging from center-left and right-wing Republicans to socialists, Democrats and anarchists of all colors and faiths. It was this feature that was scary.

8- The Gezi/June revolt broke the intellectual hegemony established by the religious-fascist AKP government and the Islamist movement with the invaluable support of the liberals. All the historico-political theses of the reactionary-liberal bloc which produced the social legitimacy of power have collapsed with a great noise. Liberal circles were stunned by this outburst of anger from below. He did not know what to do with his enlightened, secular and hardworking character. By fate, Osman Kavala was also close to these liberal and left-liberal circles. However, one must give one’s due; Kavala was not a “yes” but “not enough”, he voted “no” in the September 12 referendum.

9- The Kurdish movement, which sees only its “nationalist” demands, did not support Gezi. On the contrary, they put the “solution process”, which they carried out with the government, before everything else. Although the Kurdish movement later made a self-criticism, with this attitude they saw that they could never become a Turkish movement without a radical change of perspective.

ten- The Islamists, who suppressed the opposition with conspiracy deals like Ergenekon and Sledgehammer and attempted to completely take over the state, were in a state of power intoxication. They became arrogant and tended to interfere with people’s ways of life, thus eliminating secularism altogether. The Islamist centers of power were in insidious and brutal aggression. Gezi Resistance put an end to this hypocrisy.

After the brief but condensed assessment of the Gezi Resistance above, it would be useful to analyze the meaning of the provisions given in a few articles.

a- First of all, it should be noted that the decisions were taken in full compliance with the expectations of political power and that these are illegal provisions. It’s coarse and jerky. Osman Kavala was chosen as the victim. Moreover, he suffered a brutal reactionary-fascist attack. The reason they were chosen as victims is that the Gezi Resistance is a sustained outside effort to overthrow the Islamic government, and it has a profile they can easily claim. There is no other reason. This is why the trial appears as a frivolous and brutal act of revenge.

2nd- It is important for the AKP to condemn and register the Gezi resistance as an action against a foreign-backed and Western-led local and national power. For the AKP government, whose legitimacy has been shaken by the Gezi protests, whose alliances have crumbled, and which has no basis to generate acquiescence outside of Islamist and conservative circles, needs to recreate a space/basin of legitimacy. The way to do this is to pollute the Gezi Resistance by creating a pretext for an uprising.

3- One of the reasons the decisions made are heavy enough to make people say “it can’t be like that” is that they don’t believe in the decisions they make. Therefore, by making a “shock” gesture, they wanted to create a feeling of “I wonder” in society. It is understood that Goebbels, the Nazi Propaganda Minister, acted on the principle “The bigger a lie, the more convincing it is”.

4- Turkey will go to the elections in about a year under normal conditions. These elections are of vital importance both for the AKP-MHP bloc and for the forces of democracy. The Islamo-fascist alliance must absolutely win the elections, and the democratic opposition must defeat the ruling bloc. Therefore, the government wants to increase the pressure on society and spread the climate of fear before the elections.

5- As mentioned above, the decisions rendered in the Gezi trial also show great fear. The Islamist movement, which attempts to change the regime with predominantly criminal methods such as cheating, ambush, fraud, conspiracy, looting, looting, illegal wealth transfers, clandestine coup d’etat, violation of laws and the Constitution, very afraid of losing power and being held to account. Because of this, he tries to prevent a revolt or similar action from happening again by intimidating society.